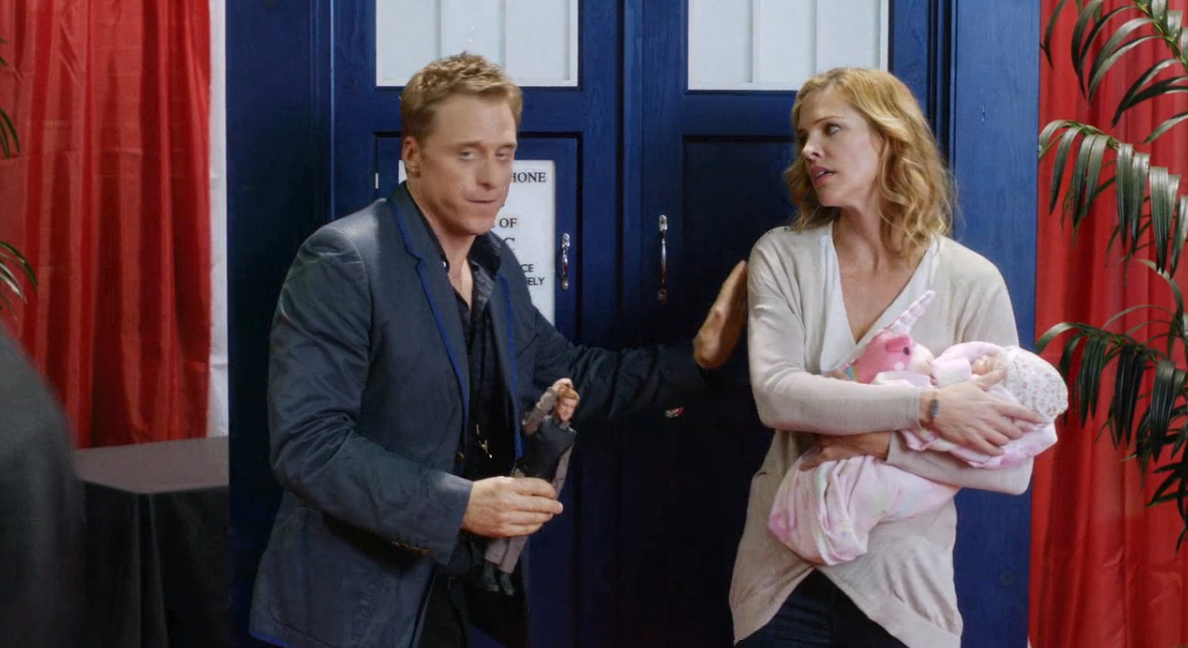 Alan Tudyk’s crowdsourced Con Man just finished releasing on Vimeo OnDemand. The web series comedy (comprised of 13 ten-minute episodes) tracks the ne’re-do-well sci-fi actor Wray Nerely, who was part of the critically acclaimed TV show Spectrum (cancelled after a half season), and who now makes his living on the sci-fi convention circuit. He’s a “convention man,” or “con man” for short. And he’s in hell.

His hell, mind you, is not mine. I’ve been to a few science fiction conventions. It’s not like I’m a die-hard regular on the con circuit, but they’re fun, and perhaps a bit more than that. My first was a Doctor Who convention in Detroit in the mid-Eighties. I just went for the day. Cosplayed the Fifth Doctor, because it was easier to get a beige trenchcoat on the cheap at a thrift shop than Romana’s pink one. Borrowed one of my Dad’s panama hats, used a twistie-tie to affix a sprig of celery to the lapel, and I was all set. Cosplaying wasn’t so big back then, but quite a few people had long multi-colored scarves. Sadly, I had to ditch the costume pretty quick, because I was roasting in it.

Anyways, at the convention I felt both weird and “at home” at the same time. At home, because I’d finally found other people who were as wild about Doctor Who as I was. Weird, because a lot of people at cons are really quite strange, so what did that make me? But it was fun. Sarah Sutton was there, told the obligatory story about Matthew Waterhouse showing up hungover for the final scene of Castrovalva. I bought a couple brooches. Some Target novelizations. Saw my first proper Troughton story, The Krotons.

San Diego Comic Con in 2008 was the last con I went to. It was huge and intense and overwhelming. It was then I realized that cons are actually alternate realities. They are not, however, governed by the mythologies of the science-fiction shows which ostensibly bring people together. They’re governed by an entirely different set of interlocking ritual concerns. Sure, some of that is simply the enactment of capitalistic consumerism, like the collecting of autographs and memorabilia. More importantly, though, is that conventions are a place where the marginalized “weird” people of geekdom can come together and have a place where their cultural concerns become “normal.” It’s perfectly normal to walk around in a Darth Vader outfit and geek out over your favorite shows. It’s perfectly normal to be geeky; if anything, the geekier you are, the more social status you are accorded. As such, conventions are kind of like Carnival, an inversion of the social order.

Well, except for the fawning over of celebrities. The actors and writers of SF shows are still at the top of the food chain at conventions… with a caveat. Because that caveat includes an implicit promise to hold up the values of science fiction and establish a marginalized geekdom in a temporary social center – which is to say, to embrace an alternate reality, and with it, to embrace the characters that one has brought to life – or, perhaps preferably, to embrace one’s place as a “celebrity.”…