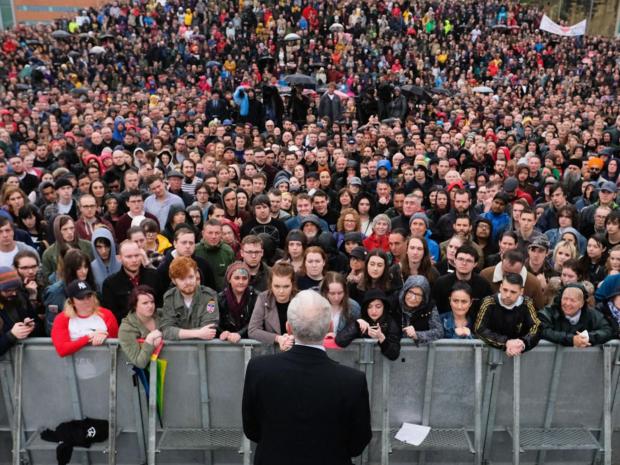 The Labour Party under Jeremy Corbyn fights the Tories to a hung parliament after years in the wilderness.  Go back in time and tell me that in early 2015 and I’d laugh in your face.  Not because I ever had anything but respect for Corbyn.  I’ve always considered him a man of seriousness, principle, and dedication.  And not becaue I think left-wing policies (or what passes for them these days) can’t sway people, can’t be popular, can’t win elections.  They can, and do.

(The truth is that, spread out across Labour, the SNP, Plaid Cymru – and taking into account the many people who vote LibDem for left-liberal reasons, and the many more people who abstain because they’re too left-wing to feel represented by any party, even if they themselves don’t necessarily understand themselves that way – the majority of the British public are to the left to some degree.  As Milton Friedman once bewailed, the public are irretrievably collectivist.)

No, I’d have laughed primarily because I would never have thought Corbyn would be able to get the nominations to stand for the leadership; and then I’d never have believed that the incurably cowardly and centrist Labour Party would elect him.  But he got those nominations – essentially because of a prank – and then the Labour membership stepped up.  Moreover, the people who had either been alienated from the party, or never attracted to it in the first place, owing to the poisonous legacy of Blairism, began flooding to join.

Initially, the Corbyn group showed serious lapses of judgement and competence.  Many of these were probably inevitable when people with no experience of party leadership started trying to lead a party in adverse circumstances… but, it must be said, many others were avoidable and unforced.

Even so, the main drag factors causing Corbyn’s persistently low polling and approval numbers in the pre-election period were the systematic media bias against him (across the spectrum from the hard right tabloids to the BBC to the supposedly left-wing Guardian, they either left what he said unreported or misrepresented him, often to the point of simple and outright fabrication) and the resistance from inside his own Parliamentary Party.  The comical palace coup failed to unseat Corbyn, as we know.  And there we saw a first real glimpse of the man’s grit, as he faced down not only a jeering David Cameron but a hefty chunk of his own party (his PLP being largely a bunch of centrists at best), going on to win a second leadership election with an increased majority.

Even so, most commentators expected – along with Theresa May, clearly – that Corbyn would lead the low-polling Labour Party over the cliff and into oblivion in this election.  Such is the unassailability of the entrenched and religiously-believed dogma of the neoliberal normal.  So imagine their astonishment when Corbyn started closing the gap – spectacularly.  The one difference being that, in election season, any media with any desire to pretend impartiality are more or less obliged to give coverage to both sides. …