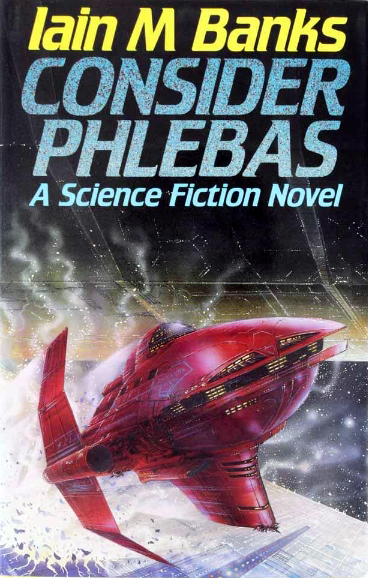 Consider Phlebas is not generally considered to be the best way to start the Culture series, and in fairness it’s not how I did, having previously read Use of Weapons and The Player of Games. And by almost all standards these are better books, and surely more likely to hook new readers. But Consider Phlebas has one significant thing over both of them: it is by far the best introduction to the Culture, which is to say to the specific idea of Iain M. Banks’s peculiar society.

It is not quite a Marxist society, although this is mostly because the notion of labor within the Culture has been so thoroughly upended that large swaths of Marx simply fail to apply. But it is blatantly a society a Marxist would love, along with numerous other stripes of western leftism. And inasmuch as “Marxist” is the standard epithet for “further left than we want to admit to the Overton window,” whatever that might be for a given speaker (and note, of course, that “cultural Marxism” is a phrase designed specifically to tar feminism and anti-racism with that brush), a post-scarcity liberal utopia that indulges near limitless sexual perversities and where everybody has a “drug gland”  offering highs on demand would certainly seem to qualify in an, if you’ll forgive me, cultural sense.

And it is certainly true that Banks’s underlying premises of the Culture are distinctly Marxist in tone; not merely his declaration, in his 1994 essay “A Few Notes on the Culture,” that he believes “a planned economy can be more productive – and more morally desirable – than one left to market forces,” a statement he follows with an extended critique of capitalism, but also his declaration that “the Culture, in its history and its on-going form, is an expression of the idea that the nature of space itself determines the type of civilisations which will thrive there,” a fundamentally materialist worldview that in many ways leads inexorably to certain Marxist and utopian premises, at least when coupled with Banks’s (seemingly emphatically untrue) supposition of a galaxy teeming with life.

The result is, as Banks has said in interviews, his idea of an ideal society, and this is clearly its appeal to no small number of its readers as well. But, crucially, that’s not the point. Nor is the point some “serpent in the garden” explanation of utopia’s fall or inadequacy. Rather, the point is that the utopia of the Culture is positioned in a world in which other civilizations exist, some very much hostile to the Culture, and the Culture, as a result, has the same interference-heavy quasi-imperialist policy as the Western liberal tradition that it elsewhere takes to its logical conclusion. Or, perhaps more broadly, that utopia is not dependent on any particular assumption of some sort of inherent goodness in human nature (“A Few Notes on the Culture” offers several explanations of what the Culture does with its megalomaniacs), nor is the utopia itself innately “moral.”

This, at least, is a point upon which Consider Phlebas remains topical.…