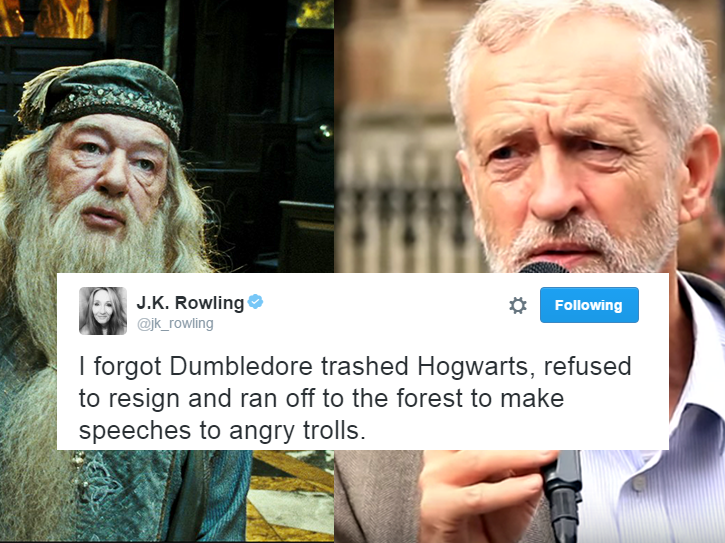 Well… it might not be a tent.  She’s a billionaire, remember.  This is something that people seem to forget, at least in effect.  But I imagine sulking would form a large part of it, even if it took place in very comfortable surroundings.  And snarking on Twitter.  That would be a big part of it too.  She’s done a lot of that about Corbyn already.  She has tweeted and retweeted truckloads of declarations of his unelectability, his incompetence, etc.  She piled on in the fake ‘Labour anti-semitism’ row, in which a handful of incidents – ranging from the piffling to the wantonly misconstrued to the fabricated – were talked up by the media into the chimera of a Labour Party stuffed with raging Jew-haters, with Corbyn as either Anti-Semite-in-Chief (Ken Livingstone presumably being his deputy) or as a passive permitter of all the internal Labour Party kristallnachts.  (This is all the more reprehensible, by the way, because there is evidence that anti-semitism is on the rise out in the real world.  But, surprisingly enough, it’s mostly not coming from Left-wing people who have issues with Israel.)

This isn’t to say that Corbyn is perfect.  I’m not here going to elaborate a full position on Corbyn.  If I did, I’d have many complaints to make.  But let’s just state something: when Labour loses on 8th June, the largest single factor will be Corbyn’s unpopularity, which is largely a media artifact.  I mean, you don’t have to especially admire Jeremy Corbyn to realise that when this manifestly sincere man is widely considered less competent, likeable, and trustworthy than Theresa fucking May – a woman he routinely trounces during PMQs; a woman so blatantly machiavellian that she does the Skeletor laugh, on camera, in the House of Commons – something funny is going on somewhere.

Of course, one expects the Right-wing press in Britain (which is almost all of it) to vilify the Labour leader, and especially to vilify Corbyn, a man with a long-history of principled socialist activism and campaigning.  The British Right-wing press thought Ed Miliband was a Marxist.  To them, Corbyn must look like an absolute lunatic.  Seriously, this is what they think.  Anyone who departs so far (which, by the way, is nowhere near far enough for me) from the Westminster consensus (i.e. the dogma of neoliberalism) must simply look, to them, like a twisted nutcase.  But the fact is, he looks like a twisted nutcase to most of the ostensibly Left-leaning British press, i.e. the Guardian, the Independent, and some magazines… well, just the New Statesman, if we’re honest.  (The Indy’s claim to be on this list is really just down to the fact that they have one or two left-leaning columnists.)…

END_OF_DOCUMENT_TOKEN_TO_BE_REPLACED

Jeremy Corbyn is a decent man, and he’s closer to my viewpoint that just about anybody else in mainstream politics, but he’s still basically just a moderate Social Democrat.  The media buzz about him being “hard Left” is ludicrous nonsense.   It’s a sign of the media’s extreme Right-wing agenda/viewpoint, a centre-ground shifted to the Right beyond anything known since the early 20th century, and the widespread (and very consciously inculcated) political illiteracy that now pervades the UK like a plague.

I think Corbyn’s usefulness lies almost entirely in the opportunity he presents for us to push the conversation in certain ways.  I will push him over the other candidates, and I will support the good stuff he says and does as Labour leader (if elected) because it’d be insane to do anything else.  The opportunity for propaganda is itself reason to do this.  The subsequent opportunity for anti-reformist, anti-Labour propaganda when Corbyn sells out – because he will, make no mistake… they always do, the structural logic of the situation makes that inevitable – will be worth having too, speaking as a revolutionary.

The Labour Party will be relieved to learn that I have no intention of practicing entryism.  I will not be paying them £3 for the chance to vote for Corbyn.  I have no illusions about Corbyn, or the Labour Party, or what Corbyn can do with the Labour Party, or Labour’s chances of winning in 2020 whoever’s leading it.  The last thing Corbyn needs is people joining, voting for him, getting him elected, and then never getting further involved in activism, or in helping him push the party leftwards (which is what will happen with the new members).

In many ways, Liz Kendall is a much better leadership prospect for the ‘really-existing Labour Party’.  Corbyn is the candidate for people like Owen Jones, who have an essentially fantasy-based idea of what the Labour Party is.  It’s a machine for controlling and containing the Left and Social Democracy.  There’s an idea out there that the Labour leaders are cowed into abandoning Left-wing principles by the media.  Bollocks.  You don’t climb the Labour Party’s internal greasy pole unless you are, in real terms, very very Right-wing indeed.  Labour is a thoroughly – even fanatically – neoliberal, atlanticist party which provides a kind of kennel for those elements who would otherwise be dangerously homeless.  Its main purpose it to sidetrack people who want Social Democratic policies, and channel them safely into a reformist project that is, essentially, a neverending roundalay.  Moderate the slogans to get elected.  Get elected.  Play it safe.  Get voted out when playing it safe lays you open to the vagaries of an unchallenged capitalist system.  Then play it safe to get elected again.  ‘Twas ever thus, to an extent, but especially since the Blair revolution, when the Labour Party was essentially remodelled into a slick, larger-membership, higher-profile version of the SDP.

I am so sick of the Labour Left’s delusions about what can be achieved with this rigged game. …

END_OF_DOCUMENT_TOKEN_TO_BE_REPLACED

Someone called ‘Bright Coat and Bravado’ (you can guess their favourite Doctor), posted this on tumblr.  Here’s a snippet:

I have a serious problem with  the “Cartmel Masterplan”. It’s not really about Looms, if you’ll believe that. It’s about The Other.

I can’t fucking stand the idea that the Doctor – or anyone – is “destined for greatness”.

I posted the following off-the-cuff response (which I reproduce here, opportunistically, because I quite liked it when I read it back):

On the whole, I love the Cartmel era, and have a lot of affection for the Virgin New Adventures… but I don’t like the idea of the Doctor as the recycled ‘Other’.

I don’t like the idea of him being ‘exceptional’ for his society.  Much as he is bound to be exceptional from a human standpoint, I think that should always be because of what he does rather than what he is.  I like the idea of him as someone who failed in his home context – “…scraping through with 51% at the second attempt” – and being a bit rubbish, a bit of a dilettante, a bit of a second-rater, a bit of a fartaround.  Probably because I feel like one of those myself.  But that’s okay.  I hate the winners vs losers view of life.  I hate the idea that one’s worth is determined by one’s ‘success’ in the competition of life, in carving a niche for oneself in a hierarchy.  I still more hate the idea of those kinds of judgements being made without taking into account the fact that some people start off at higher rungs and with greater advantages.  The Doctor should be someone who started off at such a high rung but who proved unsuited for it because of his infinite distractability, his vagueness and his inability to ‘play the game’… and also because of the moral sense – and the imperative to be a social actor – that he acquires from his involvement, from his breaching of the walls of the enclosed and reactionary envelope of Gallifrey, from his adventures and researches and friendships ‘out there’ in the muck and strife and pain of the universe.

The transformation of him into the reincarnation of a godlike founder figure from mythological pre-history injects a 80s/90s ‘epic’ sensibility into a 60s/70s ‘rebel’ storyline.  It is a post-defeat rationalisation overwriting an artefact that originated at a time of struggle.  The Doctor-as-drop-out-from-the-ruling-class is an (admittedly imperfect) artefact of 1969.  It gets renewed – even intensified – in 1976.  And then it gets downplayed and downplayed until – interestingly enough – Holmes gets his hands on it again at the end of the Trial in 1986.  But in the run up to the ‘long-90s’, Cartmel et al lay the groundwork for a potential vitiation of it.  Even as that crew take the show to angrier and bolshier territory than its has visited for quite some time, they’re also utiling an affect from various cultural strands that bigs the Doctor up and fetishizes him, and his ‘power’.