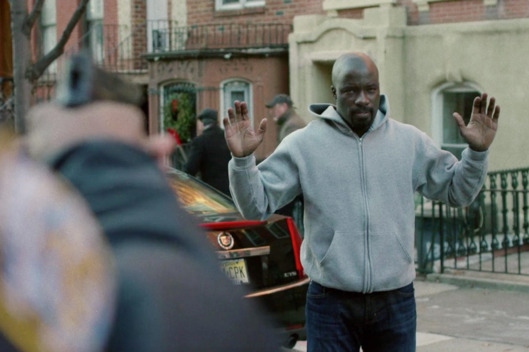 Okay, first of all, I’m aware that Luke Cage has been much written about.  I confess, I haven’t read much of the commentary.  Pure laziness.  I understand a lot of the criticism was about the show subscribing to a rather conservative form of Black ‘respectability politics’.  I can certainly see that issue, but I’m not going to concentrate on it.  Even so, I strongly suspect I’m still going to be reiterating stuff other people have already said.  Also, I’m a white British guy, so inevitably I’m at a disadvantage when it comes to understanding and criticising this particular text.

Oh, and SPOILERS and TRIGGERS.

The police investigate in good faith.  The police department treats a crime in the Black community exactly the same way they treat every crime they investigate, every week.  However, in the course of their investigation, they have to interview and question Black people… which causes them problems.  Many of the Black people they question respond with mistrust and hostility to the police, who are just trying to do their job.  They are immediately and irrationally touchy, respond with anger to reasonable questions, throw out accusations of harassment when simply being treated as the police would treat any witnesses, etc.  Much anti-police rhetoric is used by Black characters, the substance of which is belied by how we see the actual police behave.

Several key members of the police team, often in senior positions, are themselves Black.  The Lieutenant in charge of the detectives is Black, and is also a woman  – the police precinct upon which Law & Order is centred being run by, for most of the series, a Black woman cop.  Other members of the police hierarchy will be Black too.

The police will find themselves under immense and unfair pressure from the powers-that-be and the media to solve the case quickly, preferably with the arrest of a non-Black suspect.

There will probably be a scene where the police are mobbed by the media, who insolently ask them questions about whether they’re covering something up from racist motives, etc.  Media intrusion – which pushes an unfair narrative of racist cops failing to give the Black community justice, deliberately or through incompetence – will severely hamper the police investigation.…