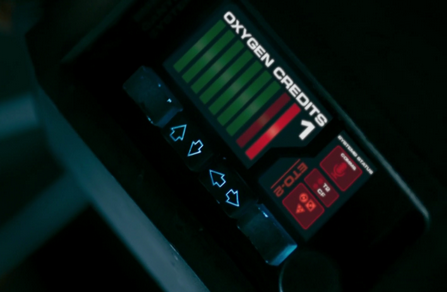 When the world is a danger to Doctor Who, does it raise up in rage or does it keep getting stranger?

Today, suffocation has a very specific meaning.  In America, you can tell upon which side of the divide someone stands by seeing what their t-shirt tells you about their ability – or otherwise – to respirate.  The divide in question is one created by a system of oppression that chokes people.  It chokes them figuratively, and then has the brazen impudence to choke them literally as well.

One statement of resistance is the simple proclamation “I can’t breathe”, which derives its power from its ability to inhabit both the metaphor and the brute reality.

Part of the peculiar power of the metaphorical referent is that it expresses a feeling of helplessness as part of a demonstration of strength.  Weaponised weakness.

‘Oxygen’ flirts with the SF trope of the post-racial future.  The people of the future don’t understand why Bill should face prejudice.  They don’t see colour.  Except that there is the business with the blue man (played by a white actor, of course, because whiteness is perceived as neutrality, blankness, non-ethnicity, vanilla standard humanity, upon which a fictional alien ‘race’ may be projected without confusing things).  But this seems like little more than a method by which the episode can not talk about race in a talking-about-race kind of way.  After the imperfect but forthright way ‘Thin Ice’ touched on this subject, this is a failing.  Apart from anything else, the refusal to depict class as imbricated with any particular hierarchical dynamics of race or gender is an especially glaring omission in an episode which, for once, explicitly concerns itself with class.

But even so, Bill dies in this episode.  She isn’t suffocated, but she is deprived of breath.  This happens in the context of a story in which the supply and denial of oxygen is the central iteration of hierarchical power in society.  And yet she survives at least partly because she submits to the helplessness enforced upon her by an external force of systemic domination – her suit.  She embraces negative capability.  As resistance.  That she has no choice only amplifies this fact rather than nullifying it.  Her tactical embracing of her own helplessness is what ultimately leads to her survival.

She is, of course, saved by a white man.  But this, while true and unignorable, is structural to Doctor Who… at least until the Doctor ‘does a Romana’ at the end of the series and chooses to regenerate into a copy of Bill.

(Shall we re-litigate this yet again?  There is no way in which texts can be purified.  There is no method whereby authors can ever entirely ‘win’.  The solution to this problem(atic) is dialectical.  It involves transforming society, not trying to amend the practice of authoring texts in the culture industries of late capitalism so that they become imperfectly ‘progressive’.  Apart from anything else, what does ‘progressive’ mean in a society progressing towards some species of global choking and suffocation?)…