Libertarianism today draws on several sources.  Ayn Rand is the best known, but the more influential is arguably Murray Rothbard.  (Rothbard’s attitude to Rand fluctuated.)  Rand is more influential for her ‘ideas’.  Rand is more accessible, despite putting up a superficial show of intellectualism.  Rothbard is harder to get a handle on.  Unlike Rand, he is a genuine intellectual – which is often a question of how one couches ideas rather than the ideas themselves.  And he develops.  And he writes long, involved, serious articles (though they get less serious-minded as he gets older).  I would argue that his influence is less in actual ideas and more in the surrounding spheres of aesthetics/style and tactics/strategy.  After all, in fusing libertarianism with conservatism to create paleolibertarianism, the libertarians consciously submerged certain libertarian ideas.  What succeeded – from the libertarian point of view – was arguably less the fusion than the style: the strategic attempt to use populist reactionary politics to further the ends of liberal economics.

Paleolibertarianism aimed to promote the relatively unpopular extreme free-market dogmas of libertarianism by joining them tactically to America’s powerful trends of post-60s reaction.  It succeeded to a great extent.  It pandered to, and (as far as possible) absorbed, extreme American cultural conservatism, racism, sexism, etc.  It took a powerful place in the ecology of American reaction.  It fed on the discontents of neoliberalism, and US imperialism, to achieve a quasi-rebellious presence in the mainstream of US politics, most of all in the person of Ron Paul.

We’ve talked about Ron Paul in previous instalments, and mentioned the publication under his name, or at least his ‘brand’, of infamous racist newsletters.  People familiar with the content of those newsletters will have been unsurprised by Paul’s recent slip up on Twitter, when he explained the troubles of modern America with a cartoon which featured racist caricatures of various ethnicities (Jew, African American, etc) uniting to punch Uncle Sam with one massive fist made of ‘Cultural Marxism’. 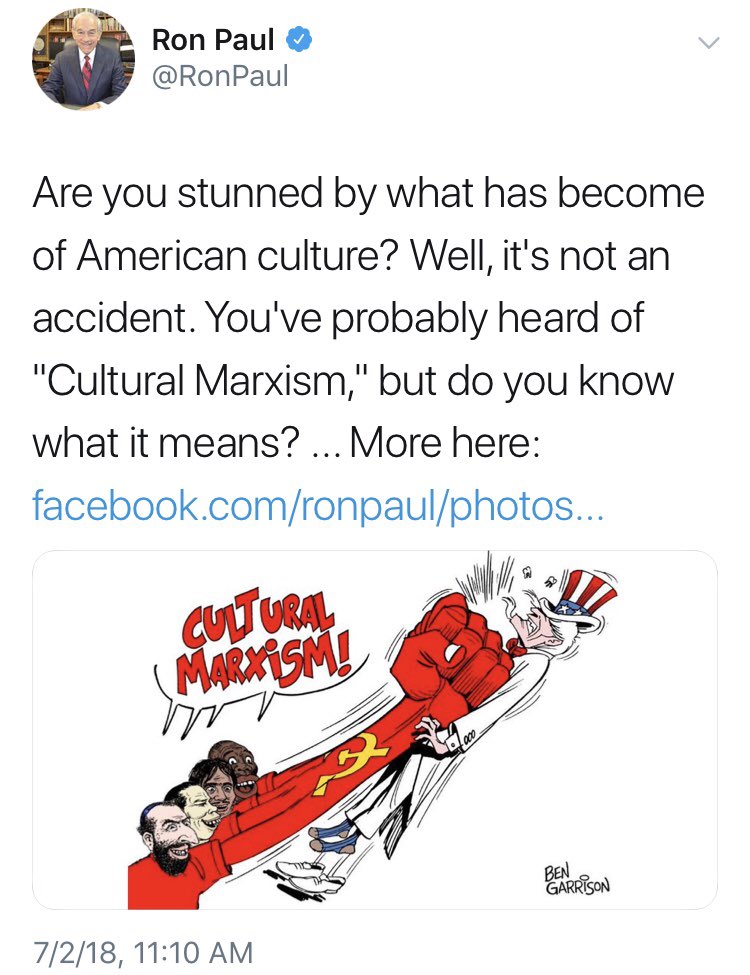 Some libertarians have defended Paul over the years, but others have denounced him, asserting that the contents of the newsletters is paleoconservative rather than libertarian, and that it has no connection to the great pantheon of libertarian thinkers.  There is certainly some truth to this.  Our own Daniel Harper has suggested to me, in discussion, that Paul is actually not a libertarian but rather a paleoconservative (if, I’d say, an eccentric one) with an opposition to federal regulation rather than regulation per se.  So, he’s maybe ideologically inclined towards a ‘states’ rights’ perspective which paleolibertarianism has, in my view, tended to flirt with opportunistically.  Paul, of course, formally rejects the contents of his own newsletters and new tweets.  But then a great many racists these days formally claim to not be racists.  (I often wonder if the people citing that fake Churchill quote about “the fascists of the future… call[ing] themselves anti-fascists” have ever listened to the leading lights of today’s fascist movement steadfastly and indignantly deny that they are fascists.) …

END_OF_DOCUMENT_TOKEN_TO_BE_REPLACED

Paul retired from politics in 2013, but his shadow is long on the libertarian Right.  After the above exchange, Paul – a former medical doctor and a fervent libertarian, indeed a ‘paleolibertarian’, a follower of the syncresis of libertarianism and far-right conservatism invented by Murray Rothbard and Lew Rockwell – suggested that the hypothetical man in the question should have a private medical plan.  “We’ve given up on this concept that we might assume responsibility for ourselves, that our neighbors, our friends, our churches would do it,” opined Paul sententiously. He later clarified his position on Twitter saying that “[t]he individual, private charity, families, and faith based orgs should take care of people, not the government.”  Recognisably a species of the same weaselly ‘Big Society’ argument employed around the same time by the coalition government in the UK as its Tory leaders tried to find a way to reconcile lethal austerity with their claim to no longer being ‘the nasty party’. Charity as a moral imperative, supplanting the need for socialised care. Chilly Victorian workhouse morality, dressed up as a plaintive cry for us all to be nicer to each other (so no surplus value has to be diverted anywhere useless).  Paul’s iteration has a more overtly Christian flavour, as befits American politics, and a tang of his ostensible anti-authoritarianism, but it boils down to the same thing: a thoroughly neoliberal impulse to relieve the state of its responsibilities to its subjects, while framing this as asking the subjects to take back control of their responsibilities. In Cameron’s version, the emphasis was more on countering a supposed culture of dependence, whereas in Paul’s the emphasis was more on encouraging individual liberty.  But we’re splitting hairs. The difference here is, as I say, a matter of emphasis. And we learn a lot from the fact that the same argument, with tweaks for tone, can be advanced from what are supposedly ideologically distinct varieties of conservatism.

Neoliberalism is a broad church.  This has been true since its birth, since the Mont Pelerin Society included Austrians and monetarists, neoconservatives and ordoliberals.  It is key to its success. The collaboration and cross-pollination of ideas speaks to its status as a class project rather than a distinctly ideological one.  It’s one of the tragic ironies of history that the revolutionary projects of the ruling class are (or at least can be) marked by tolerance and cooperation between different branches of ruling class ideology, whereas the revolutionary projects of the working class have tended to be marked by the exact opposite.…