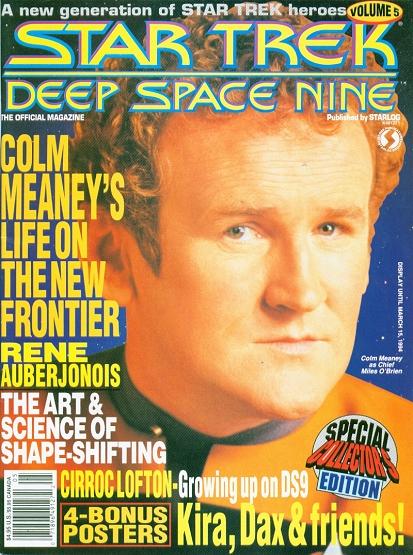 Here’s where I must make my “Fake Geek Girl” confession to all of you, dear readers. Though let’s be honest, it’s not like I ever pretended I was a real one.

All throughout, my coverage of Star Trek: Deep Space Nine has rested on the unspoken assumption that I was a fan of said TV series, or at least a casual viewer, at the time of its airing. I was not. I hint at it a couple of times during the preceding chapters, but the more accurate truth of the matter is that I was actually a fan of Star Trek: Deep Space Nine Magazine and the tie-in comic book series from Malibu. I did not watch the television show called Star Trek: Deep Space Nine during its original run (at least not regularly), although to be fair to me I *couldn’t*: Due to the way syndicated television worked in the late 80s and early 90s, local affiliates of large national networks could buy programming packages to show whenever they had empty space in their broadcast schedules when they weren’t airing network TV or local news. So this meant that a show made for syndication, like Star Trek: The Next Generation and Star Trek: Deep Space Nine, had no fixed airdate or station and could come on literally whenever and wherever. This was fine when there was only one show, but as soon as Star Trek: Deep Space Nine came along things got dicey, and in some regional areas (like, say mine), rival networks would actually air the two shows in competition with each other during the same time slot. No matter what the new Star Trek series looked like, it was always going to be a hard sell to ask me to give up my weekly time with a cast of characters who had become like another family to me.

That’s not to say I wasn’t interested in Star Trek: Deep Space Nine, of course. I would have loved to watch it more often than I did, I just didn’t want to give up Star Trek: The Next Generation for it. So for the first season, I was limited to tantalizingly brief out-of-context snippets of random episodes, the odd trailer and assorted PR Stills in magazines. Even that was still enough to fire my imagination, however, and I pined for the day I’d finally get the chance to give the new show my undivided attention. By the second season, things

had changed a bit: I still wasn’t able to watch the show regularly, but what I did have access to this season that I didn’t in the first was the Starlog-published Star Trek: Deep Space Nine Magazine. Granted it launched in 1993 alongside “Emissary”, but, as with most things like this, you have to remember I live in the back and beyond of everything: Pop culture stuff takes a while to trickle down to me. I only started reading with the second season issues and, even then, like all the things I was interested in, my corner market only got the magazine in sporadically at the very best.…