A Citizen Reviews a Misunderstood Classic 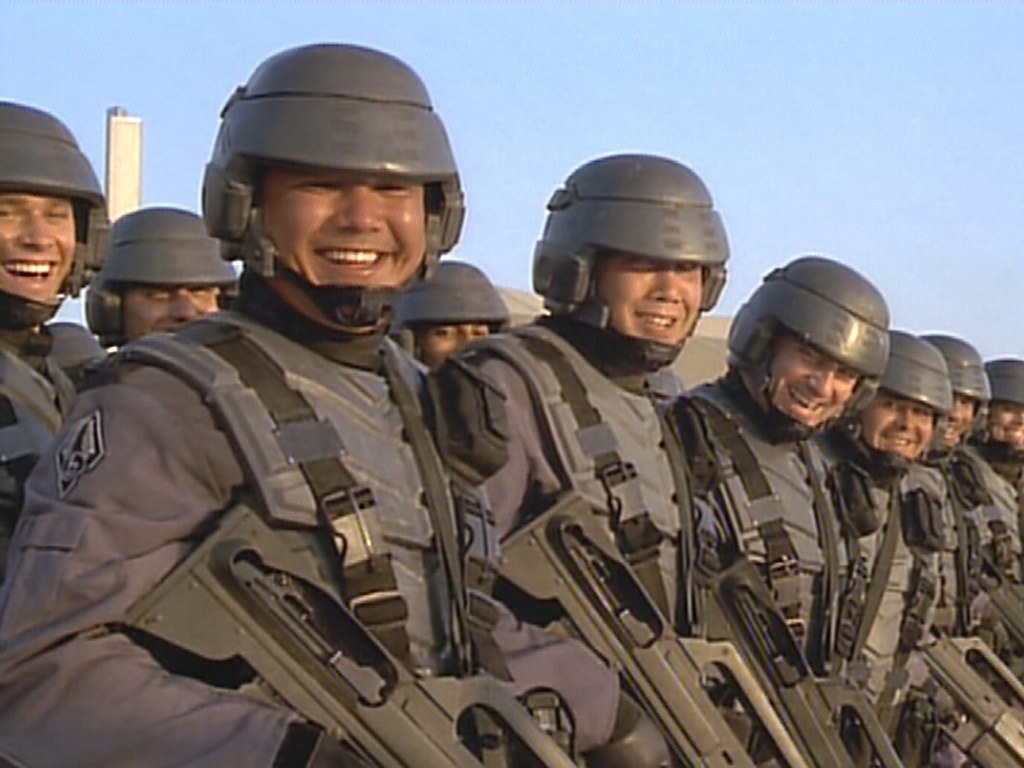 The following review is a guest post by Eye-Patch, a reviewer and columnist for one of the most respected arts and culture magazines in the Terran Federation.  In addition to his writing, Eye-Patch is a veteran, teacher and citizen.

It is now 19 years since the release of the motion picture Starship Troopers, directed by Mr Paul Verhoeven (non-citizen) and based on the book by Mr Robert A. Heinlein (citizen).  It is a film that was controversial upon its initial release and remains controversial to this day.  Upon its release, the film was accused of distorting the original intention of Mr Heinlein’s admirable original story, of representing an example of the film industry’s liberal and unpatriotic bias, of being insidious anti-government and anti-war propaganda, of being covertly pro-Bug, of being out of touch with the opinions of the vast majority of right-thinking people in the Federation.

In this appreciation, I want to argue that much of the controversy about the film stems from the fact that its message has been severely misunderstood, as has the nature of the media in the Federation.  Far from being dangerous and subversive, Starship Troopers is in fact a deeply patriotic film, dedicated to strengthening the Terran Federation, both morally and materially.

At the time of its release, many critics – on both sides of the political divide that we tolerate perhaps more than we should – interpreted the film as an attack upon our society and war effort.  Whether you thought this was a good or bad thing depended upon your point of view.  But a surprising agreement was reached across ideological lines.  The charges levelled at the film by mainstream critics were that the film might dissuade potential recruits from enlisting for federal service, erode the confidence of the troops already enlisted, erode public confidence in the war at home, and erode public confidence in the government and the Federation’s political system.  What these allegations amounted to was something very serious: treason.  Giving aid and comfort to the enemy.  The only consolation was that the Bugs are too savage and stupid to watch movies!

It was, and is, an odd idea.  It is not as if the motion picture industry is still run by left-wingers and liberals, the way it used to be in the olden days before the Federation.  We are too wise these days to tolerate a media who are unduly critical of the Earth government and the Federal system generally.  We would not tolerate a media geared towards undermining our war against the Arachnids on the basis of any spurious idea that it was somehow unjust.  It would be impossible, under our rational system of democracy, for such a thing to happen, since the output of the media is supervised by citizens, thus enforcing democratic controls, and the citizens are by definition the ones who have proved their loyalty.

It wasn’t always this way.  Way back in the 20th century, before the failure of the Western democracies, movies were made by what was called a ‘Hollywood’ system.…