The Impossible Has Happened

Review: The Impossible Has Happened: The Life and Work of Gene Roddenberry, Creator of Star Trek 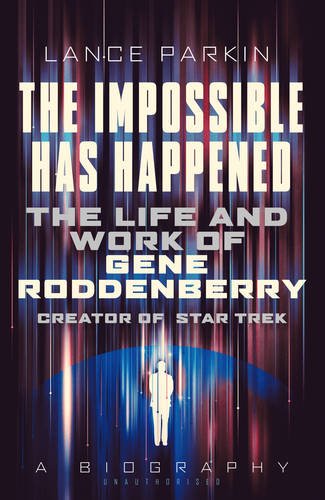 When I was writing my first volume of Vaka Rangi, I was faced with a dilemma on how to frame the book. I have little to no personal or nostalgic connection to the original Star Trek or its animated sequel so my episode-to-episode reactions were by definition going to be mostly as I saw it. But I still wanted to come up with something unique to say about this most important period of Star Trek history, so I initially decided to structure the book around telling as “real” a story about the franchise’s formative years as I could, with a careful eye towards historical mythbusting in general, in particular how it pertained to the shows creator, the ever-mythologized Gene Roddenberry. I soon realised, however, that this was a task far too massive for me to undertake given the scope of the project I had cast, and quickly found myself intimidated and overwhelmed by the sheer scale of conflicting stories and seemingly deliberate disinformation surrounding Roddenberry and Star Trek. While I still hoped to convey a general idea for what Star Trek actually was and was envisioned as being (and I do feel, and hope, I managed some degree of success), the behind-the-scenes stuff became far too complicated a topic for me to tackle with any aspirations of genuine comprehension.

Thankfully, the task was not too overwhelming and intimidating for Lance Parkin, whose new book The Impossible Has Happened: The Life and Work of Gene Roddenberry, Creator of Star Trek, is an unauthorized biography of the man in question that sets about clearing the air and getting at the heart of what sort of a man Gene Roddenberry really was, and how he both shaped and was himself in turn shaped by what Star Trek came to represent. Readers of this blog will no doubt know Parkin for his work with Doctor Who, but for those who might not know he’s also an accomplished writer and chronicler in other genre fiction circles. He’s previously written a similar biography of Alan Moore, as well as series guides for both Alias, His Dark Materials and the *entire* Star Trek franchise up through the third season of Enterprise. He’s also contributed to Star Trek Magazine and written a number of interesting critical analyses of the series independently, so he’s well poised to take on the task of retelling the life story of the man who perpetually seems to be at the centre of it all.

The problem, as Parkin himself outlines it in his Introduction, is that there have traditionally only been two ways of looking at Gene Roddenberry. Either he was a prophetic visionary messiah who dreamed a wonderful dream of a utopian future who fought and died for the ideals it stood for, or he was a lying, cheating, manipulative scumbag and self-promoter who saw that a passionate group of fans had taken a throwaway idea of his and turned it into something special and then set about revising history and making everything about himself so that he could cash in on it.…