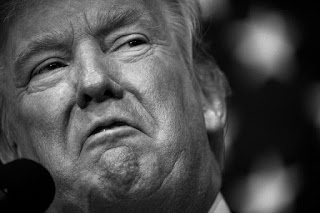 This time, Daniel has called Kit and Jack back to the WWA recording bunker, joined by James too this time, to talk about what it’s like to have lived a full year since Trump ‘won’ the 2016 US Presidential ‘election’.

This is what happened…

Oh… Jack is sorry for his mic problems by the way.  His generous patrons just paid for a Blue Yeti, so hopefully the situation will soon be resolved.  It’s just occurred to me.  I will control a mechanical Yeti.

Jack Graham wrote about Doctor Who and Marxism, often at the same time. These days he co-hosts the I Don't Speak German podcast with Daniel Harper.Support Jack on Patreon.
Monday Stumbling Blearily Into a Dunkin Donuts The Proverbs of Hell 28/39: Primavera