Victory of the Icon 2

Winston Churchill was the British Secretary of State for War in 1920.  As such, he was the British politician most directly and personally responsible for the Black and Tans, the notorious ‘special policemen’ (paramilitaries really) sent in to help the Royal Irish Constabulary put down the revolt against British rule.  The Irish people had rejected Home Rule in a referendum… only to find that the British were going to try to impose it by force.  This triggered the conflict – a nationalist revolt met by imperial repression – that is known as the ‘Anglo-Irish War’.

The Black and Tans went on a rampage of violence, targeting civilians alongside anyone suspected of involvement in the revolt.  Indiscriminate reprisals and revenge killings were the order of the day.  Many whole towns and villages were besieged and sacked, often simply as collective punishment for the killings of RIC officers.  They beat, shot, starved and tortured people.  They tore out people’s fingernails in front of their families.  ‘Murder squads’ disguised in civilian clothes roamed the streets.  The Tans sacked Cork and left the city centre in smoking ruins.  The RIC murdered the Mayor in front of his wife and son.

All this horror on the authority of Lloyd George and Winston.  An officer veteran of the Cork ‘campaign’, the man later to become famous as Field Marshall Montgomery, wrote later that it “never bothered me a bit how many houses were burnt.”

Churchill was once challenged about the behaviour of the Tans by Sir Henry Wilson.  Wilson recorded a conversation between himself, Churchill and Major General Henry Tudor (who was running murder squads) on 23rd September 1920:

Tudor made it very clear that the Police and the Black and Tans and the 100 Intelligence officers are all carrying out reprisal murders. … At Balbriggan, Thurles and Galway yesterday, the local Police marked down certain SFs (Sinn Feiners) as in their opinion the actual murderers or instigators and then coolly went and shot them without question or trial. Winston saw very little harm in this but it horrifies me.

Wilson was later assassinated by the IRA… but before we weep for him, we should bear in mind that he wasn’t against shooting people just for being in a political party opposed to British rule… he just thought it should be done ‘officially’.

Mind you, some of the atrocities often attributed to the Black and Tans were actually the work of the regular RIC, or of a different force of British paramilitary terrorists known as the Auxiliaries.  The idea of the ‘Auxies’ seems to trace back to Churchill.  He proposed the idea to a conference of ministers in May 1920.

The Auxies were smaller in their numbers than the Tans but were generally considered cleverer, more ruthless and more violent.  They were involved in the infamous ‘Bloody Sunday’ massacre at Croke Park in November 1920.  RIC men, aided by Auxies, indiscriminately sprayed bullets into the crowd at a football game, fatally wounding 14 civilians.  This was a reprisal massacre in response to the IRA’s killing of 15 British intelligence operatives.  In other words, in response to the killing of spies during a war, the British-run police forces opened fire on a crowd of non-combatants. 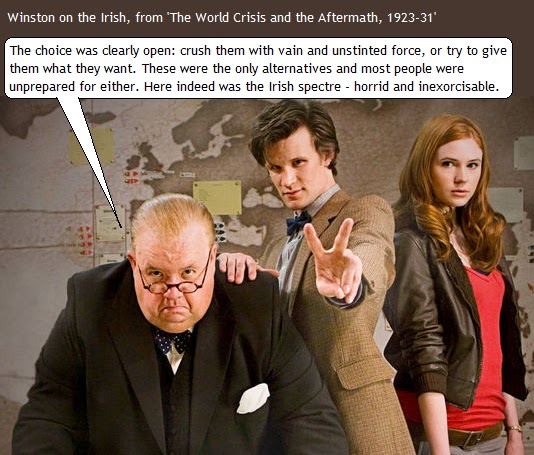 This is one reason why, when people say things like: “Say what you like about Churchill, he was the man we needed during the war”, I tend to ask: “Which war?”

Jack Graham wrote about Doctor Who and Marxism, often at the same time. These days he co-hosts the I Don't Speak German podcast with Daniel Harper.Support Jack on Patreon.
Time Can Be Rewritten 21 (Warmonger) The Grinding Engines of the Universe (The Caves of Androzani)

Shabcast 23, Part 2 – New Atheism is the Opium of Misogynists, Islamophobes, and Imperialists