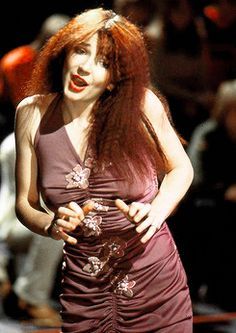 It begins with the sound of an orchestra warming up, strings humming in anticipation of an incoming trobairitz. Then, a four-note synth loop, which is played for nearly the entire first minute of the song, when it gives way to the song’s rhythm section. Twenty-nine seconds in, the wail of a processed guitar ushers in the vocal of Kate Bush, who delivers the opening line. “We’re all alone on the stage tonight,” she sings with equal trepidation and excitement. “We’ve been told we’re not afraid of you.” With that, the audience is hoisted onto the stage, and “Wow” commences.

The similarities between “Wow” and “Wuthering Heights” are largely structural. Both songs have arpeggiated hooks (“Wow” opens with the notes of a C major chord), followed by tense, melodically wrought verses, before breaking into the song’s triumphant chorus. “Wow” is shorter, its album version capping off at four minutes, compared to the four-and-a-half minutes of “Wuthering Heights,” with its intro which is built into the verse, keeping the song moving after its chorus. The chorus and verse of “Wow” are repeated twice each, with the intro and outro essentially built into the verses, letting the song flow smoothly while also breaking it into distinguishable segments.

This clarity is something some other songs on Lionheart lack, like “In the Warm Room” and “Fullhouse” (and if you recall, I quite liked “Fullhouse”). Bush wasn’t given adequate time to flesh her compositions out, and as a result Lionheart is a victim of second album syndrome. Just as, say, Give Em Enough Rope or Every Open Eye needed more oxygen and room to push themselves and make their songs come along, Lionheart needed more time than it had to bring its songs to life. There’s brilliance and innovation in it, and some of Bush’s finest songs, but too often there’s mere hints of what these songs could be (if Bush was going to give the Director’s Cut treatment to any of her albums, it should have been Lionheart).

As the one single from Lionheart to reach the top 20, peaking at #14, (“Hammer Horror” just barely made it into the top 40), “Wow” was a not-insignificant success for Bush. It’s tempting to ask why. “Hammer Horror” has all the theatricality of “Wuthering Heights,” if not more. Why didn’t it speed to the top of the charts like “Wuthering” and “The Man with the Child in His Eyes?” Maybe “Hammer Horror” was just too odd for the charts, with its sprawling shape and gothic paranoia. More crucially, it’s not tender, and if the charts are anything to go by, listeners like Bush when she’s tender. The three highest-charting singles of the first three years of Bush’s career, “Wuthering,” “Child,” and “Babooshka,” all lean into the mystery, sweetness, and tragedy of domestic life. “Wow,” meanwhile, isn’t domestic at all, taking place entirely on the stage. Yet the transference of setting means only another place for Bush to explore her favorite themes, as the chorus of “Wow” has a childlike sensibility matched only by “The Man with the Child in His Eyes.” It sounds innocent and, more importantly, earnest. “Wow” is tongue-in-cheek in regards to showbiz, but it’s happy to fly through it flaws and all.

Noticing these flaws comes from a basic awareness of how theater works. As we’ve noted, Bush’s approach to performance at this time is largely negative, focusing on the anxieties which come with it. Every song from “Symphony in Blue” to “Hammer Horror” has dealt with mortal terror of being seen (even “In the Warm Room” can be read as an audience member waiting to see a star). Lionheart’s stage is a place where the soul of the performer is laid bare. Each of the album’s songs can be read as a kind of horror story where a character loses their mind in the spotlight. This is straightforward in “Hammer Horror,” which uses gothic aesthetics as a framing device for the horrors of performance, and “Fullhouse,” which is a sustained howl of mental anguish. “Wow” isn’t necessarily less down on the stage than the rest of the album — instead of taking the voice of the performer, “Wow” seems to be from the audience’s perspective. “We’re all alone on the stage tonight/we’ve been told we’re not afraid of you” and “we know all our lines so well” suggest an audience well versed in how to respond to stars and performances.

Over the course of this blog we haven’t touched often on Kate Bush’s relationship with fandom. One exists, of course: there are fanzines dedicated to her, she’s made convention appearances, and as long as the Internet has existed there’s been groups dedicated to figuring out Bush’s location. Such a fandom was nascent in this period — being a Kate Bush fan mostly just meant buying her records. Being a fan of Bush’s music was a private exercise. Public speculation about her was done by voyeuristic journalists, who wrote such scintillating headlines and phrases as “Kate Bush Is A Sex Kitten,”“her flesh, her bones, her erogenous zones,” and this fucking travesty of the printed word (surely an article that begins by declaring that Kate Bush is a girl is going to be a Pulitzer Prize winner. Talk about her having “the breasts of a Victorian princess” and you have an all-time classic on your hands). It’s easy to why Bush would be resentful of this sort of treatment, especially when it manifested itself as a media furor over a photo of her wearing a pink top.

The truth is, of course, that this isn’t fandom. It’s media sensationalism. Bush understands true fandom, where someone gets to enjoy the beauty of a creator’s work in private. It also pertains to going out and seeing them in concert, having your favorite singer onstage in front of you and hearing your favorite songs live. This is the kind of invigoration that’s present in a number of Bush’s songs of the period: allowing yourself to be a swooning fangirl.

“Wow” is the paragon of Bush’s sometimes loopy and adolescent enthusiasm, in the vein of “Violin.” Its chorus of “wow, wow, wow, wow, wow, WOW! UnbelIEVable!” sounds like scribblings on an asylum wall, bolstered by the singing of a dame who’s had a bit too much MDMA. It’s almost like Bush is asking to be made fun of, with her play at wide-eyed innocence at the wonders of showbiz. Yet Bush is clearly winking at the audience, as her all-too-knowing performance in the song’s music video makes clear. In this era, Bush has a habit in videos of staring directly into the camera like she expects to shatter the lens with the sheer power of her gaze (she later supplants this strategy by staring past the camera longingly). As memorable as her early videos are, a lot of their longevity comes from Bush’s goofy miming. This may be why the “Wow” video has the reputation it has, with Bush flailing her arms around in circles while repeatedly crying “wow” like a maniac. The song is sheer mad giddiness, sounding like Nina Hagen let loose in the Hammersmith Odeon.

The elation of the chorus is belied by the knowing facetiousness of the verses, with the shit-eating grin they flash at showbiz. Bush’s sweet-natured delivery of “we think you’re amazing!” efficiently hides the fact those lines are probably written with gritted teeth. It’s not that “Wow” is bitter, but it’s taking a few potshots as it falls through showbiz. The first verse is rife with tension, laden as it is with the song’s intro, acting as something of a rehearsal for the chorus. There’s a clash of the rehearsed tendencies of the song with Bush’s more communal ones. To her, creativity is a collaborative act, where the audience and artist unite to move each other. “We’re all alone on the stage tonight” sounds like Bush’s invitation to the audience, as if the stage is an arena for both player and spectator. She has a number of songs about music itself. In something like “Saxophone Song,” music is a way of tapping into the beauty of the universe. Back at the beginning of her pirated discography, Bush ascribes musicality to a beautiful figure in “Something Like a Song.” To her, music is a sixth sense, something humans do in the same way we breathe. It’s like John Cage’s mantra “everything we do is music,” except it makes music both catalyst and end result.

The first verse treats spectatorship as a kind of prepared act in itself: “we know all our lines so well/we’ve said them so many times/time and time again.” The star is one half of the act, how their work is received is another. The character of the audience is as rehearsed as Bush is herself. In a theatrical act, both player and spectator are expected to demonstrate certain behaviors. The spectator is supposed to laugh at the right moments, break into applause at the end of the show, and tell their friends to go do the same. Verse two shows what happens when this process breaks down, with the actor onstage failing to reach his goals. He “dies too soon/to fast to save himself.” It’s not a great outcome for him. As Bush raises fingerguns to her head, she delivers the killing blow: “we’d give you a part, my love/but you’d have to play the fool.”

Overall, this is just a fun song. More than on any other song here, Bush is having a ball. She pulls off horror, Britishness (“he’ll never make the Sweeney”), and more importantly, naughtiness. “He’s too busy hitting the Vaseline” accentuated by Bush tapping her bum is a shoe-in for the best moment in any Kate Bush video ever. There are nice little details to the song, such as Paddy Bush’s mandolins in the chorus, and the ecstatic return of the KT Bush Band in guitarist Brian Bath and rhythm section Del Palmer and Charlie Morgan. Was there ever such an honest and thoughtful reunion on record? It’s hard to think of many.

Christine Kelley writes about speculative fiction and radical politics from a queer revolutionary perspective. Currently her main project is Nowhere and Back Again, a psychogeography of J. R. R. Tolkien's Middle-earth. Her first project was the now semi-retired blog Dreams of Orgonon, a song-by-song study of Kate Bush.Support Christine on Patreon.
I Point and Laugh at Archeologists (The Pyramid at the End of the World) You Must Not Allow Yourself to be Trapped Into Looking at It (The Lie of the Land)