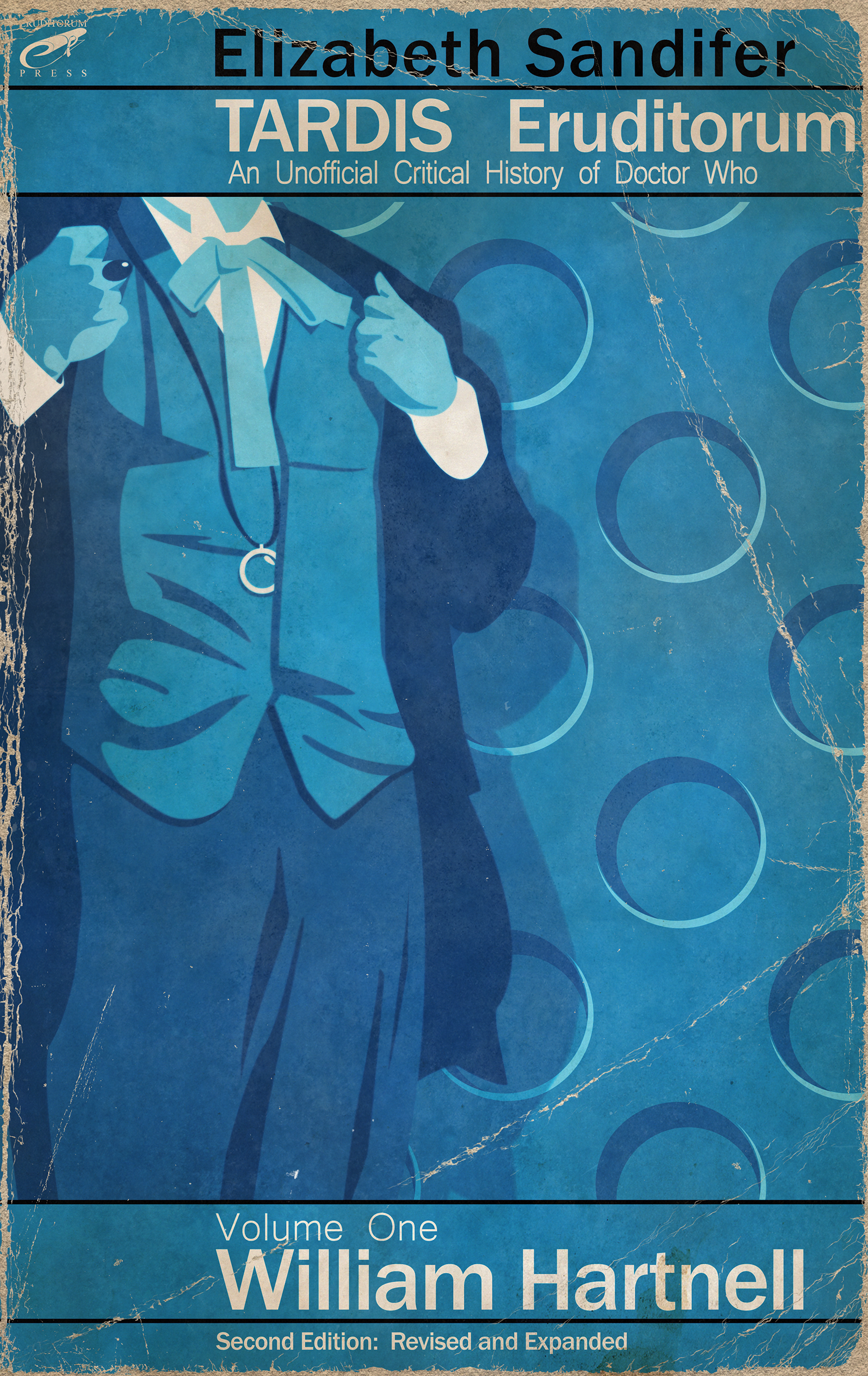 Eruditorum Press is pleased to announce the rerelease of TARDIS Eruditorum Volume 1: William Hartnell after several months of being off-sale. This book contains edited and expanded versions of all of the Hartnell-era blogposts alongside nineteen book-exclusive essays on topics including Dan Dare comics, David Whitaker's novelization of The Daleks, An Adventure in Space and Time, and a variety of novels and Big Finish audios.

The book is available at the following links.

If you've already purchased the book through Amazon or Smashwords you should be able to re-download it and have it immediately update to the new version. If you've already bought a paper copy, I regret that I cannot automatically update it for you. The contents of this edition and the previous one are substantially the same; the main difference is that my name is correct. There are two new essays, one on Big Finish's The Beginning, the other on their First Doctor Adventures box set, but these are deliberately minor treats presented as plums for obsessive people who feel obliged to rebuy the book as opposed to incentives to get anyone to do so.

Thanks to everyone who has bought a copy in the past or who intends to buy one now. And especially thanks to James Taylor both for the cover and for the update to it.

I'd love to get the updated one, but alas deleting and re-downloading it to Kindle is still getting the old version.

I notice when I go to "Manage Your Content and Devices" page on Amazon that some books I bought have an "Update Available" button whereas the new Hartnell book doesn't. Will that have something to do with it?

No idea. I know people who have successfully upgraded the book, but you're also not the first person to have trouble. Give it til Monday (I uploaded a new edition last night to fix a ToC problem) and if it's still not working get in touch with Amazon. But if they give a useful solution, please do report back.

I had to email customer support a few times, but they got it straightened out. Delete the purchase from both your device(s) and from your account in "Manage My Content and Devices," then without repurchasing or downloading the updated version, "Sync" your device. That worked for me, but that was after a few emails to support, so ymmv, David.

Enjoyed the new essays, and was mildly surprised to see you didn't outright hate "The Beginning" as I did, Elizabeth (not that you *loved* it, either, of course). The read on Quadrigger Stoyn was a good one, too. I didn't hate the First Doctor Box Set, but that second story is pretty wretched. My biggest gripe was how Ian and Barbara in particular are written poorly throughout, as you note.

Looking forward to the other updated books (and to looking up this post when they come out, since Amazon will probably make it hard to update again lol)!

Got it sorted in the end, with help from Amazon customer service. It sounded like the upgrade had to be sorted at their end, though rebooting my Kindle might have done it earlier.

Either way, glad to have the newest version!

"Delete the purchase from both your device(s) and from your account in "Manage My Content and Devices," then without repurchasing or downloading the updated version, "Sync" your device."

I tried that but it just removed it entirely. Is it because I didn't contact Amazon support first?

I purchased the book again, but it STILL has not updated...

Am contacting Amazon to try and get it sorted out.

Yessss, I was about to ask that! Can't wait to get my paws on it.

Yes. (It's why I've been slow getting the paperbacks out; it was going to be close enough that I felt bad. The problem recurs with Volume 2, but I've got to draw the line somewhere.)

I was hoping to ask something along the same lines, as I threw in extra during the Volume 7 Kickstarter to get ebooks of the earlier TE volumes (already have the paperback editions). Wasn't sure how those were going to be handled with the new editions coming out.

Got it. Many thanks, Elizabeth!

Excellent. I wasn't aware that the new edition would be free for current eBook owners, so this was a lovely surprise. Keep up the great work!

that is a stunningly lovely cover

Hi Love your work - any idea if the up dates will also be available through iTunes as that were I originally made the purchases?

I don't know. I'm currently having some difficulties getting the book out to iTunes, and once I do I don't know if they'll treat it as the same book, as I put them out through a third-party service and don't directly interact with their database.

Does this new update finally include the entry for The Massacre in the correct place? Not that I really mind, I already have the print version, but am upgrading to the kindle version now.

Edit: Oops, I just realised that the most recent print edition already had the Massacre in the right place, nevermind that.

What I meant to ask is whether the entry for Wonderland is in this version, or if it's being kept for the updated Troughton volume.

Hi - Just downloaded the new "Elizabeth Sandifer" version of the book from Smashwords (ePub version). I loaded it into iBooks on my iPad and noticed that your Chapter Heading formatting changes (from the "Phil Sandifer" version: chapter heading fonts are now much larger) have introduced some problems:

2) The heading changes have made the iBooks generated Table of Contents (accessed by the icon at the top of the screen) inaccurate. The unhighlighted chapter headings above don't appear. Also, selecting a chapter here now takes you to the last page of the previous chapter rather than the first page of the selected chapter. These issues also throw off the "'x' pages left in this chapter" counts shown at the bottom of the page. None of these are issues in the "Phil Sandifer" version. In this version, all chapters appear in the TOC and selecting them takes you to the expected place.

3) A couple of additional smaller things I noticed:
a) there's no page break before "The Daleks' Master Plan" chapter heading (this is in both versions of the text). This chapter starts in the middle of a page
b) the formatting of Terrance Dicks opening lines in "The Smugglers" chapter leads to a blank page between "stalks the ruin of a man" line and "Through the vortex" line. This blank page only appears in the "Elizabeth Sandifer" version

Feel free to contact me if you have any questions or want more details. I love these books and want them to be their best versions possible. Best Wishes.