“Just listen.”: Loud As A Whisper 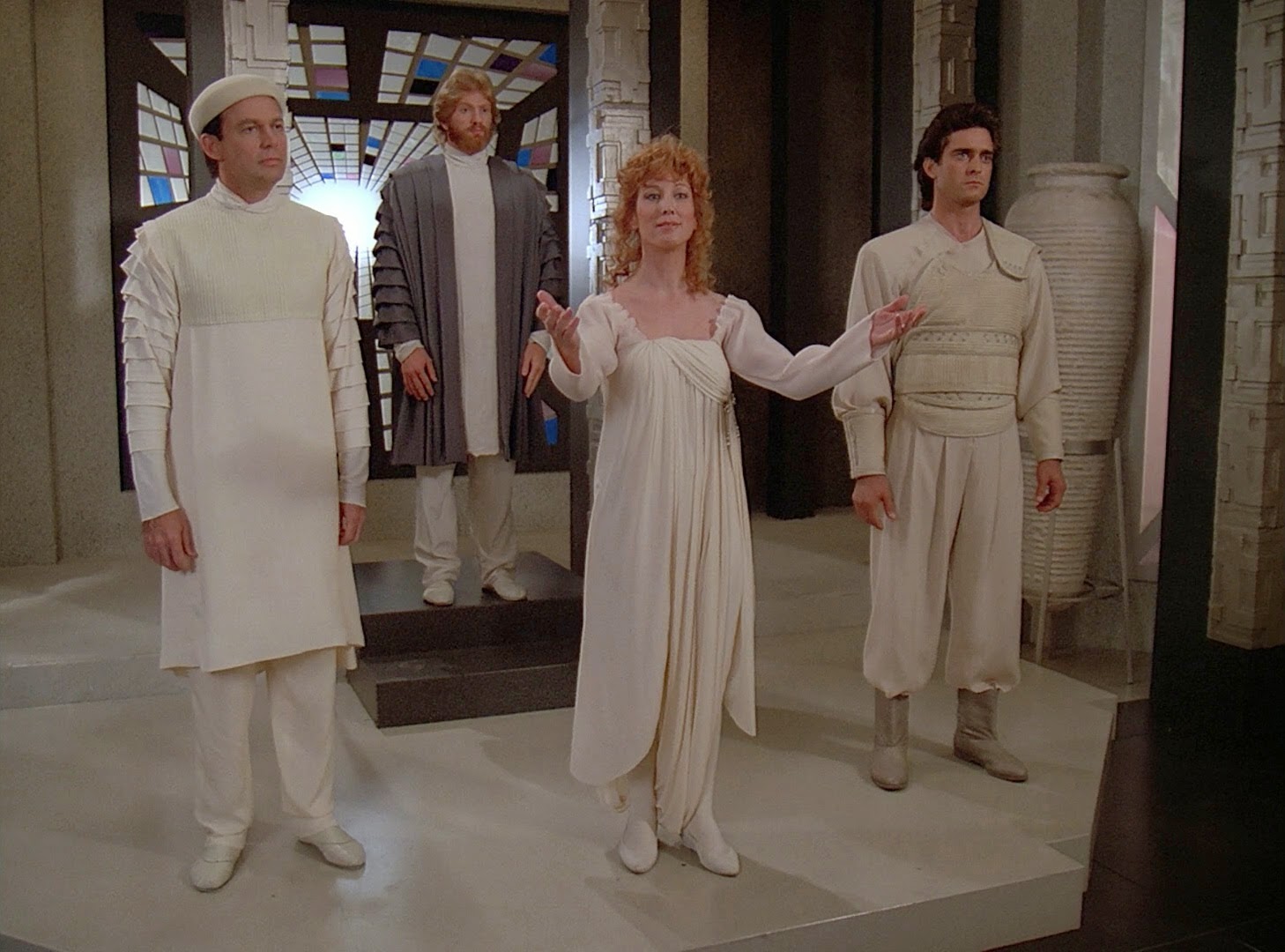 Like “The Outrageous Okona” before it, “Loud As A Whisper” is another episode inspired by an actor instead of a pitch. Howie Seago, who plays Riva, is deaf himself, and he and his wife (an enormous fan of Star Trek: The Next Generation) approached the producers with the idea of doing a story about deaf people to dispel common misconceptions and to tell a story from that perspective. Even Riva's chorus comes from Seago, who had famously played the lead in Peter Sellers' adaptation of Ajax where the play's Greek chorus had been reconceptualized as a team of translators.

Seago jokes he only got into the producers' offices because they were once again out of scripts thanks to the writers' guild strike and had nothing else to do, but I'll bet they bought the pitch because it was a really good story too. The deaf community themes are as good as you'd expect, and are quite successful in showing Riva to be a person who, while different from others in ways that gives him unique advantages and disadvantages, is no more or less then them as a result. My favourite scene here is naturally the one with Geordi on the bridge, where he and Riva bond over the commonality they share. But this isn't just a story about hearing, it's also a story about listening, and the rhetorical pirouettes the show does to meld the two themes are truly elegant.

Most obviously, we have the two warring factions of Solais V. Riva believes that the source of all conflict stems from a lack of communication and understanding, and his negotiation method involves helping both sides realise they share some sort of common ground. And yet Riva too is unwilling to listen: He arrogantly dismisses the crew's attempts to fill him in on the centuries-long war, declaring that all conflicts all over the galaxy are the same, and that he has the tools to resolve any conflict anywhere it might crop up. From the moment he sees her, Riva immediately starts hitting on Troi, and their “dates” consist mostly of him talking at her and trying to impress her with sickeningly faux-poetic platitudes. This episode is a terrific showcase for Marina Sirtis in general, but I particularly love the way she has Troi constantly roll her eyes in exasperation at the camera whenever Riva starts acting particularly obnoxious: The script feels like it wants the affection to be mutual, but Sirtis makes Riva's advances come across as pompous and silly as they are. Which just makes her scene with Captain Picard at the end all the more sweet.

(I'm not a huge fan of Riva's chorus being so transparently the id-ego-superego model, even though it does help add to the episode's theatrical performativity, but the one area where this does help us is by noticing that Riva speaks mostly either through the id-guy, when he's lecherously hitting on Troi, or the ego-guy, when he's rambling on to Picard, Riker and Worf about the diplomatic pop philosophical worldview he's developed through his years of experience as a mediator.)

But of course, Riva is only damning himself, as his unfettered arrogance ends up costing the lives of his interpreters, rendering him for the first time truly unable to communicate with people. And of course it's Troi who, through a masterful bit of psychology, helps him move beyond his distraught short-sightedness and remind him to live up to the ideals he so often tries to instil in others. It's a classic Star Trek: The Next Generation type of scene, and though there's not a whole lot more to add to it than that, it did get me thinking about Riva's real-world counterparts. Foreign policy, in particular international development, is a field whose history is littered with the exact same sort of blinkered arrogance that Riva initially displays here. So much destructive policy has been enacted because policymakers, aid agencies, charities and ideologues have figured that every problem around the world is basically the same and can be resolved through a blanket application of the exact same ideological toolkit. It's the very logic that got us the wildly catastrophic Modernization and Dependency theories, and that's before getting into the vested interest government powers have in maintaining a kind of Neo-colonialist status quo.

The solution to so much of the world's unrest and malaise, which is so obvious nobody will ever do it, would be to think and live anthropologically. To actually go to people who are in need and suffering and to actually ask them what they feel they need to make their situation better. To listen. This can and should be tempered through discourse gleaned from the sharing of positionalities, for nobody can see everything from any one given perspective or vantage point, but the most important thing is *always* to get to know your contacts and the unique challenges they and they alone face. This is the lesson Riva had to learn, and it's also why ability issues make up so much of this episode's subtext: People shouldn't be making assumptions about and decisions for disabled people any more than they should for people of other countries, other ethnicities or other planets. The only way to truly learn from someone is to listen to what they have to say, to hear their unique perspective. the story of every person or group of people is special in some way, and one of the most basic, yet also one of the rarest and most profound, respects we can give to someone is to let them share that with us and to listen to what they have to say.

(In this respect I have to say the only real dissonant note I found with “Loud As A Whisper” was the scene in sickbay where Doctor Pulaski offers to restore Geordi's sight with either ocular implants or tissue regrowth. It was written into the script because the team was toying with the idea of removing Geordi's VISOR at the time as LeVar Burton's eyes are so expressive, but the show never went anywhere with it and, the way it's written, it really seems to work against the themes the episode is working with elsewhere. If nothing else, it flatly contradicts not only Geordi's scene with Riva here, but with Doctor Crusher way back in “Encounter at Farpoint”.)

Another way to read this theme can be found in slightly more esoteric territory. The preponderance of Riva's “id” and “ego” forms in this story can be compared with a fixation on the “ego” in the general so many of us have in real life: The ultimately artificial and dangerous faith we place in the supposedly irreducible notion of the “I”, the singular individual fundamentally separate and distinct from everyone and everything else in the universe. Trans- and posthumanist themes are starting to play a very significant role in the unfolding text here, and it's this conception of the ego that underwrites the Church of the Singularity approach to transhumanism. At a basic level, this is also rooted in assumptions we make about the experiences of others based on our own perspective: A refusal or inability to listen to others it what allows people to make sweeping, impulsive judgment calls about metaphysics, philosophy and destiny, and is demonstrative of a retrograde solipsism that would deny our kinship and continuity with the rest of nature. I think it's our responsibility to move beyond not our uniqueness, but our worship of the ego, in all things.

Fittingly, Kei and Yuri's names are carved into the negotiation table Geordi replicates for Riva during the episode's conclusion. There may have been conflict and tragedy, but, in the end, both Riva and the Solaians have grown into better people because of it. 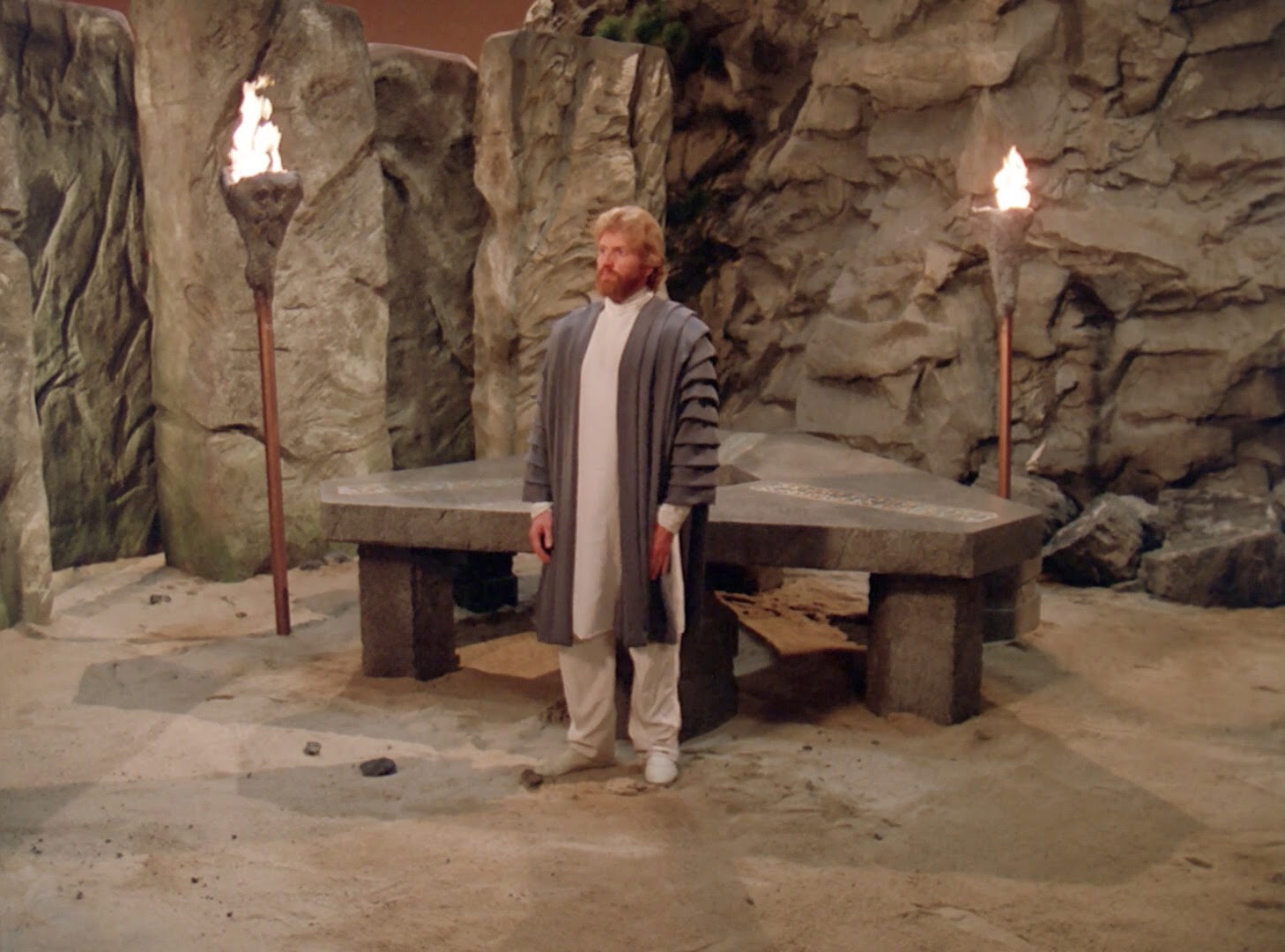 I didn't realize this episode was built around the actor, but I think the earnestness that comes with it is what elevates it above typical "we escort a diplomat, but we kind of have to save the day" type plots.

This episode has great things for Brent Spiner to do that are so far the opposite of the kind of usual super-powered things that we're loaded with when Data is used heavily. His strength as a translator here is inspiring stuff, and my favorite moment of the episode has to be when Riva finally thanks him and it takes him a second to realize, (paraphrased), "oh, thank me. Yes, you are most welcome."

Like K above I had not idea that this was designed around the actor. That for me just adds to the beauty of this episode which is one of my big favourites because of it being about listening, and especially its making the skilled negotiator flawed and able to learn a key part of the heart of the story.

Listening is perhaps one of the most fundamental skills we need to learn to move forwards and to be able to enact true change in ourselves and the world. I know I have had to recently, where I received some fairly harsh critical feedback on a workshop I helped deliver from my co-facilitator. Even if the other we are paying witness to has bias and their own deep issues that affect their ability to hear you (which I experienced), they are still asking for a certain, even if dissonant voice to be heard.