Outside the Government: The Eternity Trap 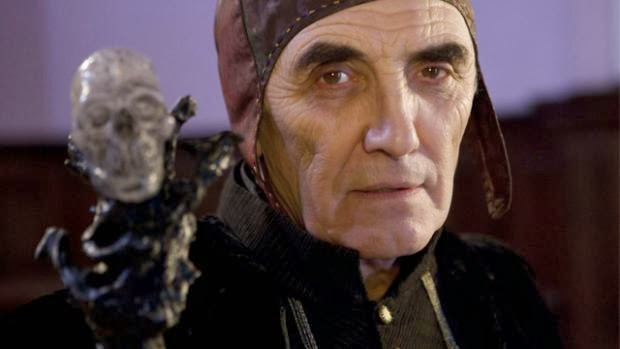 You seem to have completely confused rationalism with its opposite, empiricism. You should take greater care.

Wasn't the pilot of K9 brodcast a couple of days after The Wedding of Sarah Jane Smith? Are we not doing that, then?

I haven't actually seen this one so I'm totally unqualified to comment but based purely on your description it occurs to me that, rather than a rationalism versus superstition debate, this episode is aiming rather lower. Surely it's just a standard Scooby Doo plot that's got itself too hung up on the 'old janitor's' motivation and forgot to be on the side of 'those meddling kids'. The original Scooby gang always believed totally in the irrational manifestation until the mundane reveal. Doctor Who despite its alchemical core usually assumes a scientific basis until the 'real' often occult motivation is uncovered which is then retconned within its own narrative and resolved with some timey wimey gobbledygook. It's a difficult task that not all writers can pull off.

The original Scooby gang always believed totally in the irrational manifestation until the mundane reveal.

Well, Shaggy and Scooby did (probably due to their chemical addiction to mind-altering Scooby snacks. In the original series, Velma, Fred and (to a lesser extent) Daphne always sought a rational explanation for what was happening with the goal of trapping "the monster" and finding out who it really was. I remember as a kid being deeply disappointed when the series was retooled to allow for storylines with actual paranormal bad guys. The addition of Scrappy Doo didn't help.

The magic/science conflict has always been an issue for DW, especially in NuWho where, let's be honest, the sonic screwdriver is blatantly treated as a magic wand. Not to mention we have stories like "The Shakespeare Code" with alien witches whose "science and technology" consist primarily of spoken incantations and "Hide" which says that haunted houses are the result of aliens and time travelers faffing about while casually affirming that psychic abilities are real.

I don't see how use of the screwdriver is worse than old Who, where the Third Doctor could solve any problem by reversing the polarity. And I remember Planet of the Spiders casually affirming that psychic abilities are real, too.

Having written *extensively* on Scooby-Doo, I'll just say I think Anton B. is largely correct, if necessarily simplifying the premise for the topic at hand.

Thanks for this, Phil. I always enjoy seeing people point out that science fiction is not actually the domain of the arch-rationalist crowd, no matter how fervently a certain subset of my franchise's fandom might cling to that notion.

It's an argument I'm going to have to look it in more detail myself in, oh, between three to eight years I'd say.

Shaggy and Scooby had some supernatural abilities of their own - for example, the ability to conjure costumes from thin air and change into them in the half second between running into a room and the villain following them in.

Just wanted to slip in here and politely request that Phil revive the TARDIS Eruditorum video review thing when we get to "The Eleventh Hour", just to do a similar comparison between the aesthetic styles of that episode and the RTD era that Phil did in his "Leisure Hive" and "Time and the Rani" articles.

Josh, it was indeed your excellent ruminations on Scooby Doo which I enjoyed reading immensely some time ago that inspired my comment.
Perhaps you can clarify the comparison I was trying to make between that show and Doctor Who plus its spin-offs. Which was this -
The Scoobyverse is one where the paranormal.is accepted as at least possible until disproved whereas the Whoniverse actively dismisses the paranormal because science while constantly having its rationalist preconceptions upturned by wibbly wobbly potions.

Some of them do. It's the same group of modern (male) Nerd Culture people who throw a fit about Doctor Who not having a consistent model of time travel, who get really tetchy about the differences between "science fiction" and "fantasy" or who think Star Trek's fundamental value is teleological technoscientific futurism. And who write Star Trek: Year Four stories about the Large Hadron Collider.

Puzzlingly they don't seem to have a problem with Star Wars.

I don't remember a generalization -- just that THAT haunted house was the result of aliens and time travelers faffing about. Then again, so was Gabriel Chase.

I think that's largely accurate. I personally tend to be more open to the reading that the supernatural actually textually exists in the world of Scooby-Doo (and thus the criminals are literally "fake ghosts" whose crime is using fear and intimidation for selfish ends) then most, but I know that's a minority opinion even more controversial then my shipping of Shaggy and Daphne.

Doctor Who I see as having its overall take on this, just like its overall take on anything, changing depending on who's writing at the moment. But as a general rule, we do seem to get the famous plot archetype of "something that looks paranormal is going on, but really it's aliens" that dates to at least the Hinchcliffe era happening quite frequently. Though now I'm treading on territory of people a bit more qualified than me.

Regardless, I don't think either show is really for the Arch-Rationalist crowd.

I have to admit that when you start going on about "alchemy" and "material social progress", I generally have absolutely no idea what you're talking about.

Coincidentally, one of my Twitter friends tweeted a link to a Tumblr post yesterday saying the real power of Scooby-Doo (it's equivalent to "material social progress", if you like) is that the monsters aren't monsters. The monsters are lies by grown-ups who want to convince you to do something. Other adults might believe these lies. And the way you fight the lies is by thinking about things and coming to your own conclusions.

Might that be the analysis Chris Sims did awhile back? Because he and I have similar takes on the show. We have parallel readings we arrived at independently of each other, but that (I at least feel) are compatible.

IRC, This episode and Nightmare Man terrified me on first watch (as a college student) just because he kept appearing from nowhere when you weren't expecting it. Never mind explanations and logic, someone jumping out at you and going BOO! is still frighting, if not outright terrifying.

'Material social progress' means 'rising living standards', apparently. So basically Doctor Who reckons the secret to the universe is capitalism.

So basically Doctor Who reckons the secret to the universe is capitalism.

The majority of people in the West have had no rise in incomes for the past thirty odd years. Up to a certain point capitalism raises living standards. And then it seems to stop for all but a small minority at the top of the heap.

One might also wonder whether rising incomes are really a good measure of living standards. (This would take an essay to address.)

But actually I don't think Phil does mean rising living standards. I think he means something like the wider distribution of the power for each person to determine their own life and desires. That is, if I have lots of money but somebody else can constrain what I spend it on or what I do with it, that doesn't count as material social progress.

Material Social Progress means that peoples lives are improving demonstrably. It doesn't mean capitalism. It involves things like education, social equality and (yes) living standards. Capitalism can be a means of MSP however it is by no means an endpoint or synonym. Capitalism is a system of gross inequity and causes a growing gap living standards internationally.

Having just googled, yes, it is. Just paras 10 and 11, but definitely from that article. I note that Sims, like me and Alan, thinks the supernatural shouldn't exist in Scooby-Doo, and makes much of Velma as the rationalist who looks for the logical explanation.

(I wonder what Sims made of subsequent episodes of Mystery Incorporated. You know, the ones where the whole town was built around a :Lovecraftian horror that was guarded by Conquistador ghosts.)

The following image seems relevant to this discussion: http://twitter.com/notjessewalker/status/439026530719522817

Its suggestion that children who tell their parents about things they don’t understand deserve to be dismissed as silly --well, yes, that was Toby's experience, but surely the entirely show and the very nature of Sarah Jane is to present the opposite view--that some adults will understand.

"Reverse the polarity" was generic technobabble admittedly drafted for an actor who refused to learn lots of technobabble that might have made better sense. The implication was still that there was technology involved, albeit over our heads, and doing this "reverse the polarity' thingy would cause that technology to work differently than it had been. Compare that to, say, The Big Bang, where Eleven just jams the screwdriver into the back of a two-foot-wide satellite dish to improve reception and, voila, he can hear River talking from untold millions of miles away.

In Doctor Who terms there's no material difference between the comparison you've suggested. Techobabble is just fake science designed to allow the show to tell the stories it wants to. So is the sonic screwdriver.

Personally, I don't care if the Tardis equivalent of dilithium crystals is plausible SF technology. In a lot of Doctor Who, technobabble is only there to justify the magical elements of the show to the parts of the audience that prefer sciencey explanations.

The only difference between the old show and the new show is that the new show replaces 'reverse the polarity' dialogue with 'point the sonic screwdriver' action, but the end result is the same.

I've been watching Image of the Fendahl tonight, which contains zero 'proper' science but lots of wonderfully daft occultiness dressed up as technobabble. The Smith / Moffat era fits well into that kind of tradition.