“...rose from a solid sea”: Timescape 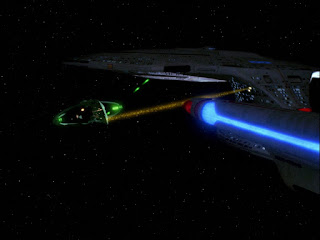 A river, flowing to eternity. Frozen.

But even when frozen, water does not stand still. There is movement and kinetic energy at the molecular level, imperceptible though it might be to normal human senses. Water's mercurial nature is in its ability to remain fluid throughout many different forms.

In the depths of space, due to the extreme temperatures, water does not solidify into the crystalline lattice commonly associated with ice, but ice still exists. It is still freezing. In space, ice forms as an amorphous solid, transitioning in an instant to a kind of cosmic glass. Amorphous ice is likely the most common form of water in the universe.

On Earth, a lake frozen over in winter appears still and silent as the world around it appears locked in suspended animation. But beneath the surface, life goes on: Some fish, such as trout, are actually *more* active during the winter, while many species of insect spend their larval stages underwater during the winter in temperatures that can average a balmy 1-4 degrees Celsius in places. Winter is not a finite cessation of life, but a part of the continuing cycle of life.

There are events still in motion even as the world seems to sleep, setting the stage for the inevitable spring. And so the cycle begins again.

There are few stories that have become so much a part of my being and existence as “Timescape”. Rewatching it the other night reminded me why. There are some episodes of Star Trek: The Next Generation that instantly come to mind when I think of the series-I've already mentioned “The Chase” is one this season. “Timescape” is not one of those episodes. It's in a category beyond that, existing only as a vivid sensory memory. When I think of Star Trek: The Next Generation, I don't think of this *story*, I think of its *images*: The Enterprise locked in combat with a Romulan Warbird. The eerily silent dreamlike atmosphere of the ship itself as she and her crew remain suspended in the unfolding moment. Deanna Troi making her way through a frozen sickbay, visibly astonished at the sight of Doctor Crusher in the midst of being crippled by a disruptor blast. Those images have lingered in the back of my psyche as clear as they were on first transmission for over twenty years.

Not so much Captain Picard playing with the warp core breach in engineering, though it's every bit as evocative and fitting. It certainly plays well for Tumblr, though.

I sometimes forget who else is stuck with Deanna outside in normal space-time. Not because Captain Picard, Data or (Prophets forbid) Geordi are low-key or forgettable presences, but because Deanna is the person I seem to have fixated on the most in these sets of images. Perhaps I've subconsciously connected “Timescape” with forthcoming episodes like “Dark Page” and “Eye of the Beholder” that share the same space in my memory, are equally dreamlike and in which Deanna also plays an important role. These are all experiences that, for me, transcend television and narrative itself to attain a nirvana of pure aesthetics. Star Trek: The Next Generation in its highest, most profound and purest form. The state in which I know it the most intimately and constantly strive to maintain; its realest. That is, ultimately, why Vaka Rangi exists.

And maybe here, and in Deanna, I also see a kind of ghost-echo of the Alice in Wonderland oeuvre, which is and always has been my favourite story. A young woman patiently and methodically explores a hauntingly surreal dream world with just a twinge of darkness and malaise about it. And I would assume that if anyone on Star Trek: The Next Generation were to step into that role, it would almost have to be Deanna: “Timescape” shows her at her most investigative and competent to date, the science officer she always should have been. Normally we'd expect this role to go to Beverly, but Beverly isn't with us this week and Deanna *is* in the sciences division: These are skills we always should have expected she had. There's a boldness and inquisitiveness to her here that also reminds me of Alice, and as an empath with extensive expertise in psychology, perhaps it only makes sense for Deanna to be the one to plumb the recess of the mind. 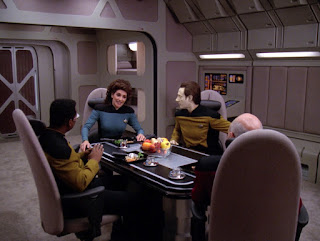 There's the Runabout. The starship's only appearance in Star Trek: The Next Generation, and also the only appearance of the living quarters section of the ship. The set was actually built by the Next Generation team on their budget for Star Trek: Deep Space Nine, which was going to need it but couldn't afford it this season. The irony being that this was the only time the set was ever actually used. But it's natural to see a Star Trek: Deep Space Nine invocation in this of all episodes, and appropriate in a bittersweet way that it's a glimpse into a future for Star Trek: Deep Space Nine that was fated to never come to pass in this reality. It, like the temporal anomalies, is a window into an alternate temporal dimension outside our current space-time continuum. But we can see it. And we're reaching for it. Like Alice, all we need to do is cross the gateway into the world that exists within and beyond the barrows.

I once had a model kit of a Runabout. Specifically, the USS Rio Grande, the celebrated hero of Star Trek: Deep Space Nine's Runabout fleet. I always felt it was so decorated because that was the ship that Ben Sisko and Jadzia Dax travelled in to rediscover the Celestial Temple, but that's another story. My father built it for me because I had no patience for model kits (I still don't). I think it was one of the very first pieces of merchandise produced for Deep Space Nine, so I must have gotten it 'round about this time. I remember looking through the vertical windows at the stern and imagining what the interior looked like in that part of the ship. I'm astonished that somehow the art department built it to look precisely as I imagined for “Timescape”. Or maybe I'd already seen “Timescape” and had a lingering memory.

There's a specific shot I remember from Star Trek: The Next Generation. I think it must have been from this period. The crew remotely explode a shuttlecraft off what I'm thinking had to be the starboard nacelle. I'm upset, because to my knowledge the only shuttlecraft is the Goddard, which my toy represents (because no other support craft was featured in promotional materials at the time) and I don't want my ship to be destroyed. My dad had to explain to me that the Enterprise has more than one shuttlecraft, and they can easily build another. Now I'm wondering if the scene I'm actually remembering is Captain Picard remotely steering the Runabout into the energy transfer beam in this episode, and I've misremembered a Runabout as a shuttlecraft all these years. I may yet never know.

Once more, aliens from outside are trying to reshape the time-space continuum for their own ends. A form of self-preservation, as they've accidentally nested inside the Romulans' engine core. The Romulans use an artificial singularity to warp time and space to move forward. Some physicists speculate that black holes could empty out into other universes, but a black hole isn't the only thing that can have a singularity. So, of course, can a wormhole. Two realities are jeopardizing their mutual existence by being in contact with one another: The world of Star Trek: The Next Generation/Star Trek: Deep Space Nine and Another. Something that's come here from somewhere else. With our mutual continued becomings in the balance, the only options are to reformat the universe or split it in two.

There are many details about “Timescape” I do not remember. I do not remember that The Freezing was brought upon by aliens from beyond time. I do not remember why the Enterprise and the Romulan Warbird are locked in combat, but I have a faint recollection it's not because of a trap or an unprovoked Romulan attack. Something unseen, intangible and unknowable has manipulated events to be this way, as if posing the two ships mid-battle in a kind of cosmic diorama. I also do not remember what a good Romulan episode this is, the next step in their redemption following “Face of the Enemy” and “The Chase”. Indeed, its Deanna's experiences in “Face of the Enemy” that help the crew piece together the clues to the mystery. The Romulans are exquisite red herrings that play extradiegetically on their fall and rise over the course of the series: The crew, and us because we share their perspective, immediately (and wrongly) assume the catastrophe is somehow a result of a Romulan attack. But it's then revealed that the Enterprise and the Warbird both knew about the aliens and the two teams were willingly and happily helping each other when disaster struck. We get a happy ending, and utopia prevails.

The thaw is inevitably coming, and the brighter days that accompany it, because here at the point of singularity we can see all points in time are present. The cycle constantly repeats and reinvents itself always in every waking moment.
Share on Twitter Share on Facebook

When I was young, I didn't fully appreciate just how badly served Marina Sirtis was by the showmakers, but I do recall being actively aware in this episode, especially in the scene where she interposes herself between Beverly and the Romulan, that they were treating the character of Deanna like a grown-up here, and this was a big change for the better.

Waaaaay too late to matter, but Sirtis is by miles the biggest waste of the main cast in TNG. She becomes a genuinely compelling character, which is no mean feat, and gets my MPV award for the TNG movies (not a high bar to clear, admittedly) despite getting about five minutes of screen-time per movie. Once she finds her feet (which, to be fair, took some time) and the show learned how to use her, she's really quite, quite wonderful, and Timescape is a great example of how to really engage with her character and usefully deploy her to do things that other members of the cast can't (I don't think this episode would work nearly as well if it had been Crusher instead of Troi).

I too have very vivid memories of the images from this story. I had completely forgotten that the incident here was down to an incursion from an alien race - lovely evocation by you of otherworldly beings stepping over the threshold from the mounds and barrows.

And I really love the imagery around Winter and ice that you used, lovely writing.