“Time, professor.”: A Matter of Time 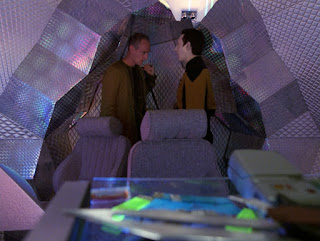 There's an episode of Star Trek: The Next Generation that has always been imprinted on me. In my mind, I see an image of Data and somebody else slowly moving about inside what appears to be some kind of alien spacecraft. The walls are all odd, geometric shapes coloured silver blue. There's a cool, yet dark, lighting to the scene. I think the episode is “A Matter of Time”, but I can't know for sure.

So now you've heard their story. It's time to tell the other side.

“A Matter of Time” is another of Rick Berman's rare solo contributions, and marks his first stab at a topic that seems to fascinate him and inspire a lot of his future creative work on Start Trek: The ramifications of time travel. In particular, what kinds of social norms and mores would crop up in a universe where time travel technology is commonplace. As it pertains to this story, Berman cites the “Mark Twain” feeling” of “what Leonardo da Vinci could have done with a calculator or Alexander the Great with a shotgun”. But while Professor Berlinghoff Rasmussen may not technically be a historian, this doesn't mean he's just a simple con-man with a time machine either.

Yeah, Rasmussen was one of ours. Bad seed; went rogue. More or less harmless in the scheme of things, mostly because he was also terrible at his job. We found the time pod adrift in space, probably crippled during one of their skirmishes. We brought it to him for analysis and to keep it safe, hopefully so we could finally get some answers about this damn war. The agents found out, of course. They came to us and told us we had to return it because it would endanger the future-Their future, naturally. Our thinking was that they'd spent so much time meddling in our present, it'd only be fair if we poked around in theirs for a bit to see for ourselves what all this was about. Of course, Rasmussen thought it would be an easy way to make some extra coin.

The thing that struck me the most about “A Matter of Time” is how aware of its own structure it is. For 97% of its running time, it's very straightforwardly one kind of story: Rasmussen's presence prompts the Enterprise crew to realise that Penthara IV is not going to be a run-of-the-mill mission; that something genuinely historic is going to happen. And the knowledge that it will, and they aren't allowed to know anything more about it than that, forces the crew (most notably Captain Picard, but Commander Riker, Geordi, Doctor Crusher and Deanna as well) to consciously think about their own decision making processes and ethical standpoints. It's not shoehorning conflict into Star Trek: The Next Generation for the sake of conflict, it's another manifestation of what travelling on the Enterprise means: That you get to know yourself better and grow as a person because of that. And that act in Captain Picard's ready room between him and Rasmussen has got to be one of the all-time greatest exchanges in the series, even if it hinges on patently nonsensical temporal mechanics technobabble. And it all culminates in that wonderfully glib, but true, line from Rasmussen: “Everyone dies, Captain! It's just a question of when!”.

Where I come from, there's a great war being fought for control over the time-space continuum. Throughout history wars have always been waged for ideological reasons, but try to imagine what forms those ideologies take when the battlefield is history itself. With time travel technology, we now have the capabilities to reshape time to suit our tastes. Every textbook and every story is real, and also a possible weapon. Did you hear what Rasmussen said about his “areas of interest”? Those dates were not picked at random to pad out his cover story. There's a critical battle going on in the 26th century, and depending on which side ends up on top the tide of the war could be permanently shifted. But they've made it so their battles are not contained to their times anymore: They imposed themselves into our existence and made their war ours. And regrettably, our war is now about to become yours as well. Perhaps it already has-I...I can't know for sure anymore.

Of course this thread gets seemingly subverted and abandoned in the final moments when it's revealed Rasmussen is actually a con man. It could be argued that, as was the case with Q in “Hide and Q”, doing this robs Rasmussen of a unique perspective from which to critique the Enterprise crew, but I actually don't think this hurts the story that much, if at all. Though I think “A Matter of Time” would have worked just as well as it does now had Rasmussen not been a con (and in case I've not been clear it works really, really well: This is one of my favourite episodes), the fact that he is adds one more wrinkle to an already intriguing story. Because in essence this means Rasmussen is undercover, in other words, he's playing a role. Remember how one of the strengths Star Trek: The Next Generation has built for itself out of its numerous production adversities is a multilayered knowing performativity where characters take on roles that may not be technically theirs, but that need to be filled. In essence, they double up and play understudy as a coping mechanism to deal with critical pieces of their performance getting crippled from the outset.

Rasmussen knew about it. About them. We all did. Don't underestimate the ingenuity of our engineers. He picked his marks smartly and meaningfully-That was probably his best attribute. He met with them because he had seen what they were going to become in one possible destiny. I think somebody from your time once said something like “every ship to bear the name Enterprise has made history” or something to that effect? If only he could know just how right he really was. Understand, while Rasmussen might have been shortsighted and let his personal flaws get the better of him in the end, he was a good man. I knew him, and can tell you he was profoundly changed by his experiences. Maybe not enough, but he played his part with aplomb when he was called on to do it. We can only hope we'll be able to do the same when our time finally comes for us.

What Rasmussen does here is play the role of interlocutor to Captain Picard perfectly. He might not be exactly what he seems, but neither is this story. And neither are the Enterprise crew, for that matter. A compelling argument could be made that they're gaming the Federation and the structure of Star Trek in much the same way Rasmussen games them here: They're Starfleet's flagship but interact with their superiors with what can best be described as malicious compliance: They embody the ideals the Federation claims to stand for, but in doing so they reveal that the Federation in truth doesn't stand for them at all. And that's a massive embarrassment to Earth that makes them look terrible, and rightly so. If Rasmussen makes a mistake it's that he betrays the Enterprise crew's trust (an egregious error as Shocking Betrayal!-style conflict is a tentpole of the kind of hack writing Star Trek: The Next Generation must purge itself of). Or maybe it's that he got overconfident and blew his cover: As Captain Picard says at the end, they never would have suspected him had he stolen less shit. In the end, Rasmussen's only crime is that he's not as good a con artist and performer as he needed to be.

(It helps of course that Rasmussen has such a fantastically talented actor to bring him to life: Matt Frewer, of Max Headroom fame. Apparently he was written with Star Trek fan Robin Williams in mind, but he was too busy filming Hook at the time, necessitating a recast. Frewer's great in the part though, bringing a perfectly balanced sense of tone and mania to the performance that's neither overly broad or overly similar to his equally quirky (though for different reasons) iconic character. And somehow it feels fitting that he's playing a renegade fighting against the forces of teleology.)

I suppose I'm opening myself and my people up to criticisms of arrogance. You could ask “how could you be so presumptuous as to want to reshape reality?". Well, that's a criticism you could level at every single one of our rivals and our enemies. And to yourself, actually: You may or may not have consciously come to terms with this yet, but reality is nothing except what you believe it to be. That old phrase “perception is reality”? Another quote that's more true than people realize. We all exist within our own realities unknowable to anyone except ourselves. And time? Time can only be known through history, and history is a story we tell each other. And stories are real. You've already heard someone else's story, and now this is ours. We will be heard at last.

I'm surprised about the Robin Williams angle. I could have sworn there was conventional wisdom back in the '90s that Williams disapproved of Trek because he read the Federation as a military dictatorship.

But then, an awful lot of the wisdom convention bestowed on me later turned out to be lies.

I always remembered my mother pointing out that she'd seen Max Frewer somewhere, possibly on "Days of Our Lives" at some point. I never confirmed it via the internet, and don't plan to, but it sticks with you.

There's something about this one. A level of artifice and playfulness - it's almost a better version of Outrageous Okona. For a long time, because of the terrible need for recurring thematics in titling, I confused this one with A Matter of Perspective and skipped it a lot, so I haven't given it the full critical treatment.

But I like time travel, and I like time travel in Star Trek, and I really generally like when something Doctor Who-ish inserts itself into Star Trek's "straightforward" space imperialism narrative and makes everyone start asking questions about everything.

It's very weird to me now to remember how when I saw Matt Frewer in this, him being Max Headroom seemed like incredibly ancient history from the Before Time, given that it was only about three years.

Yeah it's funny how time can distort with memory - as I find I feel the same, as Max Headroom seemed like it had happened so long ago! And in some way that show still seems to hold such a nostalgic weight in me.

Love this episode and love Matt Frewer. I saw this by chance in my local pub recently (a lovely little living room of a bar populated by three crazy collie dogs and run by the Doctor Who gan Hector) and it was such a lovely surprise to see it playing on the big screen TV - "I remember this!", I went to my partner, and how good it was to be reminded of it and to read about it now. Love your time pieces Josh.