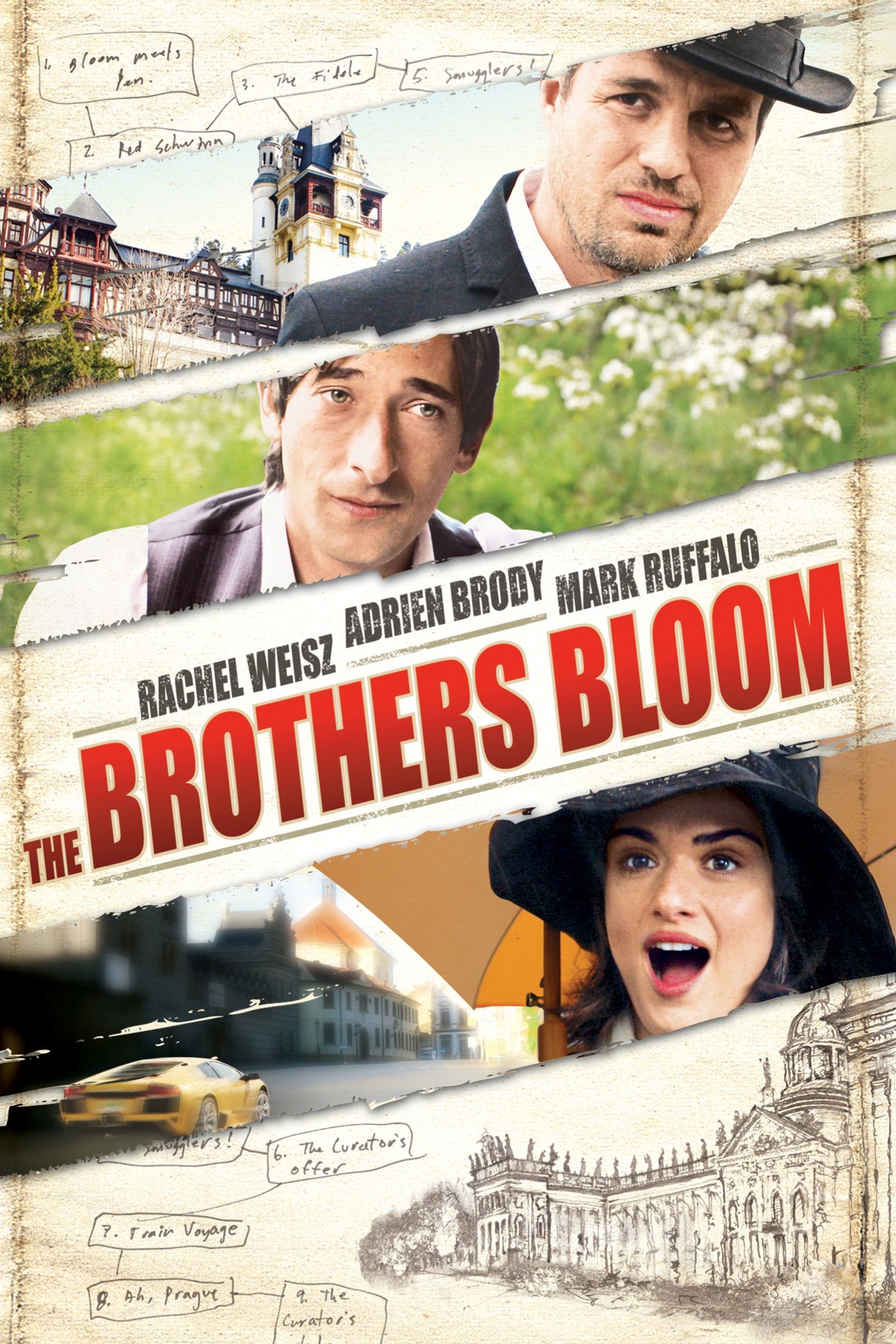 At first glance, there are relatively few similarities between Brick and The Brothers Bloom. Brick is a self-consciously dour noir film about ruined masculinity. The Brothers Bloom is an ostentatiously colorful heist film about the power of stories. There seems very little that one can conclude about things like Rian Johnson’s style based on them. This is, of course, pretty much all a director can hope for after their second film. Make two similar films or, worse, more or less the same film twice and you’re pigeonholed. Make a surprisingly dark high school noir and then turn around and make a quasi-Wes Anderson heist film, on the other hand, and you’re well on your way towards seriousness.

Brick was a good film. The Brothers Bloom, on the other hand, is a great one – one I instantly fell in love with when it finally came through Gainesville on its meandering limited release tour. Looking back at it, I realize it must have been a small and quiet influence on TARDIS Eruditorum, with “there’s no such thing as an unwritten life, only a badly written one” getting to the point a solid year before “we’re all stories in the end; just make it a good one.” And it is with this closing moral that the connections with Brick also become clear. Brick, after all, is also about storytelling – a fact most explicit in its closing scene, where Brendan’s revelation that Laura was behind Emily’s downfall is framed explicitly as a story, with Brendan’s accusation called a “tale.”

But in Brick this was more or less a silent thematic element. It’s present in the mix, and entirely sensible – a detective’s job is, in many ways, to uncover the story of events. But it’s fundamentally subdued. But, unsurprisingly given that the heist film is already an inverse of the detective film, The Brothers Bloom takes the latent metaphor and expands it wildly. Stephen’s cons are written “the way dead Russians write novels, with thematic arcs and embedded symbolism and shit.” His explicit goal and vision of the perfect con is to “tell a story so well it becomes real.” This is entirely straightforward and true: a con is a story, and all stories are cons.

Obviously this gets very meta very quickly. The Brothers Bloom demands that we understand it as a con, and Johnson as a con man. But this is not in and of itself significant without some understanding of what a con is meant to be. Once again the film is happy to go for text instead of subtext as Stephen says that “the perfect con is where each one involved gets just the thing they wanted,” a line that’s repeated over the ending because this is not a film that’s shy about making its aesthetic points. So obviously Stephen’s central con around which the plot revolves is judged a success. Stephen gets to die on a job (Bloom had earlier suggested he’d like just this), and Bloom and Penelope get each other.

Ah, yes. Penelope. More even than the fact that The Brothers Bloom is very funny, it is Penelope that makes the film significantly different from Johnson’s other two. While the film doesn’t technically pass the Bechdel test due to the fact that the other primary female character is a non-speaking character called Bang Bang (a decision that’s more than a bit cringeworthy, though not as bad as the joke whose punchline is “Mexico is a horrible place”), there are at least scenes in which Penelope and Bang Bang are discussing things like pinhole cameras and explosives, and it’s explicitly remarked that Penelope is the only other character Bang Bang gives her phone number to.

Bechdel compliant or not (and we all know how easy it is to overemphasize the Bechdel Test), however, the basic fact remains that The Brothers Bloom is a film driven by its female characters in a way that Johnson’s other films simply aren’t. (Indeed, he’d originally wanted to call it Penelope, but was beaten to the punch by Mark Palansky’s “Christina Ricci has pig ears and a pig nose” comedy.) Yes, Penelope is more or less a straight-up manic pixie dream girl, played by Rachel Weisz, who actually isn’t serially cast in that role but seems instinctively like it should be. But she’s given actual agency and interiority, and a clear position in the film’s thematic debates that is allowed to pay off. There’s a low bar to clear here, yes, and the fact that Johnson’s track record with female characters is so disappointing is a bit worrisome headed into a film with a female lead, but it’s still reassuring that when he has gone in this direction it’s worked.

What’s key about Penelope is both that she provides a clear resolution to the central debate between Bloom and Stephen and that she is positioned outside of it. Bloom wants “an unwritten life.” Stephen wants to write every aspect of life. Penelope, meanwhile, repeatedly declares that she’s “not a planner” while simultaneously repeatedly making declarations about the sort of story she’s in. During her lengthy monologue explaining her history, she explains how she “decided this wasn’t a story about a miserable girl trapped in a house that smelled like medical supplies wasting her life on a dying person she sometimes hated. It was about a girl who could find infinite beauty in anything.” (Ignore the painfully textbook MPDG sentiment about finding infinite beauty in anything -it’s more or less just a starting position before she moves on to more interesting stories like “being a con artist” anyway.) These twin positions – claiming authorship while rejecting the larger notion of planning – offer an alternative for Bloom besides drinking aimlessly in Montenegro or playing roles in his brother’s cons.

But more important is the fact that Penelope cottons onto this, or at least the broad strokes of it, fairly quickly. She instinctively gets the fact that the Brothers are mostly bullshit, and spends large swaths of the film dancing transgressively atop their con. The most obvious example to point to is the lengthy sequence in which they actually steal the prayerbook, a heist that goes awry when two bags of explosives get switched so that what is supposed to be a small charge that sets off a fire alarm instead demolishes an entire belltower. Despite being caught crawling through the ductwork with the stolen prayerbook in hand, Penelope somehow talks her way out of the situation, a feat Johnson has happen off screen, suggesting that Penelope’s skills, like Bang Bang’s full life, are simply beyond the capabilities of a film about boys to depict. But it is in many ways the smaller things – her off-handed observation of Stephen’s excessive thematic in-jokes, her successfully rumbling the final step of their con, her casually blowing up her entire life, or her delightful “grumpy petrified poop” speech – that really establish the charm of her performance.

This gets at a key thing about the film’s success. As is no doubt clear by this point, it is not a film that is particularly invested in subtlety with regards to its themes. This is in no way a problem; subtlety is an overrated virtue. The fact that the thematic elements fit together so cleanly is part of what makes the film work. But it does mean that, other than the basic aesthetic sympathy one has for a moral of “live like you’re in a story; a fucking awesome story,” it means that the thematic elements can’t hit the level of genius. For that the film will have to get by on what all cons get by on: sheer charismatic style.

Thankfully, Johnson rises to the occasion. The script is outrageously quotable (“that’s my new favorite camel” is one of my all-time favorite lines in anything), but even more notable for the number of good lines it deploys casually, such as Bloom’s mid-tirade assessment of Bang Bang’s choice of cars as “controversial.” But it also deploys the handful of set pieces that Johnson’s first foray into having a budget allows. The slow motion shot of Bloom’s bike crashing into Penelope’s car, the running joke of Penelope crashing her cars, Rachel Weisz’s single take card trick, and the aforementioned book heist all look absolutely great. Really the whole film does – Johnson used international coproduction money savvily to get a bunch of breathtaking eastern European locations, and retains his eye for an interesting shot or composition. Sequences like the Curator greeting Penelope as the lights go dim or the final confrontation in a decaying theater just plain look astonishing. And like Brick, it’s exquisitely cast, not only in the three leads (Weisz is joined by Mark Ruffalo and Adrian Brody) but in the smaller characters like Robbie Coltrane’s Curator and Maximilian Schell in his final role as the menacing Diamond Dog. It’s a film that’s brilliant often enough to reward multiple viewings; I’ve probably seen it a half dozen times now, and still found new things to be charmed by watching it for this.

The density of its quality, however, highlights a complexity we’ve thus far danced around. The perfect con, as declared, is one where everyone gets what they want. But we’ve only addressed that in terms of Stephen’s con, as opposed to Johnson’s. The audience’s end of this is mostly simple – as I said, the film’s delightful. But what does Johnson want? For all that the film offers Penelope as a superior option to Stephen, it’s clear that Johnson, in crafting a film with a surplus of cleverness and thematic resonance, is fundamentally more sympathetic to Stephen. (Indeed, one really need only look at the fact that the film’s focus is on the Brothers.) And while one can construct a metaphor that equates a story becoming real with the satisfaction of turning an idea into a finished film, it’s ultimately hard to argue that The Brothers Bloom constitutes the sort of personal apotheosis that Stephen seems to seek. It’s a very good film, not a magical ritual to transform Rian Johnson into a being of pure narrative.

But then, Stephen is a con man on his last job. Johnson’s a filmmaker clawing his way from indie microbudgets to being a serious director who can get his most ambitious ideas produced. This was never the film where he was going to get everything he wants, and that is in many ways the source of its heady charm. Brick established his competence, but The Brothers Bloom is the film where he demonstrates that he matches that competence with the mad ambition that characterizes great filmmakers. One good con does not a great con man make. Nor does one great con.