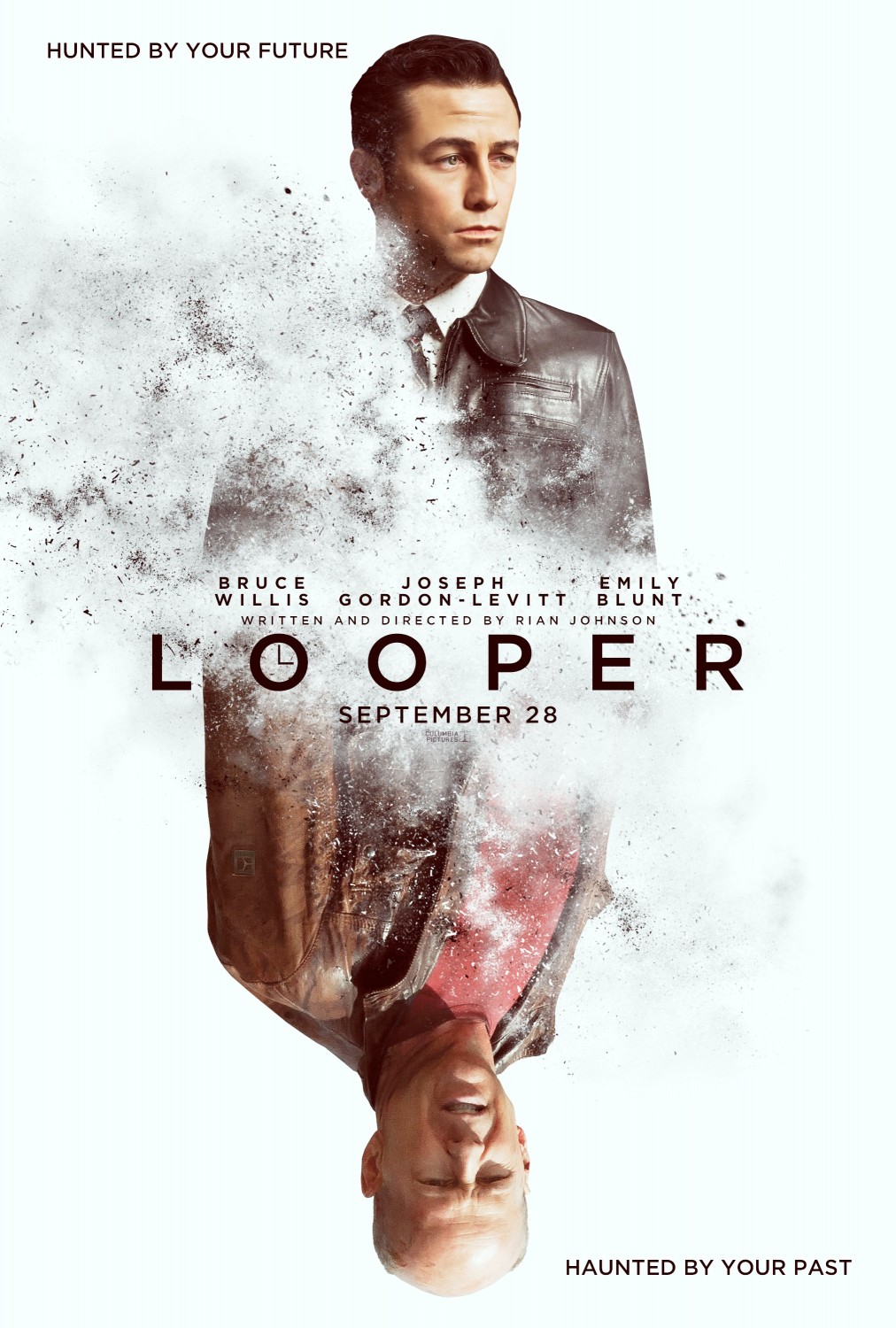 Looper is a flawed film in ways that neither Brick nor The Brothers Bloom were. This is not to say that it’s a bad film; it’s not at all. But after two films that were notable in part for their impressively taut discipline the fundamental sloppiness of Looper stands out. There’s not a lot that follows from this – everybody who’s made more than one film has a worst film, after all, and most directors have one that’s far worse than this. There’s still a number of things it does well, and well in ways that confirm where Johnson’s talents lie. There’s just also whacking big problems, most of which have a reasonably obvious source.

The biggest and most fundamental problem is that the join between two halves of a script completed at very different times. The first hour – basically everything up through the diner scene – was written in 2008 during the shooting of The Brothers Bloom. The second half, starting with Sara’s introduction, came in 2009. And it shows. The first half is a well constructed film about a man in gripping contact with his older self. The second half, on the other hand, is a well constructed film about a creepy psychic kid. Both are good, but on a very basic level they’re not the same film, and the second half feels as though Johnson realized he didn’t have quite enough ideas to get over the finish line and so arbitrarily decided to raid Akira.

That Johnson should have this problem is admittedly a bit strange. Cid (the psychic kid) is little more than a MacGuffin – the thing over which the two iterations of Joe, the main character, must fight. It doesn’t seem like it should have been that difficult to find one that extended out of the existing time travel concept instead of adding a whole second set of big sci-fi ideas. Instead, the premise around Old Joe seems to abruptly shift as he’s suddenly revealed to have been planning a campaign against futuristic crime boss “the Rainmaker” since before he was sent back in time, a plot point that doesn’t really fit with how his being sent back in time is initially shown. More frustrating is the fact that Sara, the female lead, who ends up being the viewpoint character for the final scene, doesn’t show up until the halfway mark. It’s not that any of this is easy to fix per se, but it’s at least pretty straightforward what you need to do.

But it’s still a problem that only really means that the film never quite manages to hit a point where everything clicks and it starts really getting impressive. Instead, Looper simmers along on the brink of greatness without ever crossing the line. But in many regards it’s less productive to look at what holds it back than what almost gets it there. First and foremost is the most elegant premise of Johnson’s career to date. The basic jist of Looper is that there are hiit men who kill people sent back in time from the future. Their last job is always to kill their own future selves. And Joseph Gordon-Levitt botches his, letting his future self, played by Bruce Willis, get away. Johnson has always been good at casting, but Bruce Willis as an older Joseph Gordon-Levitt is an idea that’s at once bewildering and perfect. (I think my favorite part is that they put Gordon-Levitt in a prosthesis to make his face resemble Willis’s more while simply not bothering with the fact that the actors have markedly different skin tones.)

More broadly, Johnson has the good sense to have his time travel story not be about time travel, to the point of having an ostentatiously meta exchange in which Bruce Willis declares, “ I don’t want to talk about time travel shit, because we’ll start talking about it and then we’ll be here all day making diagrams with straws. It doesn’t matter.” Looper is spectacularly unconcerned with the business of its time travel. Indeed, it’s sufficiently flagrant about this that it has become a standard line of critique against the film, with its most self-evidently genius sequence, in which a character reacts with growing horror as parts of his body simply disappear and become old scars due to his younger self being tortured. This, apparently, “doesn’t make sense,” a complaint that is curiously never leveled against the time travel in, say, Blink because Blink hues to the familiar time travel mould of a writer peacocking about how clever they are whereas Looper is only interested in time travel because it’s a means of literalizing a the idea of a young guy being horrified at his older self (and vice versa). This is, on the whole, refreshing; time travel stories too often get bound up in their own rules such that they end up not being a metaphor for anything other than themselves. Stories focused on the ethics of changing history are a particular offender, but the point really applies broadly: time travel often fails to actually be a metaphor for anything. Johnson handles this with admirable efficiency.

Also well done is the film’s other conceit, the creepy psychic child. And this is genuinely impressive. For all Johnson’s skill at casting (and since I’ve praised it in three posts I should probably note casting director Shannon Makhanian, who worked on both Brick and Brothers Bloom, and the four-person team of Craig Fincannon, Lisa Mae Fincannon, Lindsay Graham, and Mary Vernieu who did Looper), child actors are infamously tricky, and Cid, who has to be unsettlingly dangerous and sympathetic at the same time, is harder than most. Pierce Gagnon, however, is superlative in ways that make it utterly unsurprising he eventually made his way to Twin Peaks. He ends up perfectly pitched, with Cid initially coming off as slightly unlikable in a difficult to place way, such that the eventual revelation that he has terrifying psychic powers feels clarifying. He manages, particularly in his interactions with Gordon-Levitt’s version of Joe, to come off as sympathetic while also always being someone you can believe grows up to be a murderous crime lord. And, unsurprisingly, the actual scenes of his psychic outbursts are exquisitely shot, with a tremendously effective polarization effect on the lighting that gives them the feel of a storm on the brink of hitting without being over the top.

And, of course, Johnson nails the basics. His futuristic world is well-sketched, and in a clever way that consists more of details than big picture stuff. A flying motorcycle here, a futuristic drug administered via eye-droppers there, and pretty soon you have a world that feels real without any significant effort being spent on its coherence and design. No small part of this is the deftness with which Johnson deploys iconography of other movies – the setting has recgonizably intact bits of Blade Runner and Twelve Monkeys that are large enough to immediately feel familiar and real, but not so large as to drown out what Looper is doing. Perhaps most relevantly for his future projects, this is a world that feels lived-in – a “used” future, to nick a specific phrase.

This look towards future projects also brings us to its role in Johnson’s overall career. The progression from Brick to Brothers Bloom was pretty straightforward – a textbook microbudget debut followed by a film that was progress in essentially every regard. Looper, on the other hand, is Johnson’s weakest film. This is not a particularly worrisome sign – essentially nobody has a constantly upward trajectory in their career. But what’s important here isn’t so much its contribution to Johnson’s growth as an artist as its contribution to Johnson’s growth as a force in the film industry. Brick and The Brothers Bloom played the indie circuit, mostly screening in small arthouse theaters. They did well in that market, and there’s plenty of routes from directing those to directing big budget films – fellow Disney studio Marvel is fond of tapping indie directors (along with television directors, although it’s probably worth noting that Johnson directed several episodes of Breaking Bad, including its widely acclaimed bottle episode “Fly) for its tentpoles. But Lucasfilm has generally not been inclined to go that way, tapping experienced megafranchise guys for Episodes VII and IX.

Obviously the pick of Johnson – notable as the only person other than George Lucas to take a sole writer/director credit on a Star Wars film – was in part a conscious decision to make the middle film of the trilogy the riskier and more ambitious one. He’s not accidentally the only sequel trilogy director to have a “serious filmmaker” reputation, although he probably is accidentally the only one to look to The Fountain and Tideland as models of filmmaking. But Looper is very much the film that takes him to “the odd one out on that list” as opposed to “guy who it’s flatly inconceivable would ever be touching a Star Wars film.”

It’s not that it’s a massively big budget film than The Brothers Bloom – at $30m, it was only $10m more expensive. But it was a film that opened wide and in multiplexes. It was also geared specifically for the international market. Like The Brothers Bloom, it was a coproduction, but this time with China, which got an extended version with added Shanghai scenes. It opened with a $20m weekend in the US, coming in second to Hotel Transylvania, to which it was essentially an alternative as opposed to a competitor. But its real accomplishment was pulling $24m in China on the same weekend, the first time an American film has earned more there than in its domestic run. It was, in other words, a solid minor hit, and notably an action-heavy sci-fi one to boot. Even if it was a step backwards artistically (and I suspect “minor misfire” is the more reasonable framing than “step backwards”), it was the film that opened the door for Johnson to direct a franchise blockbuster that’s basically guaranteed to open around $200m+. I’ve no idea what Johnson plans to do after The Last Jedi, but the basic shape of the answer is going to be “whatever the fuck he wants.” And Looper is what punched his ticket.

Which brings us to the end of this little overview of Rian Johnson’s career – a primer on the rise of someone who’s already made one of my favorite films, and who I have absolutely zero doubt will make another at some point in his career. Hell, he may even manage to make a Star Wars movie that I like.

But that’s another trilogy.