All Of The Weapons You Need (Street Fighter II Turbo) 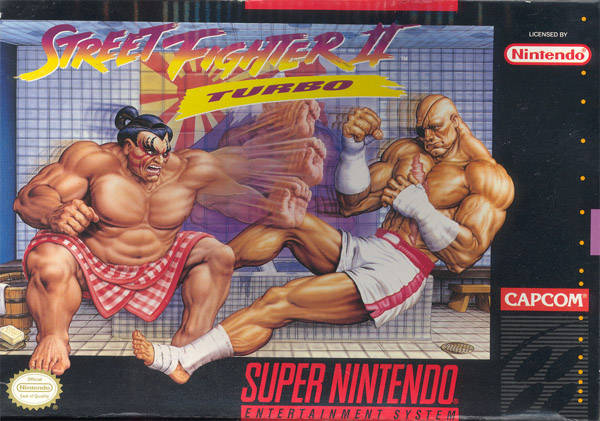 We all have in our heads the idea of an art of fighting. Not necessarily any interpretation of that art, but the fundamental concept of its existence. That fighting should be an artform seems self-evident. No shortage of cultural work must go into an instinctive equation like that. And examples abound: all discussion of boxing as dancing (and indeed the way both boxing and fencing are largely matters of footwork); indeed, the existence of ritualized fighting sports, which tie it inexorably to the notion of play. This can even be pinned to E.V.O.-level concerns if we want; one need only watch the play of our domestic pets to see that the act of combat is our oldest game. (Literally true; c.v. Spacewar) And with games come strategy and skill, and with those art. That this particular art is also how we topple empires is beside the point.

The fighting game is a distillation of this, and in some ways the best example of the idea of playing with and within a system. Done well, and Street Fighter II Turbo is done very well, it is a genre that works in the chaos engendered by the rules. Each character has a finite moveset – in Street Fighter II (you’ll forgive me if I just start calling the game this) a light, medium, and heavy version of punch and kick, with variations depending on whether you’re crouching or jumping. There’s a rudimentary block, some grabs/throws, and some special moves for each character, but that’s it; a simple framework for movement.

And then there is the game – the actual act of throwing down and fighting. And suddenly a wealth of variations emerge. Even if you ignore special moves – and let’s face it, a sizeable number of people to play this game, especially in the arcade, had no earthly idea how to perform any of them – the differing speed, power, and reach of characters and moves quickly impose fighting styles, which then vary again based on your opponent. Add the special moves that, for instance, give Ken and Ryu viciously good defense against aerial attacks (while also being able to punish players who try to maintain wary distance) or make it near-suicide to get caught unaware in close range with Chun Li or E. Honda and you have a game of astonishing depth.

And my does it have depth. It’s simplistic compared to modern fighting games where the fine-tuning that goes on for elite players and edge cases is so intense as to be nearly incoherent to most players. But I remember at the time reading something or other that listed a bunch of combos, and just being in awe of the obviously wildly superior skill that was required to even have a snowball’s chance in hell of executing one. Hell, half the time getting the D-Pad roll needed to pull off a fireball was slightly beyond me, and I say this as someone who was generally speaking one of the better video game players in my school. Finding the space to execute an even more complex chain of moves within the high velocity flow of an actual fight was simply not going to happen.

But for those capable of that sort of precision, especially when they were playing each other players of similar skill, the game is an infinitely varying set of tactics and responses, moves and countermoves. Moreover, and more fascinatingly, it’s a self-sustaining one; each new development and refinement seeming to move not towards some teleological point of optimal strategy (at least not in the later iterations of the game; the original, famously, converged quickly on Guile as an essentially undefeatable character) but towards yet another cycle of adjustments and responses. It is a game for artistry, in short.

But the thing about Street Fighter II is that for all the degree to which its system enables a complex and ever-evolving system of strategies and techniques, it’s also a game you can play perfectly well by button mashing. Well, OK, perhaps not perfectly well, but perfectly enjoyably certainly. Which is to say that it’s a game that is fun at essentially every level of its own complexity.

Part of this is its origin as an arcade game, where it had to successfully be entertaining even to a neophyte player on their first quarter or else it was never going to get another. And indeed, Street Fighter II was one of the last flourishings of what was once one of the most fundamental models of video gaming, the home port of the arcade classic. (Indeed, it’s worth recalling that a failed arcade port was the turning point from massive success towards the 1983 video game crash.) And some of that is obvious playing the game – simply put, the gulf between what the arcades and the SNES could do was minimal, and the two were only converging faster.

But it’s still the arcade tradition that this game fundamentally fits into. It wants two people to step up to an arcade cabinet, grab joysticks, and face each other down, with the pounding lights and clanging of the arcade echoing all around like some mall-based Thunderdome. And even on the Super Nintendo, it, like Super Mario Kart, is a decidedly two-player game, and thus one I always had a somewhat complex relationship to. But its also one I would happily rent for myself every once in a while and just plug away at, honing my own skills and styles. These were never terribly complex – my two best characters were always Chun Li and E. Honda, notable as the two characters with special moves that can be activated by mashing a single button rapidly. (Or, if you’ve got a turbo controller handy, just by holding it down and becoming a near-unstoppable killing machine, especially with E. Honda in Street Fighter II Turbo where he gained the ability to advance forward while executing the Hundred Hand Slap. Cheap? Indubitably, but hey.) As with Mario Paint, the extent of my artistry was limited compared to what some have done with the game, but it was mine, crafted, honed, and loved.

And there were really no other two-player games this was true for in the era. I mean, there were others I indulged in, but this was the only one that was ever a significant fascination; one that I instinctively think of as a game I liked and that was a significant aspect of my childhood. It is not one I look back on with unvarnished nostalgia, of course. In hindsight its racial politics are extremely distressing, what with it featuring a Brazillian “beast man” out of the jungle and Dhalsim, a character that appears to have been created by taking a grotesquely stereotypical “African witch doctor” and moving him to India where he’s instead a Yoga master, because that’s apparently better. And there are definitely some issues surrounding Chun-Li, whose panties are visible in several instances.

But there’s, perhaps ironically, not really a sense that any of this is punching up, down, or in any other direction. The world of Street Fighter II is simply to baroquely silly for that; a primary colored world of fundamentally absurd characters punching each other for what are usually endearingly idiosyncratic reasons. (E. Honda, for instance, is just outraged that Sumo Wrestling isn’t taken seriously, whereas Dhalsim seeks spiritual enlightenment through setting people on fire.) The game’s numerous lapses in judgment, while grotesque, feel like problems with the gamemakers, as opposed to with the game’s world and ideology, in much the same way that Sunflower does not feel like a fundamental flaw in Fantasia’s ideology or the basic idea of cartoon mythology. It’s a strange thing to claim of a game where you can literally bite someone’s face off and, in an odd lapse of SNES censorship, have what is clearly blood spurt out, but there’s a fundamental innocence to it that, more than twenty years later, still feels  worth celebrating. Or at least, that I still want to celebrate. When I’m not smashing my controller in rage because of how hard Ryu is to beat as Chun-Li.