This essay first showed up on Medium on the 28th of January. El chided me for not posting it on Eruditorum Press, so I kept an eye out for an 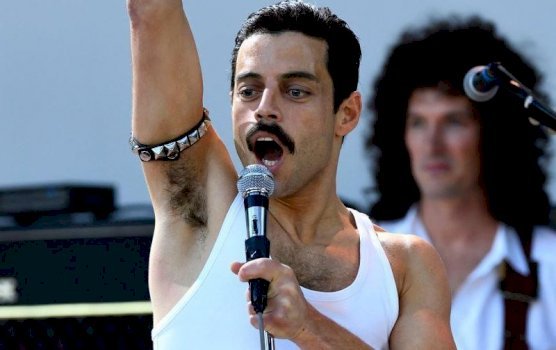 opportunity to repost it. With the Oscars coming up and likely to reward this piece of trash for being the toxic garbage it is, I figured pushing my take into the limelight would be a good move. Given that I’m compeltely satisfied with the essay (something you’ll never hear me say about my work), I’ve chosen to not edit it at all and am presenting the piece as it initially appeared. With that in mind, here is me getting extremely pissed off at Bohemian Rhapsody. While we’re here, my Patreon has made a reasonably successful debut. If you like this essay, consider checking it out.

It’s probably pointless to write about Bohemian Rhapsody months after its release. Everyone has decided how they feel about it by this point. Numerous intelligent thinkpieces have been written about this film already. The long-term critical and popular consensus on it has already been decided. One more review in the mix as Bohemian Rhapsody is getting showered with awards seems like an extraneous move.

This isn’t a review. This is a spur-of-the-moment angry rant by a newly out lesbian about what is probably the most popular movie about a gay man ever made. What you’re about to read is less a professional review and more a gigantic “fuck you” to any notion than Bohemian Rhapsody is anything other than a horrifically made, garish, embarrassing, homophobic pile of shit.

I mean, where do you begin with this thing? It’s barely even a movie. There’s no ethos or aesthetic to it. Certainly Bryan Singer lacks a unique visual style and resorts to throwing bland sleekness and iconography at the audience in playing of saying anything about Queen, glam, prog, stadium rock, or pop music. Bohemian Rhapsody has fuck all to say about the broad aesthetic strokes of Queen. It has no sense of place or the music scene Queen developed in. Instead it’s a trivia game, one that throws iconic moments and factoids at its audience like someone dangling a catnip-filled toy mouse in front of Freddie Mercury’s tabby, as if to say “you see this? You like this, don’t you?” Even leaving the film’s continual moments of historical inaccuracy out of this assessment (and boy, BhoRhap tells some whoppers), its attitude to its audience is insulting. It’s cynical and patronizing, assuming people will lap its utter lack of moral and artistic content up as long as it throws enough guitar solos at them.

In lieu of its not being about things, BhoRhap is just… boring. Every scene in it is predictable, by-the-numbers biopic schlock, where you can almost predict the lines of dialogue before they come in. The script has a tin ear for dialogue (“I wrote it for Mary.” “If you say so.”), substituting narrative logic and internal continuity for tedious cliches. BhoRhap’s shape is made up of scenes you’ve seen in a thousand other films with some famous people in them. Everything is all gestures at things that should be in the movie which don’t receive a modicum of fleshing out. The bulk of the cast receives minimal characterization: the filmmakers seem to have interpreted John Deacon being “the quiet one” as “he has no personality so give him nothing to do,” poor Mary Austin is treated as Mercury’s hang-on squeeze rather than his lifelong best friend (who, despite sharing several scenes with Mercury, has exactly zero written chemistry with him), and Brian May and Roger Taylor are simultaneously flattered by the movie and given next to no personality (as a side note, the funniest note of the film is the idea that May, Taylor, and Deacon were always hard-workers of integrity while Mercury spent his hours partying, as if three rock stars would dodge hard-drinking and orgies). Despite the actors being consistently good across the board (for all that Rami Malek is a popular target for some crusading viewers, he is faultless in this film), there’s a total absence chemistry among these characters. But whatever. This is a rock biopic, so it has to behave like a rock biopic. Never mind justifying itself — it just has to throw a tacked-on reconciliation scene with Freddie’s family here and a “Killer Queen” there.

So rather than take a stand on the myriad of subjects it could engage with (and believe me, there’s a fascinating movie in Queen that Todd Haynes is always available to film), BhoRhap takes potshots at a huge portion of who its target audience should be: gay people. The homophobia people have criticized this movie for hasn’t been exaggerated by really anyone. Actually, it’s been understated. While the movie’s fraught relationship with homosexuality has been part of the discussion since, hell, probably before its first trailer, it’s hard to grasp the audacity of BhoRhap’s homophobia. Its overarching plot is basically Freddie Mercury’s downfall via his gay life. I mean, wow. This is a film about one of the most famous gay men who ever lived. Someone achieving the status of a gay icon while storming across the world stage and managing to keep their private life to themselves andtragically becoming one of the thousands of people to fall victim to AIDS would make for an astonishing, sad film. I run the risk of sounding hagiographic here, so let me clarify myself: I’m under no impression that Freddie Mercury was a saint. He was a Tory who made his name fetishizing royalty and broke with the UN ban on apartheid South Africa so he could perform where he pleased. However, I’ve seen nothing to suggest he was the emotionally abusive sexual assailant depicted in this movie (Mercury commits sexual battery twice in the same sequence. Can you tell who directed this crap?) More pertinently, I have seen plenty of evidence which leads me to conclude that Freddie Mercury was, if not bisexual at the bare minimum, gay. Funnily enough, BhoRhap sails by this fact. Oh, it’s acknowledged in dialogue: Mary Austin tells Freddie he’s gay. The scene where Mercury and Austin terminate their engagement due to Mercury’s gayness (a conclusion they arrive without speech — this movie has no concept of coming out, or any other fact of real gay life) is the one scene where Mary Austin’s feelings are allowed any priority by the movie. That’s not because Bryan Singer actually gives a shit about women’s feelings — it’s because Austin is a straight woman. And the heterosexual viewpoint is what counts to Bohemian Rhapsody. Gayness has no room to breathe in this Freddie Mercury biopic. It’s not an aspect of Freddie’s life that comes up in the first half hour of the movie. Freddie discovers gayness as a temptation on the road to fame. He has several scenes with Mary Austin at her expense (Singer has to be sexist as well as homophobic). In over two hours of screentime, Mercury has two gay kisses and no intimate romantic scenes alone with men. Men exist to distract him from rock ’n’ roll and his woman fiancee. Bohemian Rhapsody is the end game of rockism, where queerness serves as a distraction from sex, drugs, and rock ’n’ roll.

And with this revelation we can touch on the movie’s most repulsive, morally bankrupt, and insidious moment, which is the scene in which Mercury is diagnosed with AIDS. Bear in mind that AIDS wracked up a catastrophic death toll in the Eighties alone, while right-wing governments either turned a blind eye to the epidemic or blamed it on those degenerate homosexuals failing to keep it in their pants. Mercury is one of the most famous individuals to die of AIDS. There’s some brief acknowledgment of this historical travesty as Mercury watches some real footage of AIDS treatment on TV. After this he goes to the doctor and receives his medical death sentence. As he walks out of the clinic, Mercury and another AIDS patient sing “ayyy-o,” as Mercury famously does in his Live Aid non-lexical improvization.

This moment is the death knell of a film that’s already been appalling for nearly two hours. Bohemian Rhapsody takes a tragic moment in a real person’s life and turns it into an origin story for a pop song. This vile scene encapsulates every vice in the entirety of Bohemian Rhapsody. It has nothing to do with creativity or perseverance of gay lives. This movie cares nothing for how real gay people might feel about seeing one of their favorite artists’ struggles happen onscreen. It’s just about how cool rock ’n’ roll is.

The subsequent Live Aid re-enacment is hence rendered meaningless. It is impossible to care about this well-shot sequence of fun pop songs performed identically to the way they were played in 1985. This is just a scene Bono could have written built to by two hours of amoral garbage.

I came out as transgender less than two weeks ago. I have alienated my family and had to start my life over in a state six hours from where I spent most of my life. In the process of coming out to myself and others I’ve written scholarship about glam rock, popular music, and queerness which I’m proud to have on the Internet. Bohemian Rhapsody has made me feel spat on. Even ignoring the fact its director is an unrepentant rapist, a rightfully massive part of its reception, this movie is evil. It hates women, it hates gay people, and it hates any idea that art might be worth engaging on an intelligent and critical level. If you haven’t watched Bohemian Rhapsody, don’t. Go watch Velvet Goldmineinstead, an actually well-made film about the aesthetic ethos of glam and the formative effects it had on gay lives. Let Bohemian Rhapsody die in a ditch. It’s an insult to art and to anyone who’s ever been marginalized. Let them eat cake? More like “dunk their heads in a septic tank.”

Christine Kelley writes about speculative fiction and radical politics from a queer revolutionary perspective. Currently her main project is Nowhere and Back Again, a psychogeography of J. R. R. Tolkien's Middle-earth. Her first project was the now semi-retired blog Dreams of Orgonon, a song-by-song study of Kate Bush.Support Christine on Patreon.
I Don’t Speak German, Episode 7 – The Southern Nationalists Room for the Life