Bizarrely, Though, it Comes Back: The MST3K “Pop Between Realities”, Two Years On 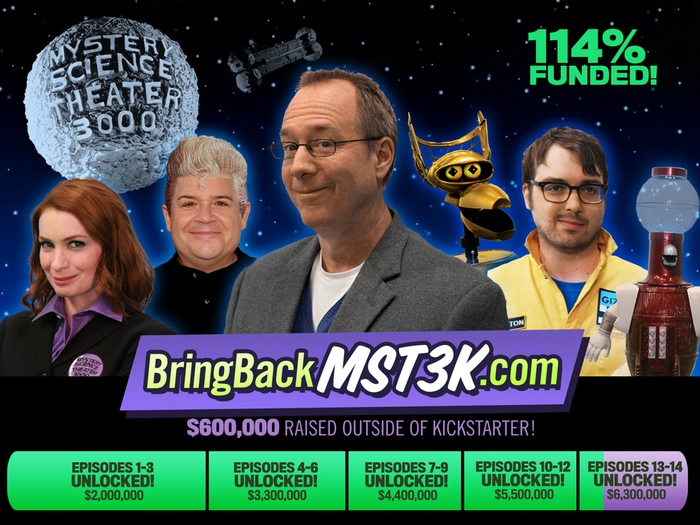 A formal announcement that Mystery Science Theater 3000 was coming back was a long time coming. Joel Hodgson had prodded at the topic in April 2014 at the end of a WIRED oral history of the program, a mere five months after my article on what was then PhilSandifer.com.

Ah, remember that article? I was so naïve then, saying things like MST3K was “some sort of bizarre mirror-world version of [Doctor Who]”.

“If MST3K hadn’t gotten canceled fifteen years ago, it’s possible we could have had 4 or 5 hosts by now, and it would be just like Doctor Who…” –Joel Hodgson

Ridiculous, right? I even had this whole section on how the show was about the ability or lack thereof to fight back against a preconceived narrative.

“The story of MST3K has been going for almost thirty years, but now – thanks to you – we’re finally getting to throw out the ending that we’ve been stuck with for fifteen years, and start writing the next big chapter.” –Joel Hodgson

I mean clearly I was just plain wrong about everything. Nineteen-year-old me was kinda dumb, wasn’t he?

In all seriousness, I’m not here to brag, I’m here because I feel like Joel repeatedly comparing the program to Doctor Who and framing its return in terms of narrative give me an interesting launchpad to expand on some of those ideas I haphazardly tossed onto someone else’s website two years ago.

Let’s quickly reexamine my claim that the period from 1999 up through now do not, in fact, constitute a sort of “Wilderness Years”. A Wilderness Years, I decided back then, requires a certain tethering to the source material in terms of intellectual properties in a way that post-MST3K material rejects. You can’t write a Doctor Who story without associated characters and such but you can write an MST3K story so long as you’re making fun of things. I’m not entirely sure how well that logic holds up, but I think ultimately what I was getting at is that MST3K‘s central conceits travel a lot better than Who‘s do by virtue of their relative simplicity.

It’s a harder argument to make now that MST3K is actually coming back. But ultimately “Wilderness” implies a sense of loss and distress that none of these spin-off projects have. RiffTrax has been more than successful with its DVDs and cinema showings. Trace Bealieu and Frank Conniff appear to be having a lot of fun with The Mads Are Back. The motley of fan projects that’ve sprung up have always been more fun things to do than a grappling at an absence. They all seem to be, as Joel might put it, “New Beginnings”.

So having rejected one sense in which MST3K might operate with Who, let’s examine what Joel does mean when he makes this comparison. It’s possible he means just in terms of the general conceit of replacing the cast and upgrading the set every few years, and his other parallel—to Saturday Night Live—seems to back this up. But its coupling with the way he frames the return, as one of a narrative having its ending snuffed out and replaced with a second beginning to a new narrative, makes me think I might’ve gotten it wrong those two years ago in some vital ways.

The crux of my analysis at the time was a comparison to the TARDIS to the Satellite of Love. The TARDIS is a machine that brings characters into stories and lets them play around, while the Satellite of Love dumps new narratives into itself and traps them there for two hours. On that level, it’s a pretty clear case of inversion. But for an article that was so insistent that riffing was the heart of the show, such that the mere continued existence of riffing constituted the show living on, I was strangely ignorant to its powers.

And what’s funny about this is that one of the things I most remember about my formative experiences with the program is a review I read online, one that read roughly “MST3K taught me that you don’t have to take the culture lying down, that you can fight back.” Riffing, itself, constitutes changing the narrative. It turns a dull movie into a funny one, a propaganda film into a scathing satire of itself, a goofy romp into something secretly strange and terrifying, and a strange, terrifying film into a goofy romp. Riffing changes the whole tone and message of a given picture, in much the same way the intrusion of the Doctor can change a narrative. An early ad for the program even plays this up:

I even missed the significance of characters from the films visiting the Satellite. Again, the reversal of how this works from the TARDIS makes it seem straighforward, but the characters that visit never really resemble their actual selves. The show warps their narratives from the outside by bringing them in, filtering through their midwestern, low-rent sensibilities. The sputtering gatekeeper from “Manos”: The Hands of Fate becomes a pizza boy. Pitch the Devil from Santa Claus becomes a B-list celebrity to a couple of fawning mad scientists. The giant killer truck from Warrior of the Lost World settles down with a wife and kids after the film ends. And meanwhile, what sort of lasting effect do they or the movies they hail from have on the show’s world to constitute a “warping”? Basically none. The films never manage to actually change MST3K‘s status quo. Only the show’s actual characters can do that.

So of course Joel frames the resurrection of the show in terms of a new beginning, because Mystery Science Theater 3000, at its core, has always been about rejecting narratives and building new ones. It doesn’t matter if you’re physically trapped and all you can do is throw barbs. Barbs have power.

So yeah, MST3K never needed escape attempts or time-traveling hijinks to be Doctor Who. It was Doctor Who all along. You could tell by the effects.

A Brief Treatise on the Rules of Thrones 3.01: Valar Dohaeris Myriad Universes: The Worst of Both Worlds Part 4: And Death Shall Have No Dominion