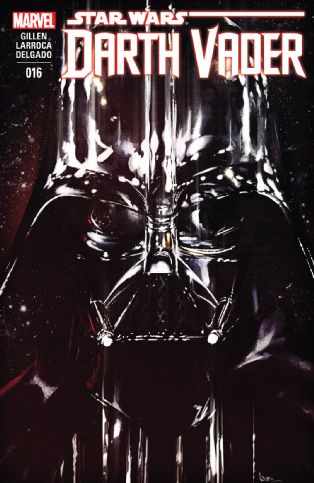 A very Marvel-heavy week, which is helpful in comparing some of the more intermittently frustrating titles in my pulls.

Guardians of the Galaxy #5

Like this, which will be the last issue I pick up. Bendis’s books always meander, but his Guardians has become pathological in that regard, lurching from point to point without anything recognizable as an overarching reason. With this issue, the new post-Secret Wars setup is undone and we return to the old setup while simultaneously providing a new origin for Yotat, which is at least two origins too many for a sublimely pointless character. Fun characters, as the movie has shown, but this needs a new writer.

The extent to which Waid’s pacing and shape on this book is thoroughly inept is genuinely shocking. The ouster of Ms. Marvel on the cover is awkward and unmotivated in the extreme – a transparent contrivance made all the worse by its complete lack of suspense. For the third time running the enemy is an out of nowhere silliness. I have no idea how a creative team and cast this good can be this bad, but man, it stinks. Will stay on through the Pleasant Hill crossover at least, but what an abject disappointment of a book this is.

This continues to slowly bend towards being pretty good, though the sense of its improvement being two steps forward one step back continues. This one focuses pretty much entirely on supporting cast, which is a mixed blessing. I still have trouble particularly investing in the high concept inversions of Matt Murdock as the Kingpin (although his t-shirt is hilarious in a sort of Eviler Seth Bingo way) and the like, but what the book is doing with them works, and that counts for a lot. Frustrating, but not in a way that makes me think about walking away from it.

A slow-burn start to an arc handled with the efficient competence you’d expect from Gillen. Nice cliffhanger, and some good character bits, but on the whole a lull in the book.

Digital code: FCMQSR0FXZW9 (also a zero in there)

The decision to do two-issue arcs here hobbles it a smidge, with a good story that lacks some of the room to breathe that it could probably use. But the takeaway there is really “good story,” with the whole Demiurge/horrific demonic possession arc wrapping up in a way that pays glorious homage to the Young Avengers history of the characters, not so much on a plot point level as an aesthetic level. “Horror! Life is horror!” might end up being the funniest line of the week. In fact, yes, it is. Delightful, wonderful, kinda mispaced.

The “teen hero gets behind on everything” schtick feels a nbit tired and played out as Ms. Marvel plots go, and saps this book of some energy, as does the degree to which it retreads All-New All-Different Avengers (although obviously it does a much better job with those plot points). But by book’s end a drab setup becomes a fascinating one due to a truly inspired bit of weirdness, and the opening scene of Aamir introducing his would-be fiancee to the family is fantastic, fantastic stuff. I expect the latter bits of this arc will be stronger.

Top notch Marvel, capturing the psychedelic sizzle of Jim Starlin-style cosmic action and packaging it in the human and character-based pizazz of an Al Ewing book. At once classic and utterly of 2016, this remains one of the handful of Marvel books to basically never disappoint. Love the setup for the next issue as well. Just needs more Ms. America. (Seriously, Marvel, where the fuck is our Ms. America solo series?)

Digital code: FCMQ1K0CCAZ3 (I don’t think the letter O actually gets used in these codes)

The pleasure of this book has consistently been watching Warren Ellis calmly unspool a series of virtuoso tricks on the clunky old instrument that is James Bond. It is not Ellis’s best work, nor does it make a case for the brilliant future of James Bond, but it is nevertheless a stunning performance. This time Ellis gets to do his version of “no Mr. Bond I expect you to die.”

And here, on the other hand, is Ellis at his pomp, letting loose his tricks on his own material, backed by top notch creators he’s determined to get the best out of. The first arc of this was rocky; the second is explosively good. Also, for the first time I noticed the obvious parallels between the CCCU in the book and the CCRU in which Nick Land got his start. So Warren Ellis is doing his insane and ambitious tricks over territory I’m hugely invested in anyway. Seriously, this is a must-read book – officially jostling with WicDiv and Providence for my favorite thing coming out right now. Must go figure out what to drop from my Hugo ballot to make room for volume 1. And reread volume 1, come to think of it.