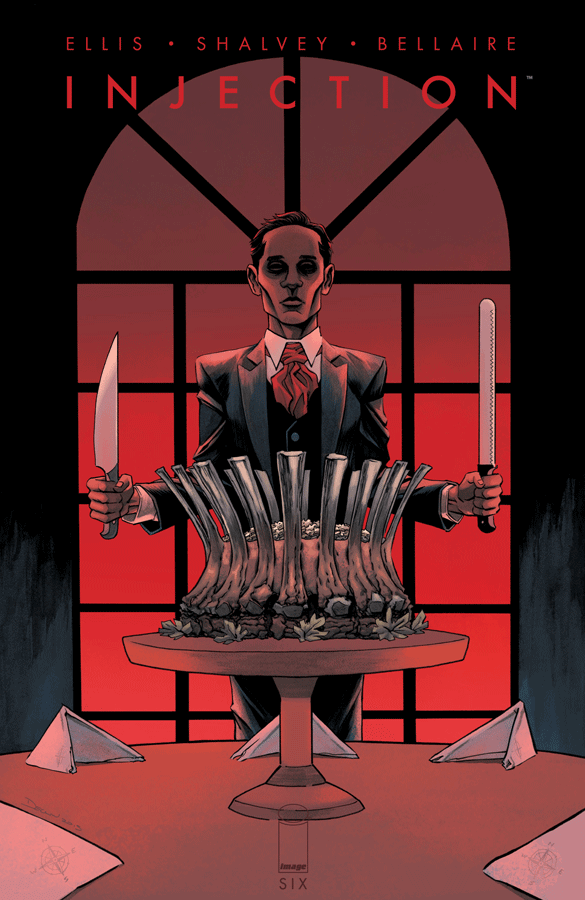 Digital edition codes will work for the first person to try to use them at marvel.com/redeem.

This is the way the world unends. Not with a bang, but with a monstrously delayed issue that’s basically the long lost final act of Hickman’s now four-year-old Fantastic Four run in which large swaths are conveniently set in a featureless white void so that Esad Ribic doesn’t have to draw backgrounds. This isn’t necessarily a bad conclusion to Hickman’s big Marvel story; indeed it’s a pretty good one if you’ve been following and committed to Hickman’s thing for the six years plus he’s been doing it in the Marvel universe. And if you’ve actually kept track of that, more power to you. But as a conclusion to Secret Wars it’s a soggy mess.

Hobbled by the extent to which Waid is determined to reiterate both the classic Lee/Kirby Avengers #1 and the first Whedon film. When Waid is writing a team book about the specific characters he has here – and it’s one of the best Avengers lineups in memory - this is a real treat, but he doesn’t get to it nearly often enough to make up for the formulaic punch book it is the rest of the time. One of the most disappointing launches in memory, doubly so for Adam Kubert’s sleepwalkingly generic superhero art.

Guardians of the Galaxy #4

There’s a part of me that just wants to say “dude, stop trying to make Yotat happen” at this point, but for all that the cliffhanger’s a bit of a swizz, the bulk of this book is the first real demonstration of the appeal of Bendis’s Guardians that this relaunch has had – a team book full of personalities and with the space for them to get multiple good moments per issue. Unpretentious and at this point a well-worn Marvel style, but as I often say about Bendis, when it works it is like slipping on your favorite pair of shoes. Actually I’ve never used that metaphor before because it’s an appalling cliche. But that fits too.

Vader Down ends strongly, if with an issue that suffers from having too many things to tie off. The limitations of the form are evident – most obviously in the way in which Vader and Luke can only ever have a near-miss encounter here – and at times the pull of restoring the status quo so this can still be “canon” between Star Wars and Empire Strikes Back make the construction a little too visible. And I’m not entirely thrilled with Aphra ending up in the book I don’t read instead of the one I do. But on the whole, this was a glorious little Star Wars romp that was well-timed to coincide with when the cultural mood was right for a Star Wars romp. Interested to see what the book does once it gets its head down and goes back to its own plots, though.

Another really strong issue of this. I’ve been a bit tortured on the alternate universe premise of it, but when it drills down and focuses on fiddling with raw archetypes of Spider-People the AU makes it absolutely sing, and the Spider-Gwen/Green Goblin confrontation is perfectly suited to that, with iconography aplenty to riff on. This is tight-focused character work, with the reader inside Gwen’s head for almost all of it, and it’s an absolute stunner – tense, emotional, and above all interesting throughout. Really marvelous.

Vivek Headland is the world’s most brilliant detective. And there is something very wrong with his ham sandwich. This is Warren Ellis at his best – smart people doing insane things in a story that’s full of ideas fizzing and bouncing off one another, well-tailored to a top notch art team. The first book of this was a slow burn; this gets off to an absolutely storming start, and is a fantastic jumping on point to boot. Massively recommended.