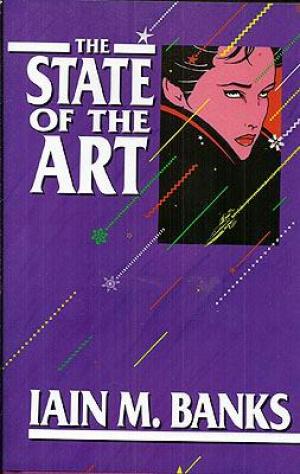 “The State of the Art” surrounds Use of Weapons, both diegetically and in publication. Externally, it was first published as a stand-alone novella in 1989, then became the title piece of a short story collection in 1991. Within the narrative, on the other hand, it takes the form of an account composed by Diziet Sma shortly after the events of Use of Weapons (“The State of the Art” is addressed to someone named Petrain, Use of Weapons has Sma tell Skaffen-Amtiskaw [revealed at the end of “The State of the Art” to be the story’s diegetic editor] to “send a stalling letter to that Petrain guy” before leaving to find Zakalwe) that, among other things, relates the circumstances by which she came to leave Contact (the Culture’s diplomatic service) in favor of Special Circumstances (the more interventionist intelligence service within Contact). It demands, in other words, to be read in context with that novel.

This does it no favors. Use of Weapons is, as mentioned, essentially the last Culture novel, at least in terms of what Banks created the Culture to do. “The State of the Art,” on the other hand, is a joke in which Banks goes and does one of the things that people were always going to ask him about until he’d do, namely have the Culture meet Earth. From the start, this was something the novels quietly resisted, with Consider Phlebas going out of its way in its epilogues to specify that it took place in 1331, so as to emphasize the complete irrelevance of humanity, then preoccupied with the Genkō War and Ibn Battuta’s visit to Kilwa, to its events. The Culture is pointedly not humanity’s future – its utopianism is altogether more abstracted than that.

Still, the possibility lingers tantalizingly, and Banks, a sci-fi guy to his core, made the eminently sensible decision to get it over with. And, inevitably, “The State of the Art” runs through all the obligatory jokes, most of them with delicious wit and charm. The best focus on Li, a member of the Contact expedition to Earth (covertly observing it in 1977) who becomes a die-hard Star Trek fan, attempts to persuade the rest of the team to elect him captain of the ship, which culminates in a campaign speech (while holding a real lightsaber) in which he serves the crew various dishes vat-grown from human cells such as Stewed Idi Amin, General Pinochet Chilli Con Carne and Richard Nixon Burgers, then vows that if elected captain he’ll destroy the planet because it is silly and boring. But there are some other good ones, such as the ship trying and failing to request (via postcard) that the BBC World Service play “Space Oddity” and dedicate it to the Arbitrary.

Other characters, meanwhile, espouse other standard and inevitable positions. One – Dervley Linter – decides he wants to renounce the Culture entirely and live his life as a human, having all of his Culture-specific abilities removed in the process. Sma, meanwhile, longs to save the Earth from itself, taking the interventionist position that, notably, has been the defining aspect of the Culture over the first three novels.

This, of course, is a no go, as should be self-evident given the 1977 setting. More to the point, it’s the right decision – the single worst version of “the Culture meets Earth” that Banks could possibly write would be the cloyingly utopian Star Trek fantasy of aliens coming and elevating us to enlightened technological socialism. But this aesthetic fact necessarily hangs over the entire story, forcing it to be an explanation for why it’s not the utopian fantasy.

Banks’s solution to this problem is at once clever and in keeping with the general theme of slight inevitability – he has the consensus of Contact be that Earth should be left alone as a control group in the Culture’s data-based approach to interventionism, so that they can better understand the consequences of their foreign policy. And this gets set up quite early on, when Sma describes the planet as “an almost classic sophisticated stage three perfect enough to have come right out of the book, from a footnote if not a main chapter,” and, subsequently, that it was “a little too close to some perfection, slightly too textbookish for its own good.”

This is hilarious and brilliant, in that it’s essentially a diegetic restatement of an extra-diegetic problem. The Earth is, by Culture standards, necessarily “textbook” because it is literally the sole source of data for every single assumption about the nature of civilization to comprise the Culture. It’s the perfect example for the simple reason that it is in reality the only example. Any answer to “why can’t the Culture save us” is necessarily a cop-out, but this is at least an honest cop-out: it can’t save us because it is us.

That question answered (and with an answer that fundamentally consigns “The State of the Art” to being a comedy side-novella and not a proper Culture novel), Banks is free to move on to his plot, which is mainly about Dervley Linter and his desire to abandon the Culture in favor of humanity. Interestingly, he’s not the only example of this in The State of the Art as a whole, which also includes a short story “A Gift From the Culture” about a Culture expat, a fact that quietly reinforces the validity of Linter’s position.

But the fact that Linter needs to be covertly bolstered by another story indicates how fundamentally tenuous his position is, and not just because Sma’s narration weights the scales pretty heavily against him. The question he asks – what’s better, late 20th century humanity or the Culture – is one that the basic existence of the Culture series already answers. So while the basic stakes of Linter’s story are more up in the air than the interventionism debate – Banks could absolutely get away with leaving a single ex-Culture member on Earth in 1977 if he wanted to – the question of where “The State of the Art” is going to come down in the underlying debate is a non-entity. And in a way that’s essentially admitted in the denouement, a recklessly contrived sequence in which Linter maybe-on-purpose gets killed in a mugging, which neither Sma nor the Arbitrary prevent.

Banks still puts a real and substantive effort into making Linter’s viewpoint substantive, even as it remains doomed. Unsurprisingly, this is done by making it an essentially parallel debate to the interventionism one, right down to the way that the questions interact with the mechanics of fiction. At one particularly notable point Banks has Linter give the game away with a quasi-authorial statement as he says, of the human race, “they’re real because they live the way they have to. We aren’t because we live the way we want to.” Which is, of course, true on several levels, including blunt literalism.

But there’s something frustratingly self-defeating about the overall approach that’s epitomized by Linter’s death – a sense of the book curling into the fetal position and admitting the fundamental inadequacy of art in the face of a material world. Again, some of this is simply the inherently doomed nature of the premise. “Thing that was not a good idea does not quite work out” is rather dog-bites-man as such things go. But the fact that “The State of the Art” does not end with a sort of calculated ambivalence but rather with an ending that is borderline petulant in its absolute refusal to offer even the slightest trace of the Culture getting to “help” Earth is jarring and angry.

Indeed, in some ways it’s enough to render Li credible. From the vantage point of a quarter-century on, after all, Li’s “destroy the planet with a micro black hole” argument takes on a certain charming credibility, fitting in well with the general vogue of speculative realism and anti-natalism. And while Li is clearly set up as a comedic element of the story, it’s important to note that Linter isn’t quite taken seriously either – he’s just portrayed as tragic instead of silly. And so the sense of anger implicit in cynically killing off Linter serves, in an odd way, to legitimize Li’s altogether more cynical anger.

But for all of it, what sticks out is the strangely detached tone with which Banks catalogues his own planet. Earth is reduced to a series of set pieces, entertainingly run through, but still fundamentally not a book about the world. In some ways it can’t be – the utopia the Culture offers is fundamentally a technologically determined one as opposed to one that emerges from social factors. Perhaps the most revealing line is one repeated in both “The State of the Art” and “A Gift From the Culture” (and originally from Consider Phlebas), Banks’s famous “money is a sign of poverty,” which is brilliant, incisive, and absolutely useless.

Put another way, what the Culture is good at, as an idea, is that it imagines a utopia on its own terms, without having to fuss unduly with the question of getting there. And so “The State of the Art” doesn’t just ask questions that fiction in general can never offer an entirely satisfying answer to – it asks questions that the Culture is specifically designed to avoid having to answer. It’s not just a case of Banks doing the inevitable dalliance with an idea that’s more obvious than it is good; it’s a case of Banks writing a story that necessarily put his career-best idea in what is possibly its single least flattering context. That the result concluded on a note of glaring anger is surprising only in its unflinching honesty.

Banks would not write another Culture novel for six years.