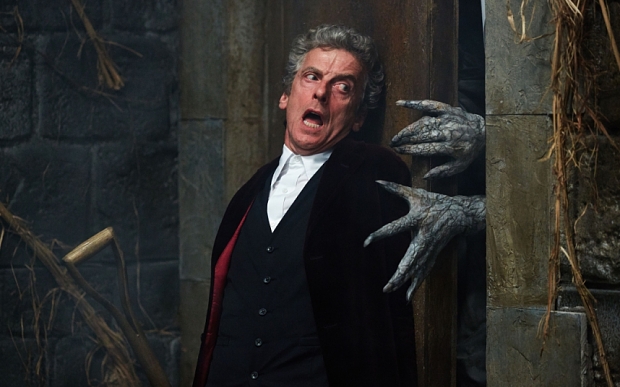 As I’ve said many a time, what I want out of Doctor Who is something I’ve never seen before. And so I’m not going to argue with anybody who puts this among their masterpieces. If you want to claim it as the equal of Listen or Blink then be my guest. For me, it’s a solid 9/10, and won’t be ahead of The Zygon Inversion in my rankings, so the result is that we’re going to start defensive and then move to the positive.

I suspect the crux of my disagreement with those who will put it higher is simply how much one values the basic idea of the “experimental” in Doctor Who. Which in some ways brings us back to Sleep No More, and in others back to In the Forest of the Night, two episodes that were distinctly experimental and also distinctly flawed. In both cases I value them considerably more than the consensus, and specifically for the odd things they did. And moreover, yes, obviously anyone who’s read any of my work on Doctor Who recognizes that I love its weird tradition, which has always been a huge part of the show, from The Edge of Destruction on. I’m definitely in the general camp of fandom that thinks The Mind Robber, The Deadly Assassin, Warrior’s Gate, and Vengeance on Varos are all cool just for being what they are.

But equally, the “experimental” field is crowded these days. At even the stingiest definition you’ve got to tag Listen, Last Christmas, Sleep No More, and Heaven Sent as experimental episodes in the last two years, and I’d be inclined to widen the net, and count bits of relatively non-experimental episodes like the Beethoven’s Fifth bits of Before the Flood and the two-hander first half of The Woman Who Lived, as well as much of In the Forest of the Night and the direct to camera bits of Kill the Moon. By and large this is why I’m loving the show so much right now. But it causes a small but distinct problem for something like Heaven Sent, which is that the fundamental limitations of how experimental Doctor Who can be really become visible when they’re run up against as often as they are these days. Doctor Who can do brilliantly experimental takes on all sorts of genres: western, Vikings, Restoration comedy, political thriller. But it can’t do an experimental take on experimentalism. That’s just not what it’s for.

This isn’t helped by the fact that the fundamental limitations of how experimental Moffat can be have long since become visible, and for the admirable reason that he keeps punching away at them with glorious stubbornness. This is, somewhat flagrantly, the basic concept of Time of the Doctor done as the show-off sequence in the middle of His Last Vow, with a middle finger emphatically raised at the entire “Moffat fetishizes the Doctor and this is a problem” crowd.

All of which is a very long way of saying that, slightly depressingly, this manages to be a hugely experimental one-hander that doesn’t actually do anything new aside from be a hugely experimental one-hander. And that is in some real senses less interesting to me, the sort of person for whom a rotating puzzle castle is a cliche, especially compared to the novelty of a political thriller about Zygon ISIS resolved as a monologue about war as a game show or robot Vikings defeated by eels set to Yakkety Sax. I know my experimental theater, room escapes, and teleporter philosophy discussions well enough to see all of the strings here. The resulting effect is like seeing your twentieth Dave McKean comic book cover or hearing your tenth FKA Twigs song: this is cool just like all the others.

So it’s not exactly surprising to hear that Moffat wrote the Christmas special, two scripts after this, not knowing if it was his last ever Doctor Who script. This feels like someone who’s realizing that they know all their own obsessions. Indeed, you can frankly read it as a metaphor for Moffat writing the same script over and over again. But all of that also means that it feels like someone who is well aware that they’re at a creative peak, and are determined to use it.

The highest compliment to pay to it is, ironically, the one that’s why we just did the six hundred words of hesitation, which is that Moffat makes it look easy. The real gems of this are in the first half, where everybody is figuring out how to make it work. Once the Doctor has his skull everything actually is easy, and going to go fine. The “and the shepherd’s boy said” montage is by no means idiot proof, but Talalay and Gold were always going to nail it, and it’s obviously where Moffat started from, so once he gets there you can all but hear the sigh of relief.

But those first few scenes are astonishing. Everything from the credits to the first TARDIS scene is spine-chilling, less because of the details of what’s happening (although what works for It Follows unsurprisingly works for Doctor Who) than because you can tell that Talalay, Moffat, and Capaldi are all scared shitless. Capaldi, in particular, has never seemed so method.

But also phenomenal, and to my mind much easier to miss, is the digging scene, where Moffat uses a change in who the Doctor is talking to as a character beat, switching from Clara to his unseen captors as he loses focus and gets angry. That’s the point to really take a step back and appreciate how effective a method everyone has built for storytelling, because it’s something that happens entirely instinctively, not as an obvious solution to “and now what do we do.”

So yes, obviously I loved this. The ultimate regeneration story, with the Twelfth Doctor not quite regenerating into himself, over and over again, dying billions of times in an aeons-long escape from one dinky little miniature prison in the gap between Clara dying and a Time Lord Western. The sheer weirdness of seeing just one iteration of the Doctor’s folly at first, so that it just looks like the Doctor trying to break his hand, with all the kind of broad comedy excess that implies. The accordion version of the Twelfth Doctor theme when the door opens onto the solid wall. It’s all great stuff. But I think I’m more interested in the moments when Doctor Who is less ostentatious right now and more mixing weirdness in with other things.

Black Friday “A person who trusts no one cannot be trusted”: The Nagus