I Wanted To Save The World: Mr. Robot 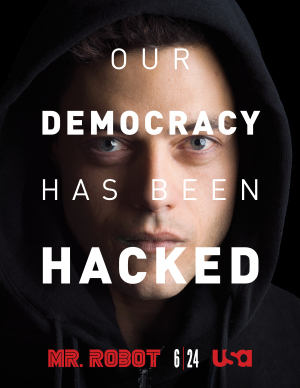 It is almost possible to dismiss Mr. Robot. It’s on USA, a honed brand of basic cable drama that used to summarize itself as “Characters Welcome,” a tagline that more or less accurately described the set of cookie cutter House-style eccentric genius procedurals that it churned out. It features an ugly and pointless fridging at its midpoint, a crass angst-generating murder of a female character by a guy previously implied to have raped her that is as contrived as it is pointless. And its big reveal is that Mr. Robot, the eponymous revolutionary leader played by Christian Slater, is in reality a figure of the main character’s imagination – a hallucination in the shape of his father. It should, in other words, be a show that’s very easy to get a handle on and put into a box, so much so that even its pleasantly anti-capitalist leanings feel staged and fake; anarchism recuperated into just another demographic.

And then, in the ninth episode, something incredible happens. The show has just revealed Mr. Robot;s identity. Following this Elliot, the hacker main character played by Rami Malek (a longtime supporting player making his debut as a leading man here), is quasi-kidnapped by the closest thing it has to a straightforward antagonist, the sociopathic tech executive Tyrell Wellick, who demands to know his plan. A simple two-note piano line begins playing. The scene cuts to the Coney Island headquarters of Elliot’s revolutionary hacker group, fsociety. The lights go on, and a series of brightly lit old arcade games illuminate: Skeeball tables and Space Invaders cabinets. The piano moves to a different chord. Elliot is about to tell him everything; his whole plan to erase the debt record of the world. And then you realize what the music is; a chintzy piano version of the Pixies’ “Where Is My Mind?”

It is, of course, one thing to crassly rip off Fight Club. It’s quite another to nick its musical cue while you’re at it. It’s the fine line between eyeroll and raised eyebrow. The former is depressing in its obviousness. The latter, on the other hand, is intriguing in its brazenness. Much like Fight Club itself (which really pioneered the sort of high-engagement visual style that’s become the signature of the Golden Age of Television that we are mercifully just past) it feels deliberate and thought about. It ostentatiously announces itself as a conscious dramatic decision, as does everything else in Mr. Robot. Indeed, so did its Tyler Durden reveal; “you’re going to make me say it, aren’t you,” asks Elliot in voiceover before the actual line, one of the many voiceovers intriguingly framed as direct addresses to the viewer, whom Elliot invokes before the show has even had its first image, saying, “Hello friend” and explicitly establishing that we are an imaginary friend he will be talking to.

“Hello Friend,” of course, is itself a play on “Hello World,” the first program anyone writes in a given computer language. That’s savvy. As are the episode titles; “eps1.0_hellofriend.mov,” “eps1.3_da3m0ns.mp4” (the season highlight, a masterful dream sequence with a diegetic commercial break), and “eps1.6_v1ew-s0urce.flv,” among others. Indeed, it’s a carefully grounded show; current event references and news footage abound. The show also takes care with its depiction of hacking and computers; simply put, when things are on screen, they look like actual programs people use, not like something whipped up in a graphics department by people actively trying not to make it look like the very machine they’re making it on. It’s not that it’s realistic as such; it’s very far from that. But it’s got the same sort of “this is written by someone who has a basic understanding of what he’s talking about” feel of a Neal Stephenson novel, and this gives it a sense of weight and seriousness.

It is, in other words, a very smart show. And its deliberateness carries through to all aspects of it. Indeed, this is ultimately the point of the exercise so far. It’s telling that the Durden reveal takes place fifteen minutes from the end of the ninth episode. It’s a cliffhanger leading into a commercial break, not an episode resolution. The episode as a whole puts the emphasis on the meeting of Elliot and Tyrell, which is hardly a surprise pairing: the characters have by that point interacted several times. Instead, the suspense comes from the fact that the audience doesn’t entirely understand a relationship they’ve seen several times before – most recently, notably, in a scene presented as being between Mr. Robot and Tyrell, one which the audience now knows to reread, but not how to reread. The actual cliffhanger is simply “what is Tyrell going to say now that he knows Elliot’s plan?” Disconcertingly, Tyrell is then absent from the finale, a problem that haunts Elliot for the bulk of it, and the cliffhanger itself remains unresolved at episode’s end save for the knowledge that whatever Tyrell’s reaction, it wasn’t to stop Elliot..

By this point the narrative has also come to build out other characters impressively: the impulsive anarchist hacker Darlene, revealed late in the game to be Elliot’s sister, a sly epiphenomenon of the main reveal; Elliot’s childhood best friend Angela, who he neglects and pushes away throughout the story, only to have her, at season’s end, be firmly in the lion’s den as an employee of Evil Corp (the multinational corporation that serves as the target of the big hack; the name, Elliot explains to us, is the product of his own mental conditioning to see and hear the name that way [intriguingly, even when Elliot is not present characters refer to it this way, creating a complication of narrative even in scenes Elliot is not in that involve information he is not privy to]) with the immediate attentions of the unsettlingly jovial CEO; and a host of smaller characters like Elliot’s boss, his therapist, and Tyrell’s wife, whom Elliot briefly meets in the finale and finds deeply unsettling, suspecting that she can hear his conversations with the audience.

There’s also a growing sense, by this point, that Elliot is hardly the only highly disturbed person in the narrative. This sense doesn’t just depend on Tyrell, who is established early on as a sort of equal and opposite force to Elliot, although the sociopathy of his ambition is certainly key to it. Rather, it’s that Evil Corp is systemically crazy in its worldview; a point emphasized when Terry Colby, a character originally introduced to do little more than be incompetent and be taken down in the first episode, makes a reappearance late in the season and is revealed not so much to be more competent than we’d been led to expect as living in a world where competence doesn’t mean what we thought. And so by the time we get to the post-credit scene of the finale, a cryptic conversation between the disturbingly calm CEO of Evil Corp and the time-obsessed hacker Winter Rose, the point becomes clear: far from being poorly adapted to the world, Elliot, in all his disturbances and eccentricities, is in fact hyper-adapted to it.

This is the real appeal of the series, and where it sets itself up to be something more than Fight Club stretched out to ten hours. It is instead a sort of unofficial Hannibalization of Fight Club, the musical quotation of “Where Is My Mind?” serving much the same narrative role as the textual quotation of bits of Harris’s original novels. Instead of being a story about a crazy guy with multiple personalities, it’s a story about a world that would produce someone like this, and the consequences of his existence.

And at the end of the day, that’s a hell of an elevator pitch. And there’s obvious appeal. It inherits the two best things about Fight Club – its formal complexity and the way in which it treats radically revolutionary acts as a serious possibility within a realistic world instead of a fantastic one. And the status quo at the end of the first season is a real corker: a global financial crisis that seems beyond the scale of the Great Recession that comes in the form of a profoundly neo-Marxist revolution in the form of the complete eradication of the consumer debt record, with legions of people in Not-Guy-Fawkes Masks marching in the streets. Or, more accurately, that as a thing that has happened with nothing that does not seem a survivable cost for any of the perpetrators, and that seems presented as a first step, not as a Hunter S. Thompsonesque place where the wave finally breaks. That’s a heck of a place for a show to be, and a point where its probably a good idea to tune in and catch up so you can see what happens next.

The risk, of course, is that what happens next will be a disappointment. The first season benefited from a pre-existing narrative structure that it’s now exhausted. Now it has to rely on original material; many a televisual narrative has faltered at that point.  But as shows to tip for a good second season go, Mr. Robot seems a strong contender, simply because it’s been inventive and intelligent so many times already. Sure, the fear of a crushing letdown permeates; the final episode is mainly anticlimax, done in the style of a Game of Thrones “morning after” finale, with a “who’s at the door” cliffhanger to top it off, and there’s a nagging sense that Mr. Robot himself will now become a drag on the narrative: Tyler Durden reduced to Six in Battlestar Galactica, if you will. But there’s also that post-credit scene, with all its hints of future events, done in an ostentatiously gaudy single take. And the overall setup really is intriguing: a world in which everyone of power is as mad as the narrator of Fight Club, all with their own bizarre pathologies.

And in the end, a melodrama about destroying capitalism? Yes please.

Weird Kitties Reviews, Batch Three (The Vorrh, The Goat Variations, Aurora) “Trillions ahead, and trillions ahead of them”: Time’s Arrow, Part II