Not The Last War in Albion (Phonogram) 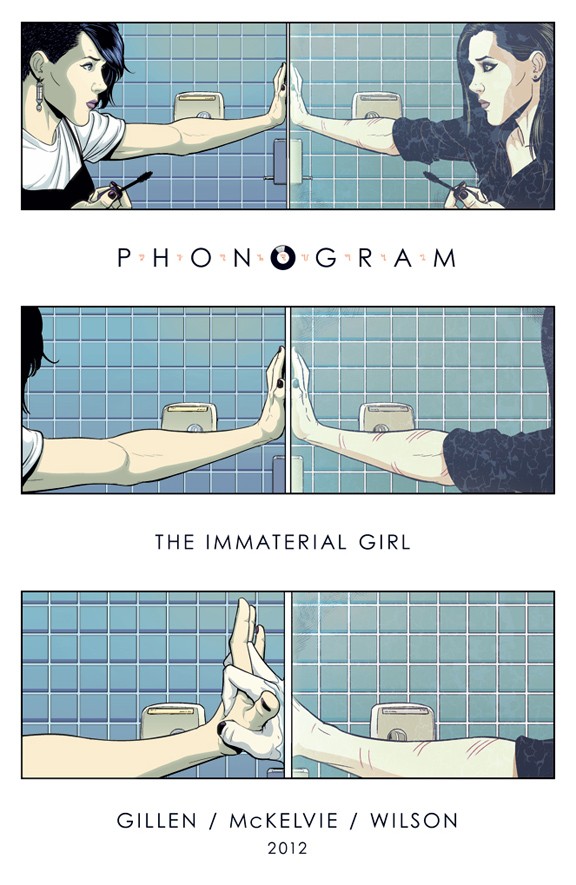 When I cover it in Last War in Albion, I am inevitably going to have to suggest that Phonogram was a magical ritual to murder David Bowie. Part of this will be a straightforward and well-reasoned technical argument based on The Immaterial Girl’s meticulously rendered and devastatingly well-structured invocation of Michael Jackson’s death, and another part will be the fact that Bowie’s cancer diagnosis would have come right around when WicDiv #1 hit, with Lucifer’s death literally coming ten days after the debut of “Sue (Or in a Season of Crime)” (“Sue, the clinic called /The x-ray’s fine / I brought you home,” although for the purposes of Phonogram the lyric you’d want is “Sue, I found your note / That you wrote last night / It can’t be right / You went with him”), and of course a big part is just going to be a big influence-based dig through the primary source material in a slightly self-parodic attempt to factually evaluate Gillen’s claims about Kenickie.

But that’s the content, which is entirely different from the reason I’m going to do this ridiculous but necessary thing, which is simply that in issue #2 of The Immaterial Girl Gillen says, and I quote, that he was “never a fan” of Placebo and that he “trolled their fanbase outrageously back in my evil days” before demonstrating that he’s referring to the present day by calling their debut their best album. And, look, I’m sorry, but there’s a girl named Mink I was trying to impress one year in college who’d sold half her personality to the devil for power (or something like that), and who introduced me to both Placebo and Bowie, and there are loyalties that never die, so Kickstarter backer or no, this does not stand. (Mink went on to marry the lead singer of a goth band, of course.)

Anyway, Meds is their best album, but let’s talk about their cover of “Running Up That Hill,” because it’s brilliant and deserved its overexposure, and also will probably annoy him more. The trick, of course, is that it’s a stupidly audacious choice of songs. Of course you can’t fucking improve on “Running Up That Hill.” It’s “Running Up That Hill.” It is literally the most perfect thing ever recorded. That’s the point. Placebo’s version of it is a desecration. It’s a staggeringly reverential desecration – a point demonstrated by the nine minute live cut, which fades in the ethereal synth line for a decadent minute and four seconds of anticipation before finally dropping the hook before building to a screaming crescendo in which Molko is audibly hurling himself at the very limits of his gender and sexuality, smashing himself bloody upon a prison whose walls are horribly and awfully more than flesh. (Note the addition of “God” before “tell me we both matter,” which slides in almost inadvertently, as though Molko could not stop himself from praying.)

But it’s a desecration never the less. It has to be. This is the same band that executed “Nancy Boy” (on the self-titled album, natch), a preening ode to drug-fueled cruising propelled by Molko’s nasal howl. Begrudge them “Loud Like Love” all you want, and they’ve no place writing a gay prom anthem in 2013, but that leering, seethingly obsequious whine is a weapon, lush and erotic through nothing more or less than the extent to which it will debase itself. And so he turns on an unimpeachable icon. A song he cannot hope to do anything than spoil. He drapes himself lasciviously upon the untouchable with a love and fidelity that is unimpeachable. The song is in constant, screaming agony at its own inadequacy, clawing at its own wrists for shame that it is not Kate Bush, begging the song itself to transform the profane back into the sacred. It’s beautiful. That it’s as hateable as it is haunting is the point. Gillen notes the hint of goth Bowie swagger in Placebo, but like anyone who wasn’t in an American suburban public school in the 90s he doesn’t get what the strange constellation of freaks that centered imperceptibly on Outside-era Bowie meant. (Try the Bowie/Reznor performances of “Reptile” and “Hurt” and you’ll come the closest to getting it. In particular, look at the latter, where Bowie reduces Reznor to an awkwardly sized teenager curled up and singing along to his own song, a blueprint for Johnny Cash taking the song away from him entirely.)

Phonogram is about a lot of things, but one of them is criticism, which makes it either a very hard comic to write about or a very easy one. It’s necessarily a comic about Kieron Gillen’s own transition from being a video game critic to being a comics writer, simply because it’s a comic about magic and those were its literal effects. As a comics critic who occasionally has delusions of writing fiction before I remember, inevitably, that I simply lack the ability to stop writing criticism, this is tough to grapple with, not least because the music upon which Gillen performs his demonstrations of criticism is not music I have any particular attachment to. Which is largely irrelevant to the business of actually reading the comic, but that’s neither here nor there, at least inasmuch as the investment in criticism goes.

It’s not quite fair to say that Phonogram is a critique of criticism, although it’s precisely as unfair as saying that it’s a love letter to it. Gillen’s love of criticism is clear enough, but he holds it at a remove. One of the most fundamental rules of Phonogram is that phonomancy can only really be used to fuck up your life. The knowledge and insight into the inner workings of the human experience that understanding music gives you don’t help you.

The problem is that culture slithers away from you. In Phonogram, music is always more than you bargained for. Every judgment exists to be undermined, always going too far or not far enough, often at the same time. That’s the game of course; criticism is the art of lying about reality just like fiction’s the art of telling the truth with lies. the content is just the technobabble for a story that’s told around it, a tendency demonstrated at careful length back in Rue Britannia, with its lengthy digressions on Britpop subbing in where the explanations of magic usually go in a Hellblazer story.

(Eagle-eyed readers will notice I’ve danced around The Singles Club, presented by Gillen these days as the Player of Games to Rue Britannia’s Consider Phlebas, which is to say the better place to start. This is true on a quality level, but, and I recognize this says a lot about me, I have to say I enjoy the sort of raw indie authenticity of Rue Britannia’s monochrome straightforwardness to the fussy fractal of The Singles Club, which, like Seth Bingo, only has time for you if you acknowledge how clever it is. Which is admittedly very, but so is Rue Britannia, while simultaneously being willing to allow for a lazy reading. In either case, The Immaterial Girl maps cleanly to Use of Weapons: ostentatiously clever and casually brilliant at the same time.)

(As for Jamie McKelvie, he’s never said a bad word about Placebo so far as I know. That said, his Claire/Emily after getting out of the bathtub in Immaterial Girl #6, shivering and scared, is the greatest work of his career to date.)

By the end, of course, the point has become that the actual critical judgments don’t matter. (Magic only needs to make sense to the magician, and even then only enough to get them out of bed in the morning.) As damnations go, of course, criticism’s not a bad one. (Indeed, criticism is lovely; everyone should try it.) The trick’s avoiding the false certainty of resolution, avoiding the thundering certainty that precedes being a dick. (An ending’s just a full stop with ideas above its station.) In Phonogram this is eventually equated to growing up, which is fair enough, (We all take a job with the Adversary eventually.)

I wrote a deliberately and trollingly formless take on Phonogram consisting almost entirely of what I’m confident I won’t want to say when I write about it in Last War in Albion, and did it in a one-night blaze of staying up too late to get it posted the next morning in lieu of Last War in Albion (and to knock off a Patreon obligation) mostly because I have a sneaking suspicion that “Fearful Symmetry,” which I’m starting work on tomorrow, is going to be slow going like “Watchmaker” was and for many of the same reasons.

Phonogram is a Gillen/McKelvie comic – the first Gillen/McKelvie comic, in fact – about the idea that music is magic, which is as straightforward a claim about magic as exists and damn near as staightforward a claim about music. It exists in three volumes: Rue Britannia, their professional comics debut, which is a six-issue black and white Hellblazer pastiche about Britpop; The Singles Club, a seven-issue set of interlocking one-shots telling the story of a single night at a single club; and The Immaterial Girl, which just wrapped on Wednesday and has its trade dropping in March, and which is about things that won’t make a ton of sense if you haven’t read the first two. Thankfully, the first two are available as part of the Humble Image Comics Bundle, which also includes the first volumes of Injection, Trees, and Bitch Planet.

Last War in Albion’s back next week for the backmatter to “Watchmaker.” Whatever will I find to parallel with a discussion of atomic superheroes as gods.