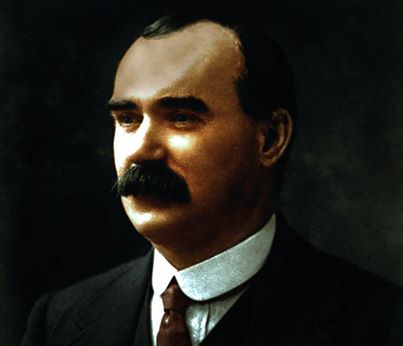 As part of the promised avalanche of Shabcasts, here‘s another.  This time I’m joined by the dulcet tones and clever thoughts of James Murphy of Pex Lives, City of the Dead and (formerly) The Last Exit Show, for a mammoth chat about the Bible, anti-Semitism, Labour, Brexit, the Tories, the May elections and Sadiq Khan… taking in Lee & Herring, Terry Pratchett (I get told off), Stephen King, fame, podcasting, American history, the psychology of Presidents, and Hillsborough along the way.  Trust me, your ears will thank you for subjecting them to this pleasant ordeal.

I didn’t clock the fact that this episode would be going out on the 100th anniversary of the murder of James Connolly – Irish Republican hero and one of the greatest socialists, internationalists and revolutionaries of the 20th century – by the British imperial state, so I failed to raise the topic with James (which would’ve made for interesting listening, and a two-part podcast… because we pushed the envelope as it is).

So here are some quotes instead:

State ownership and control is not necessarily Socialism – if it were, then the Army, the Navy, the Police, the Judges, the Gaolers, the Informers, and the Hangmen, all would all be Socialist functionaries, as they are State officials – but the ownership by the State of all the land and materials for labour, combined with the co-operative control by the workers of such land and materials, would be Socialism.

Under a socialist system every nation will be the supreme arbiter of its own destinies, national and international; will be forced into no alliance against its will, but will have its independence guaranteed and its freedom respected by the enlightened self-interest of the socialist democracy of the world.

The Irishman frees himself from slavery when he realizes the truth that the capitalist system is the most foreign thing in Ireland. The Irish question is a social question. The whole age-long fight of the Irish people against their oppressors resolves itself in the last analysis into a fight for the mastery of the means of life, the sources of production, in Ireland. Who would own and control the land? The people, or the invaders; and if the invaders, which set of them – the most recent swarm of land thieves, or the sons of the thieves of a former generation?

No revolutionary movement is complete without its poetical expression.

We, at least, are not loyal men: we confess to having more respect and honour for the raggedest child of the poorest labourer in Ireland today than for any, even the most virtuous, descendant of the long array of murderers, adulterers and madmen who have sat upon the throne of England.

The great only appear great to us because we are on our knees – let us rise.

And here’s a link to his greatest work, Labour in Irish History

And, once again, here‘s a link to Kit Power’s excellent piece about Hillsborough.

And here’s a link to the podcast I mention, Reading the Bible with Dan.

Jack Graham wrote about Doctor Who and Marxism, often at the same time. These days he co-hosts the I Don't Speak German podcast with Daniel Harper.Support Jack on Patreon.
Comics Reviews (May 11th, 2016) “Thrice burnt, thrice brought forth”: The Collaborator