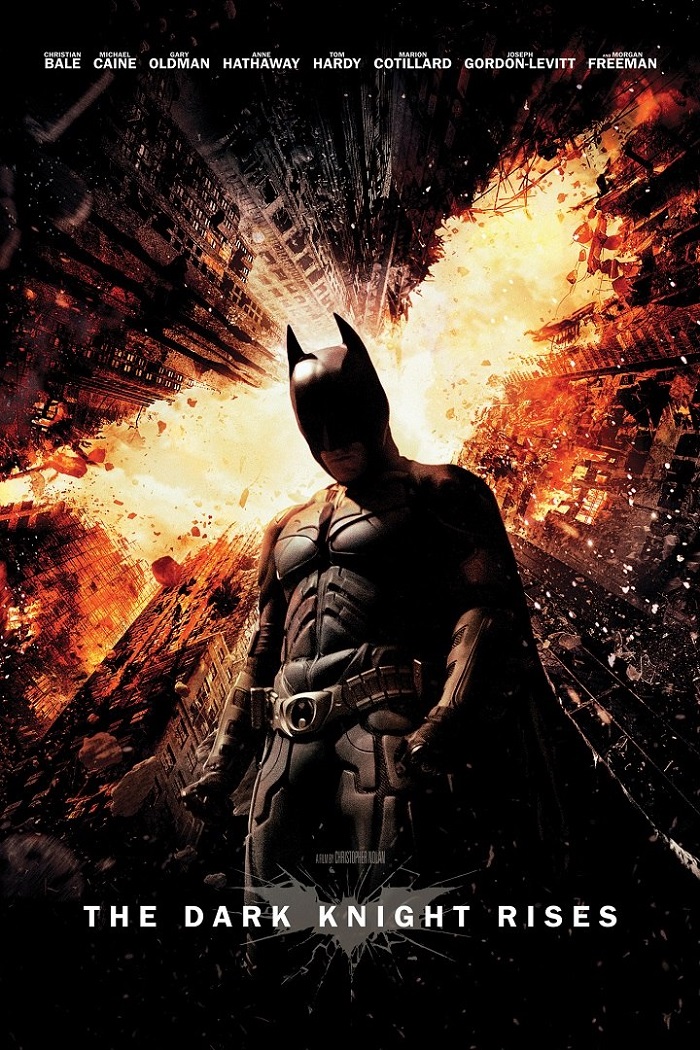 The Dark Knight Rises offers something with no counterpart in Nolan’s career: it’s a hot mess. That is not to say it’s a bad film, and certainly not to say it’s the worst of Nolan’s career (that’s clearly Interstellar). But there is a mad unruliness to it that is utterly uncharacteristic of Nolan’s work. Nolan is, as I’ve said before, an enormously fussy director. His work thrives on constantly trumpeting his presence as an auteur, inviting the audience to feel smart for keeping up with him. This is not inherently a bad thing – it’s nothing that isn’t true of Steven Moffat, for instance. It’s just how Nolan rolls. When it works, as with The Prestige, the result is a gripping puzzle box. When it doesn’t, as with Inception or Interstellar, you get something more akin to a stupid person’s idea of what a smart movie is like. But The Dark Knight Rises is neither of these things. Instead it’s a film Nolan simply loses control of – that becomes a sprawling tangle of competing ambitions that doesn’t know what it wants to do even as, at any given moment, it’s doing it with characteristic hyper-focus.

To some extent this is visible just from its sense of what comics it’s adapting. Sure, Batman Begins had a vague relationship with Year One and The Dark Knight is in some tangential sense based on The Long Halloween, but for the most part they were built out of bespoke parts. The Dark Knight Rises, on the other hand, is mashing together The Dark Knight Returns with Knightfall. These already two borderline incompatible works, offering two very different accounts of Batman’s limits. Nolan, however, combines them while also including Catwoman’s plot from Year One, the introduction of Talia al Ghul, Robin, and the lingering plot threads from the other two parts of the trilogy. This is nuts. These are not parts that have any natural reason to go together – instead it’s as though Nolan, out of clear-cut ideas on what to do with his third film, just raided all the remaining bits of the mythos that sounded interesting and put them in a blender.

The result is oddly satisfying. It’s not quite that Nolan is working outside of his comfort zone – it’s nearly impossible to imagine him doing a comedy, or even something that can fairly be described a small and intimate. Rather, it’s a strange combination of Nolan letting his hair down and having something to prove. The sense is that the need to top himself twice over has finally put a bit of pressure on him, and he’s not entirely confident of how to handle it, so is spreading his bets. But his attitude towards this is pleasantly relaxed – as though he’s just letting this film happen as his big obligation between Inception and Interstellar. And as a result, it’s a better film than either, because another way of putting that is that Nolan recognizes the impossible scope of this movie and so has decided to actually have some fun with it.…

END_OF_DOCUMENT_TOKEN_TO_BE_REPLACED 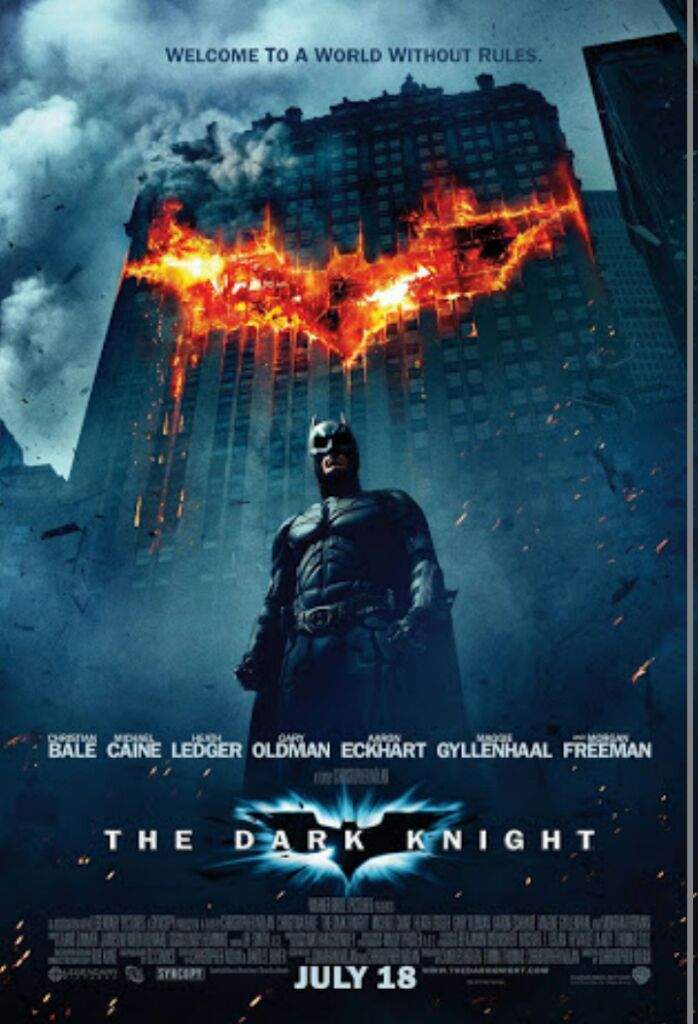 It seems silly to start anywhere besides the Joker. We’ll set aside the cynical but not entirely unfounded question of whether the performance would be as celebrated as it is were it not for Heath Ledger’s untimely death and the ghoulish speculation (since refuted) that the psychological intensity of the role was a cause. Sure, it’s tough to imagine a Batman film winning an acting Oscar under less tragic circumstances, but that’s in no way what’s interesting here. What’s interesting is that Ledger and Nolan took the most oversignified character in Batman mythos (and yes, of course I’m including the big rodent himself) and offered a game-changing take on him. The hunched, disheveled figure with a Glasgow smile is a new angle, skewing the Joker towards a materialism that is generally precisely what’s discarded in other efforts to make him more grandiosely crazy. Ledger and Nolan offered a new way for the Joker to be.

By some margin the least interesting parts of this are the most often remarked upon. Yes, Ledger’s schlubby maniac was an easier fit for a certain strain of geek masculinity than the more overtly queer portrayals that came before him. But frankly, anybody who needed reassurance that the Joker’s makeup was “like warpaint” before they’d dress as him for Halloween needs to be fired into the sun. “Why so serious” is a great marketing line, but it’s a trivial part of the character’s personality – a line he uses in one of the mutually contradictory origin stories he gives – and reducing Ledger’s take to his leering transgressiveness is how you get Jared Leto’s performance in Suicide Squad.

To understand what’s going on with Ledger’s Joker, it’s necessary to understand the basic oversignification of the character. For that, let’s turn fleetingly to what is both the best comic story written about him and the low point of Alan Moore’s career, Batman: The Killing Joke. (This being where Nolan’s “multiple contradictory origins” idea originates.) For all that Moore crafts a typically symbolically rich take on the Joker, the big problem with the story, as Moore readily admits, is that he didn’t define the Joker as anything other than Batman’s archnemesis. He represents nothing save for a particular limit point for Batman – an irreducible reality of his mythos interesting for few reasons other than that homicidal clowns with good visual design are kinda cool.

This is not what the Joker in The Dark Knight is doing, although it’s easy to miss that fact. The centrist liberalism that is the default setting of most popular culture means that we’re most used to villains who are cuddly versions of fascism: Voldemort, the Empire, the Daleks, etc. It’s easy to make too much of this – the defanged fascists of popular culture villainy are generally so cartoonishly that if they have any political effect, it’s to blind us to fascists that don’t literally call themselves Death Eaters, have the Imperial March as their theme song, or shriek “EXTERMINATE” a lot.…

END_OF_DOCUMENT_TOKEN_TO_BE_REPLACED 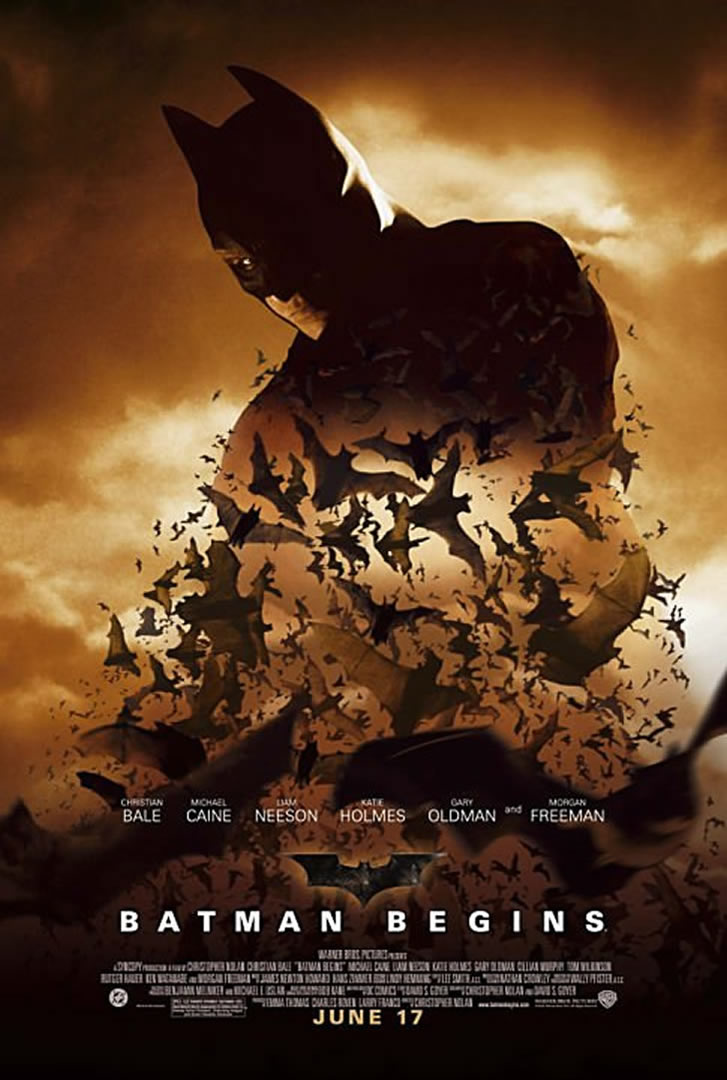 It may be an accurately named trilogy, but its edges are both fuzzy. The Dark Knight Rises ends by gesturing forwards to an unrealized draft of DC’s film aspirations. Batman Begins, on the other hand, is inexorably tethered to the Burton/Schumacher films its title declares its separation from. Batman begins because his franchise had been driven into the ground by Batman and Robin eight years earlier. The choice of villains is perhaps the clearest remnant of this – two villains who had not been used in the previous series, including the Scarecrow, who was going to be the villain of a fifth Batman film ever since it was going to be directed by Joel Schumacher and called Batman Unchained. Even Hans Zimmer’s score interpolates Danny Elfman’s.

Even considered purely within terms of the Dark Knight Trilogy, Batman Begins is odd. Again, the title is a clue – it’s the one part of the trilogy not to have the phrase “Dark Knight” in it. But more to the point, it’s the only film in the trilogy to be directed by Christopher Nolan, promising young director coming off of Memento and Insomnia as opposed to Christopher Nolan, director of major blockbusters. And this shows. Batman Begins is by some margin the smallest of the three films. Its action sequences are considerably more restrained compared to the other two, still unburdened by the pressures of perpetually topping the previous iteration. It’s also much more rooted in the classic superhero blockbuster structure where people end scenes with lame quips. (Not even Gary Oldman can make “I’ve gotta get me one of those” work.)

And so Nolan gets a relatively blank slate to define his Batman on – one neither colored by his own brand nor by anything save for “not Batman and Robin.” And Nolan deftly avoids the one way in which that could pigeonhole him, reacting against the quasi-Adam West aesthetics of Schumacher’s film by emphasizing “dark and gritty” at the expense of everything else. Nolan’s film is comparatively dark, yes, but he avoids the Frank Miller style histrionics that one might expect from that brief. Yes, the film nicks a character and a couple of plot points from Year One, but it’s manifestly not an adaptation of that comic. Indeed, while one suspects Nolan is not enough of a comics geek to intend it, the use of Carmine Falcone as a throwaway villain defeated by the Scarecrow, who is himself not actually the film’s big bad invites reading the film as a repudiation of Miller’s puerile maturity.

Instead, Nolan’s film unfolds with a sort of ruthless competence. 2005 was, generally speaking, a good year for this. The modern superhero book had been successfully kicked off with Bryan Singer’s 2000 X-Men film, but we were still three years away from the Marvel assembly line starting to roll. Competence was desired, but as Daredevil had shown two years earlier, still nowhere near being able to be taken for granted. And so much of Nolan’s work – which he was exquisitely suited to – came down to offering a detail-oriented and broadly serious take on Batman.…