Owing to a decided – and entirely understandable – lack of enthusiasm for the project from anyone else, I embarked on a solo commentary on the 1984 movie version of Charles Dickens’ A Christmas Carol, starring George C. Scott as Scrooge.  Luckily, I’m quite capable of wittering on for 90 minutes unassisted.
So, here it is… a Christmas… treat for you?  I guess?
The movie is on YouTube should you want to watchalong with me.
Obviously, a commentary isn’t an ideal way to analyse a text, so I left a lot of things out that I wanted to talk about.  So you may be getting more on this.  I’ve already written about it in passing here.
WWA did another CtR on a Christmas movie (though I understand this is a vexed question now) here.
Meanwhile, thanks everyone for reading my stuff this year.  And thanks for being such a great community.  And thanks to all those who’ve promoted my stuff by tweeting, retweeting, etc.  And special thanks to my lovely patrons.  They got advance access to this podcast.  If that seems like a reward to you, you might consider joining their number.
…

END_OF_DOCUMENT_TOKEN_TO_BE_REPLACED 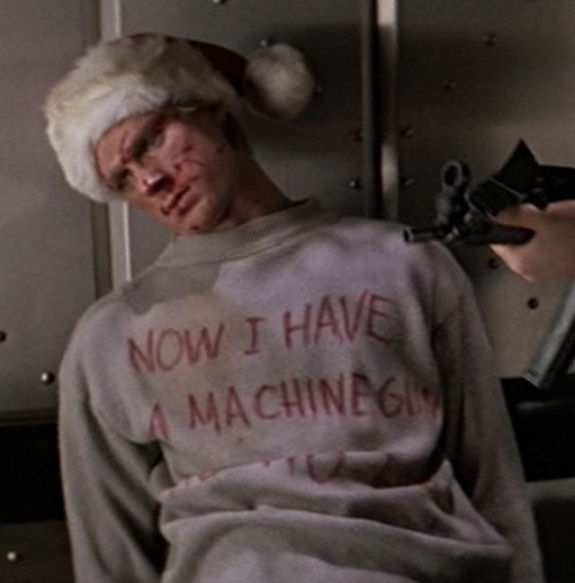 Take time off from wading through the flooded ruins of your home and join the entire ‘inner party’ (as it were) of Eruditorum Press – Holly, myself, James, Jane, Kevin and Phil – for Shabcast 14, a massive festive blather-session.  (Anna was invited, but was too tired from doing little things like, y’know, fixing the site.)

Like any office Christmas ‘do’ there will be simmering resentments and blazing rows, the awkward office joker will embarrass everyone, somebody will get spannered and photocopy their arse (or, these days, scan it and email it to people I suppose), the boss will be unconvincingly jovial with staff who can’t relax while he’s around, two people will sneak off for a tryst in an empty office, and the whole thing will be interrupted by terrorists led by Alan Rickman.

It’s undoubtedly the finest piece of Christmas-related media you’re likely to experience in the next couple of days.

And have a pleasant end of December.

END_OF_DOCUMENT_TOKEN_TO_BE_REPLACED

To me, the most striking thing about the racist Christmas card circulated by the British National Party (or the Keystone Stormtroopers, as I like to call them), is how utterly mainstream it looks.

There is clearly a racist message here because

a) it’s being circulated by a racist party of fascist Nazi racist racists,

b) because of the oh-so-clever hidden subtext of the phrase ‘white Christmas’ that Cyclops/Fuhrer Dickibegyourpardonnick Griffin’s reichschancellory full of political geniuses have cryptically woven into it.

But, as Metro have pointed out, it’s an altered stock image, also used by thoroughly mainstream publications.

The Aryan child – pale and blonde and blue-eyed – is still the vanilla standard of beauty and innocence in the aesthetic system that capitalism calls Christmas.  Mainstream adverts and cards will engage in tokenism so as to simperingly hook in with sentimenal one-world platitudes, and sell to more than just white people, but non-white faces are still the variety sprinkled around the white standard.

It’s not the young model’s fault, of course.  She’s just peddled her own image in a system of bodily commodification (as we all must peddle ourselves, one way or another, in order to get by) only to find her image purchased and used by a bunch of evil, twisted, shambolic fascist pisswizards.

(BTW, my derision may reflect the current state of the BNP, but I don’t mean to dismiss them as an archaic or dormant threat.  They’re still Nazi filth and they still hurt people.)…

END_OF_DOCUMENT_TOKEN_TO_BE_REPLACED

It’s getting near Christmas.  Christmas means Dickens.  Doctor Who has ‘done’ Dickens twice in recent years… on both occasions, the show has travestied Dickens’ most famous Christmas story A Christmas Carol.  Last year we were given that Moffat-penned obscenity that shared its title.  He transmuted the tale into a gleefully cynical celebration of hubris, casual sexism, complacency and hypocrisy.  But Moffat was following a trail already blazed.

Back in 2005, Mark Gatiss riffed on the same story (which is about a selfish man who is made to realise that he owes the world a debt, only to find himself transformed by that knowledge) and turned it into a parable about how helping the apparently needy is dangerous folly stemming from thoughtless guilt… because the apparently needy (even ‘foreign’ refugees, running from the devastating effects of a war they didn’t start) will probably want to swamp you and steal your world.

Once I’d realised (with help from others more immediately perceptive than myself) what ‘The Unquiet Dead’ was actually about, I became very critical of it.  However… as time passes… I begin to think I’ve been overly critical of Gatiss.  Perhaps even a tad unfair to him.

Don’t get me wrong, I still loathe ‘The Unquiet Dead’ (together with just about everything else Gatiss has ever done in his career, to be honest), but I think I’ve been on iffy ground when I’ve implied that his tale of gas sprites in Victorian Cardiff went against the spirit of Dickens.  Yes, ‘The Unquiet Dead’ directly contradicts the stated message of A Christmas Carol, and uses Dickens to do it, but Dickens himself did that too.

In response to the eruption of revolt against Britain’s unremittingly cynical, cruel and ferocious imperial domination of India (the event that the Victorians dubbed ‘The Indian Mutiny’) Dickens collaborated with Wilkie Collins on a story called ‘The Perils of Certain English Prisoners’.  It’s a classic imperialist text.  It is a fictional story about pirates and treacherous natives in Belize, but the story is unavoidably about India.  It makes the imperialists into the victims of the natives, as such texts always do.  It belittles a character who is probably meant to refer to Lord Canning (Governor of India during the revolt) who earned himself the contemptuous nickname of ‘Clemency Canning’ for daring to suggest that some discrimination should be used in reprisals, rather than the indiscriminate and bestial torture and mass slaughter actually employed by British troops.

“I wish I were Commander in Chief in India,” Dickens told a correspondent, “I should do my utmost to exterminate the Race upon whom the stain of the late cruelties rested… [he refers to massacres committed by the rebels… in response to British massacres that predated and dwarfed them] and raze it off the face of the Earth.”

We can take into account the fact that he was responding to very one-sided media coverage and government accounts.  Lord Palmerston had written a popular pamphlet in which he detailed atrocities of the rebels… needless to say he didn’t contextualise them with details of British imperial cynicism, ruthlessness, murder and torture.…

END_OF_DOCUMENT_TOKEN_TO_BE_REPLACED

Ultimately, this film is only superficially about a struggle for the crown. The crown, the lands, the money, the power… these are the playing pieces in a game that is really about a family eating itself alive over lost love, sour love, delusional love, destructive love and the lack of love. When Kate Hepburn’s Eleanor says that “we” are the cause of history, she doesn’t mean royalty, she means we humans. At the season of love, as she watches her family attack itself, and watches herself join in, she wonders aloud why they can’t just love each other. “We have so much to love each other for,” she says, “we have such possibilities.”

It may be Albee-lite (and Anouilh-liter) but it’s still amazing, moving stuff, entirely uncontaminated by sentimentality… and guaranteed to put your own family squabbles into some kind of perspective.

Stephen Poliakoff’s masterpiece (from before he turned into an utter wanker) begins with Christmas lights. Christmas is something happening in the outside world. Within the peculiar space of the Falham Photo Library, time works differently, as does value and history and emotion. The modern world (in the form of an American corporation) buys this little island and starts to invade it, planning to sell it off and turn it into some piffling corporate ballsup… their interest in the gigantic library of old photos being precisely zero.…

END_OF_DOCUMENT_TOKEN_TO_BE_REPLACED

The new leader of the War Lords, The War Ed, delivered his first speech as leader today, winning muted and embarassed applause when he said that “we have to face up to the fact that, in retrospect, the War Games were probably, well, er… perhaps, maybe, not all that totally a good idea… umm, sort of?”

His brother, The War Dave, looked all pouty and crosspatch and was seen to ask the senior War Politician sat next to him, The War Woman, why she was clapping when she voted for the War Games. “I’m clapping because I don’t want the Time Lords to dematerialise me,” she said, earning herself a curled lip and sneering glare from The War Dave.

Later today, The War Dave announced that he would be “stepping back from frontline War Politics” (apparently unconscious of the queasy irony of suggesting that he’d ever been on the “frontline” of anything, unlike loads of ordinary people that he helped send to kill and die) “to concentrate on sitting in the corner with my arms folded, sulking.”…