The Birdwatcher’s Guide to Atrocity Review 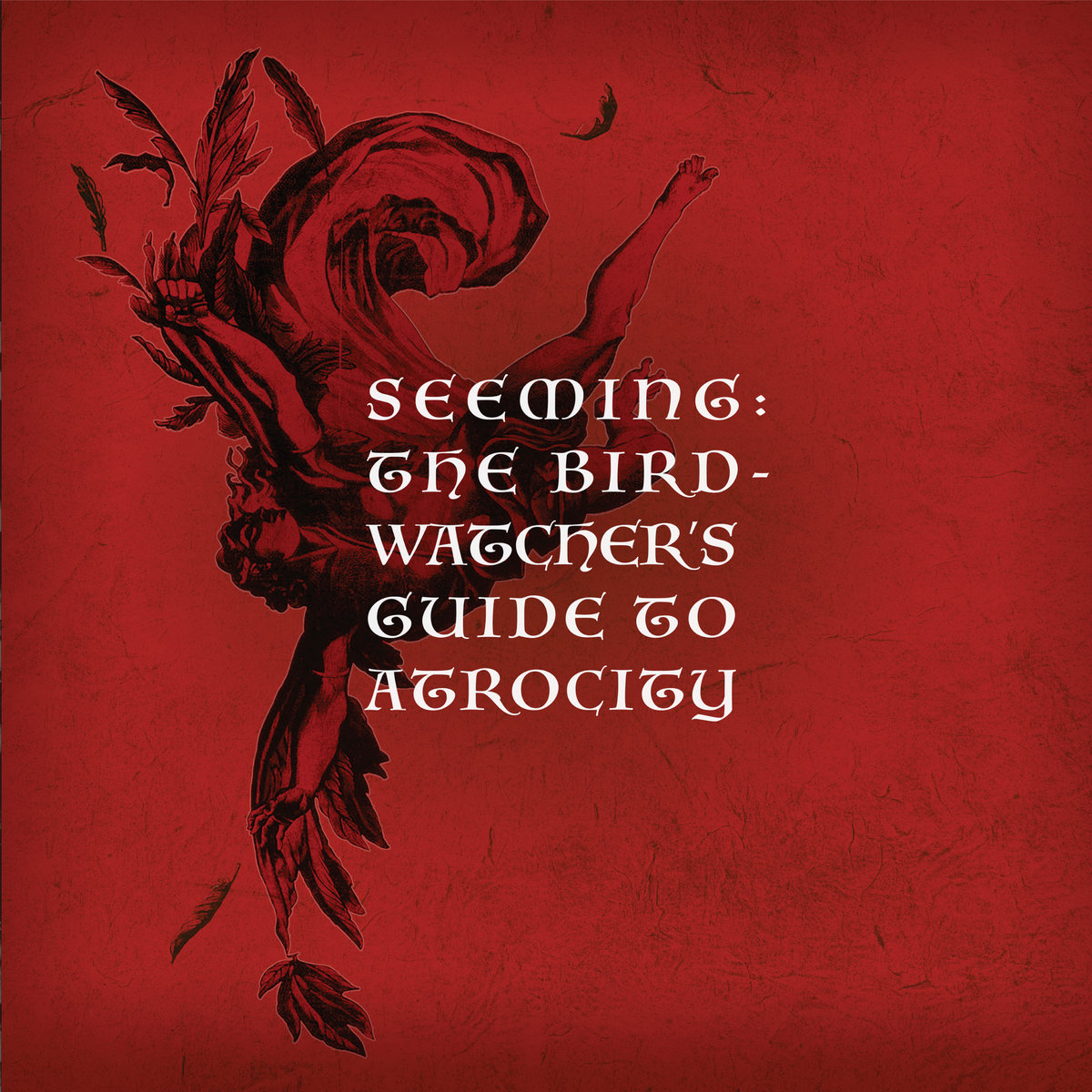 It is not news that Alex is one of my most beloved friends in the world. Nor is it news that his band, Seeming, is my favorite band. These things are not separable. And as with all of his albums, this is one I saw coming together, giving my opinions on demos, agitating in favor of songs when Alex’s faith in them faltered, and generally giving my input and perspective, just as Alex has weighed in on countless bits of Last War in Albion and Cyberpunk: The Future That Was. I care too much about his work, in the wonderful, heady way that one cares about art that one truly loves. Anyway, he has a new album coming out on Friday,The Birdwatcher’s Guide to the Apocalypse. It is of course brilliant. You should buy it. At the very least, you should be sure to swing by your streaming service of choice and give it a listen. Four tracks are up now, the other six on Friday. Let’s talk about it some.

From day one, when talking about how he’d follow Sol, Alex said he was going to avoid going bigger, recognizing that simply always doubling down on epic grandeur was a trap. The third Seeming album, he was very clear, had to be smaller, tighter, and more intimate. And then, for quite a while… nothing. He didn’t really write any new songs. A few here and there, generally clever and interesting, but generally not so much small as lightweight, sounding more like Alex playing than Alex working on the next Seeming album. Which, fair enough. Sol is the sort of album you do that after.

And then one day, around two years ago, while I was having a bit of a night, he sent me something. Just a verse and a chorus. And as I always do when I get a message with a Dropbox link from Alex, I put down what I was doing and got myself to a decent speaker. And I started to listen. “Write the song you need to hear,” Alex sang. “And when you’ve done it show me how.” It was immediately interesting—urgent yet heartfelt. “Where I walked the day Amelia died is where you’ll find me now.”

And I broke. Amelia was Alex’s utterly beloved cat. (All of Alex’s cats are beloved.He has an EP of goofy songs about cats that you will never, ever get to hear, and it is the best thing he has ever done.) His wife had been making an idle comment about how churches should give out kitties, then hearing a cry and pulling her out from the inside of a truck’s wheelwell, a cat manifested from will and magic alone. I first cat-sit her all the way back in Florida during my PhD program after Alex, in a stunning and blessed coincidence, got a job at UF for a few years. Ithaca was the third city I did it in. She died just after Halloween my first year here. I was at their house the night before. We sat quietly, somberly, watching Twin Peaks and handing out candy to the couple of people who came by as she sat on a heated blanket, too sick and weak to move anymore. After she passed, I lit my altar and prayed to any god that would listen to give her an easy, gentle passage into whatever was next for her, because Alex is family and that is simply what you do.

And then the song continued, dreaming of gutting billionaires, and offering the equally gutting “for a flash I’d seen the hope I peddled in The White Beyond,” and I realized that this was a song about my best friend being profoundly not OK. And I wrote back, “congratulations on starting the next Seeming album.”

That song is “Go Small,” and it’s track two. I listened to an early demo, sitting very still, crying softly, as I finished writing my review of Rosa, still early enough in the Chibnall era to be hurt by its moral cowardice. I still put it on when I feel sad and small and broken.

Fuck, I’m hundreds of words into this and I’ve talked about literally one song. This is how Seeming goes for me. Especially this album. If Sol was the quiet soundtrack to Neoreaction a Basilisk, this was simply the quiet soundtrack to two years of my life. It is an album I lived to. I first got the final version two days before I moved house in the middle of a fucking pandemic after I politely asked Alex if he’d leak the final version so that I could play it as moving music. I listened to it on something like a three repeat loop as I finished packing.

Right. Let’s talk about the album as a whole. As I said, it’s a deliberately smaller, more intimate piece. It’s probably fair to call it an album, in part, about living under Trump—“Go Small” does, after all, come deliciously close to violating Code Title 18, Section 871 of federal law. I said once that the worst part of Trump was going to be the allostatic load, and this is in many ways an album about that—an album about getting through. It is defiant, angry, and wounded.

But small for a Seeming album is still routinely ostentatious in its scope. “The Flood Comes For You” is a focused blast imagining climatological apocalypse as rapturous murder weapon. “End Studies” is an apocalypse fetishizing stomper of the sort one expects from Seeming. “Reality is Afraid” is a big queer anthem literally targeting consensus reality itself. This is still an album about cosmically huge ideas, its focus on trying to imagine impossibly broad and transformative visions of posthumanism. But these visions routinely resolve down into the short, sharp punch of the everyday. The second verse of “Permanent,” which is too breathtaking and awful a turn to spoil in a review, is apropos here.

But for me the thing to point to that perhaps most perfectly sums up what Alex is doing here is the bridge to “Remember to Breathe.” I once speculated to Alex that there has never been a good anti-suicide song. Here he has proven me wrong. But the line that kills me—that I have already sobbed to with impossible fury at one of the absolute lowest moments of my life—comes in the middle: “Like a tall tree I am pining / to be taken out by the lightning / strike me / I dare you / I dare you / Heaven hear me.” I don’t think anything else has captured the specific way my suicidal ideation manifests on the these days rare occasions that it does: screaming at the gods, daring and demanding their wrath, throat raw and hands outstretched. And then, a couple lines later, at the start of the next verse: “I didn’t do it today cause I don’t want you to have to deal with the cops.” That switch in register, the abrupt pulling back to the piercing immediacy of the everyday, is a new weapon in Alex’s arsenal, and he deploys it here with devastating effectiveness.

This is not an easy time to be the sort of person who imagines a better world, or who gets angry about the horrors of the one we live in. There’s nearly an infinite amount to be angry about, and the most painfully meager supply of things to hold on to for any supply of hope. The Birdwatcher’s Guide to Atrocity helps. It is, as its description says, ten ways of making it to tomorrow. They’re good and necessary ways. You should listen to them. They’re going to help.

Hm. No. I’m not selling this the way it needs to. I’m not being true to what the album is and what it does. I keep almost telling the story of what this album is to me and not quite doing it. Let’s try again.

A few months ago I had a surgery consult. It went badly. For incredibly petty and bullshit reasons, I turned out not to be a viable candidate for surgery. At best, fixing this would be a years long process, with its own pile of mental health agonies. More likely, it just means I don’t get to have surgery. I was heartbroken. My dysphoria was through the roof. I didn’t want to crawl out of my skin—I wanted to rip it off. I wanted to shred my body apart. It wasn’t even suicidal ideation. I didn’t want to die. I just wanted to not exist in this stupid, cruel, capricious mode of being. I didn’t want to be flesh with all its awful, pointless, and fundamentally wrong form.

That was the day I referred to above with “Remember to Breathe.” This was the album I put on in the car on the way home, sobbing and screaming, more hurt than I can remember ever having been. It was the album I played as I sat alone in my room a few nights later, my altar lit, any and all gods who would listen called to account. I stalked around the darkened room and danced, sang, and screamed. And by the time the final track, in all its mad and destructive hope, gave way to the peal of birdsong with which the album ends, I had found some measure of peace. I was okay. Not okay in the sense of nothing being wrong, or of not hurting, and certainly not of being good. Just… okay. I was bac in the fight. The world had returned to an acceptable balance—a hear and now from which to make my stand.

In the months since a fucking pandemic washed over the world and everything went to complete fucking hell, I’ve come to a newfound degree of certainty in my politics, identifying actively as an anarchist. For me, at least, what that means is putting aside the question of how to save the world, or of what should be done in any generalized case. Instead, it means building the world I want as best I can, here and now, out of what I have available, and without compromise. This has been the ethos as I go deeper into local eating, trying to move as close to 100% of my food consumption to products grown by small farmers within my community. It’s been the ethos as I build my queer and polyamorous family, as I adopt Christine, as I manage the family’s direct action budget every month to support protesters, bail funds, mutual aid groups, black trans crowdfunds. And it’s been the ethos as I work, operating as an independent critic funded by nothing beyond the direct goodwill of her readership, completely free to write about what I want from the perspective I want. I’m living the life I want to be, as justly and equitably as I can.

I think it’s almost certainly the album a lot of you need to hear right now. It’s certainly been the one I have.

The Birdwatcher’s Guide to Atrocity is out on August 21st.

The Future That Was: The Future is Born (A Triptych Moment) IDSG Ep61 – Eric Weinstein, Part 1