The Flowers in the Dustbin (Super Mario 64) 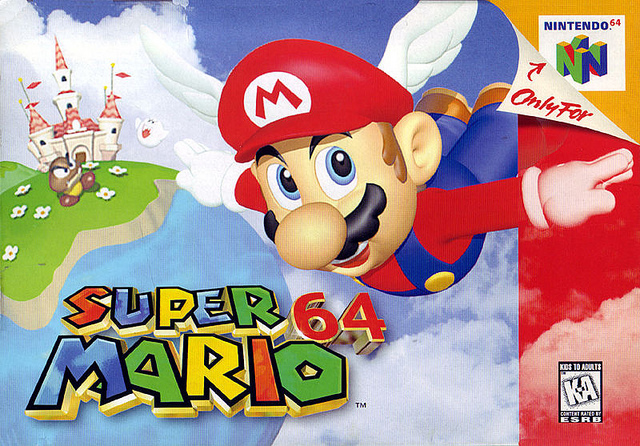 No comics reviews this week. I just can’t. We’ll see about next week when we get there, but I was thinking of winding down the feature anyway, so peg your expectations accordingly. Instead, here’s this week’s Super Nintendo Project.

The future arrived in late September 1996, untethered to any major gift-giving occasion. My assumption in hindsight is that my mother, giddily triumphant after scoring one on the sly and apparently correct logic that Toy Works was still a place that would get a shipment but was not a place where they’d sell out in thirty seconds, couldn’t resist giving it to me immediately. It seems as though I must have known the Nintendo 64 was coming, just because it’s hard to imagine myself as a person who didn’t know things like that a new Nintendo console was coming out, but I honestly can’t even remember a trace of anticipation for the future. Perhaps that’s just where I was in late 1996. Certainly it was something of a low point for me, as adolescent depression’s teeth sunk in deepest and my academic performance began to degrade in the face of a simple and blunt inability to drag myself through page after page of rote busywork.

So it’s perhaps not a surprise that I was at the time unimpressed by the future. But oh boy was I. I beat Super Mario 64, but my desire to go back and collect further stars was essentially nonexistent. My objections were numerous and diffuse. I saw the “hunt for six stars in a level” schtick as little more than flagrant cover for the fact that there weren’t actually very many levels in the game, found the camera thoroughly unsatisfying, and hated holding the weird M-shaped controller by the middle and right prongs.

Most, though not all of this, was unfair, at least as a judgment of the future, in that it amounted to peculiarities of the early-version tech involved in Super Mario 64. Yes, the multiple stars per level were a workaround to deal with the fact that the cartridge could only hold so many of of the big 3D levels, but with subsequent games in the 3D star-hunt format this restriction loosened, and levels started getting the number of stars they could interestingly fit instead of six come hell or high water. The camera, likewise, gradually improved its basic AI, and the eventual switch away from the four-button C-Pad of the Nintendo 64 towards cameras controlled by a second analog stick took away most of the annoyance involved in Super Mario 64. Likewise the controller design, rooted in an understandable but still fundamentally erroneous guess that the D-Pad would remain the primary control mechanism for most games, was subsequently ditched, with future controllers, whether Nintendo’s or not, positioning the analog stick in more ergonomically pleasant locations.

(A side note on the multiple stars per level. On the one hand Super Mario 64 is focused on the search for a singular and defining object – a golden star around which entire worlds are organized. On the other, the need to reuse levels for multiple stars means that the primary focus of the game to the perpetual re-exploration and re-excavation of territory. Indeed, the fact that the game is set at the castle, a place that pre-exists the series, means that the entire game is structured as an archaeological excavation even as it looks into the future.)

But then again, it’s not as though my reaction to Super Mario 64 was the norm. In practice the game was widely beloved, and while certainly not solely responsible for the rise of the 3D action-exploration genre, it shares the same role in that genre’s history that Super Mario Bros. did for the side-scroller, a sort of genre patriarch from which countless conceptual geneologies burst.

In fact, the games have an odd parallelism in my own experience. I first played Super Mario Bros. on my uncle’s NES while visiting my grandmother. I’m not certain when this was – I suspect I was no more than five, and very probably a bit younger.  I remember finding the game intensely frustrating – I don’t think I figured out the importance of running, nor, for that matter, what the fire flower did. (I remember it taking a while to discover that the flower made it so that the button I had previously thought did nothing caused Mario to throw a little ball, and not finding any obvious purpose for the ball during my first time playing it.) These can fairly be described as my errors and not the game’s, which I don’t think is quite as true of Super Mario 64, but there’s still an underlying reminder that a groundbreaking game that pioneers a new style of gameplay is fundamentally going to be a rough and imperfect thing.

But in some ways my memories of Super Mario 64 at fourteen are much stranger to me than those of a clumsy five-year-old not quite instinctively getting Super Mario Bros. The latter is simply a product of youth. But my misapprehension of the future is something that fits smoothly into the Super Nintendo era in which Super Mario 64 is embedded, if not quite belonging. If Super Mario World and (of all things) Frogger represent one axis along which this project runs (though Frogger won’t get an entry), Super Mario Bros. and Super Mario 64 represent another – a pair of ghosts represented only by implication that nevertheless perfectly frame the historical moment it represents.

(Speaking of ghosts, it is worth remarking briefly on the fact that the rounded top of the Nintendo 64 cartridge gives it a distinctly tomblike appearance, especially when sticking out of a top-loading console. This would be a minor detail were it not for the peculiar nature of video game spaces in that they are conjured into existence anew each time the game is played and destroyed. A fitting memento mori. And yet more questions about this peculiar nature of the game remain…)

A final survey, then, of major figures in the story – a handful of snapshots of the future they recede into from here, marking the liminal space between the story and its closing credits.

The Nintendo 64 was ultimately undone by the decision to stick with cartridges. The higher cost of production and smaller storage space made it impossible to port many games to the system (Final Fantasy VII being the most high-profile miss), the release schedule dried up, and Nintendo found itself relying almost entirely on its first-party games. These were, of course, still some of the best games around, but this wasn’t enough, and the system ultimately fell behind the Playstation. Subsequent generations were by and large a mixed bag – the Wii did well on the strength of its motion controls (though fell off badly later in the generation), while the WiiU and Gamecube were essentially busts. In all three cases, the reliance on first-party games that characterized the Nintendo 64 continued. And while the company dominated the handheld market until the iPhone cut that segment off at the knees, the period where “video games” and “Nintendo games” were culturally synonymous was over forever.

Sega had an even rougher go of subsequent generations than Nintendo, with both the Saturn and the Dreamcast faltering in the market, the former because of Sony’s deft maneuvering, the latter after their “get to market first” strategy failed to see off the ridiculous juggernaut that was the PS2 or Microsoft’s well-funded intervention in the market. Eventually they retreated to becoming a software company instead of a hardware company and basically making Sonic the Hedgehog games for Nintendo systems, with the inevitable synthesis of the dialectic coming in 2007 with Mario and Sonic at the Olympic Games, although perhaps the real resolution came a year later when Sonic showed up in Super Smash Bros. Brawl.

Sony, for its part, obviously became the new king, and while they emerged from the Playstation 3/XBox 360/Wii generation bruised, they successfully reasserted themselves with the PS4, and seem as set to continue at the top as anything does in this godforsaken industry.

Toxic masculinity continued apace within video game culture, producing minor scandals here and there before horrifically exploding in Gamergate in August of 2014. Gamergate was subsequently destroyed in the course of a magical ritual, although this should not be mistaken for the elimination of toxic masculinity in the general case, as demonstrated by the Presidential election a week before the ritual’s completion.

Is there some secret history where this turned out differently? Where I kept my high school grades on track, landed a more nominally prestigious undergraduate institution, securing the chain of names on diplomas that is the only actual path to success in my originally chosen field of academia? Does the history of video games play out differently in this world? Is there still Gamergate? Or was this what was always waiting for me, every word of this essay and every fragment of its context as good as written the moment in 1996 that I slid the cartridge into the slot and powered on the future.