The One Word Test 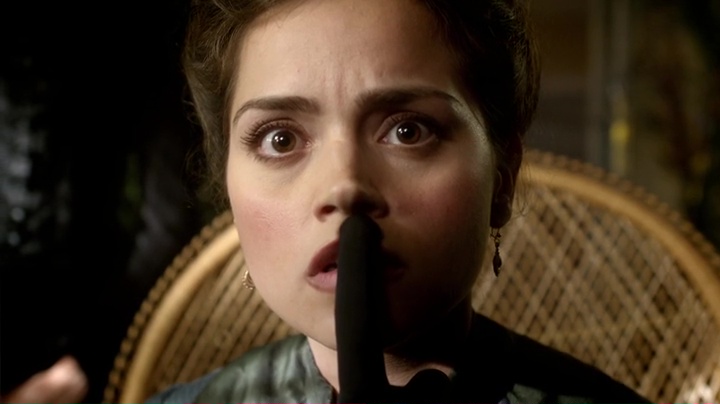 Not sure how we failed to post this yesterday morning. Sorry. -Phil

The following is an essay that will appear in 101 Claras to See, a charity anthology edited by Caitlin Smith.  The book will feature essays, art, and fic, all celebrating the character of Clara Oswald from Doctor Who and the fandom that’s grown around her, including contributions from both Phil and Jill.  The proceeds will help the One to One Children’s Fund.

It is a game of wits, of intelligence, of one’s ability to manipulate words. To play, to win, one must understand the nature not just of stories, but of conversation, of dialectic… of alchemy.  The One Word Test demonstrates just how much Clara understands the nature of storytelling, not to mention the nature of so many underlying principles.

The game is played in a greenhouse – a kind of Garden, complete with chirping birds (one of Clara’s symbols). This is an inversion – a warm place in the middle of winter, a place of life, while outside the world slumbers in its annual death. This is an important alchemical principal, the union of opposites, and the power of negative space (the reversal of polarity, so to speak).  Indeed, the entire scene is a study in contradiction. Even Strax’s lines that open the scene (“Do not attempt to escape, or you will obliterated. May I take your coat?”) revel in the juxtaposition of violence and etiquette.

Vastra sits in the larger of two wicker chairs: she is in the dominant position, and acts as a gatekeeper to the Doctor. The chair is large enough to form a halo around her. Clara sits in the smaller chair, and is not haloed; she has yet to realize her full potential.  The wicker of her chair is simpler than that of Vastra’s chair, with diagonal cross-hatching that resembles Oswin’s actual room at the Dalek Asylum.

VASTRA: There are two refreshments in your world the color of red wine. This is not red wine.

It’s interesting how the Test begins – before Jenny explains the rules, we get this: Jenny delivering a single word in the imperative (not to mention a Buddhist meme), and Vastra invoking the principle of Negative Space within the context of a dualism – the heart of contradiction.  Vastra does not offer the truth of what she is drinking. She only offers what it is not.

JENNY: Madame Vastra will ask you questions. You will confine yourself to single-word responses. One word only. Do you understand?

Already Clara demonstrates that she’s more than qualified to play this game. The first response she gives is a single word, but it isn’t an answer, it’s a question. She has already reversed the roles that have been established (now she is asking the question) while adhering to the rules at the same time. Vastra, we should note, speaks the truth and yet lies at the same time. Truth is singular, but it is also manifold. It exists and is denied by words, simultaneously.

VASTRA: You met the Doctor, didn’t you?

VASTRA: And now you’ve come looking for him again. Why?

JENNY: Take your time. One word, only.

Jenny stands in the background, behind Clara. While Vastra is the dominant one in the relationship, a “Doctor” figure to Jenny’s “Companion,” it emerges that Jenny has Doctorish qualities of her own. In particular, she is taking the role of Advocate. She encourages Clara, and eventually, as Clara reveals her qualifications, Vastra looks to Jenny to confirm that she’s reading the situation correctly, that she’s right to be impressed. So Jenny is both submissive and dominant, as is Vastra. As is Clara.  Truth is singular and it is manifold.

VASTRA: And about him?

Truth is bifocal. Clara is curious about the Snow, and she’s curious about the Doctor. Vastra recognizes that one word may not be clear enough, and yet, it is. This story is called The Snowmen, but that’s a misleading and revealing title. The Doctor is a Snowman. He is, in a sense, as much a mirror as the Snow. So it’s not a lie, or incomplete, for Clara to say “curiousity” and mean more than one thing about it.

VASTRA: What do you want from him?

VASTRA: Why would he help you?

And now we get Vastra mirroring Clara: Clara’s first singular word in this game was “Why?” and now it comes back to her – Vastra has claimed it for herself. But notice how adept Clara is in avoiding the trap that Vastra has laid – for the question Vastra asks implies a selfishness, wanting something from someone else.  Clara evades the trap by being selfless – she wants help, not for her own needs, but for a danger to others (the children) she has identified.  And when Vastra follows up, giving Clara the opportunity to hang herself by suggesting a self-aggrandizing reason for earning the Doctor’s assistance, Clara reverses the polarity of the context and answers with a reason based in the Doctor’s qualities, not her own.

VASTRA: The Doctor is not kind.

Vastra negates Clara’s claim that the Doctor is kind. “Kind,” of course, has been a key word in describing the Eleventh Doctor. Back in The Beast Below, it was along the axis of “kindness” that Amy realized that the Doctor and the Star Whale were alike.

Clara responds to Vastra’s contradiction with another negation, and puts it in the form of a question. She disagrees, and asks for clarification, taking control of the situation again. Her “No?” is also a reversal of the first word (“Yes.”) she uttered that was not a question. She has demonstrated the ability to Reverse Polarity.

VASTRA:  No. The Doctor doesn’t help people. Not anyone, not ever. He stands above this world, and doesn’t interfere in the affairs of its inhabitants. He is not your salvation, nor your protector. Do you understand what I am saying to you?

Perfect, absolutely perfect. Vastra is stunned that Clara has the kind of presence to take Vastra’s own words and turn them against her. And this gets to one of the great points of this scene. Vastra says that singular words are more true than a multiplicity. Clara’s rebuke of Vastra’s description of the Doctor seems to be a confirmation of this philosophy. (In hindsight, Vastra has not lied. The resolution of this story bears out her description. The Doctor does not save Clara, does not protect her. He doesn’t even save the world – Clara and the Latimer family are ultimately the ones who accomplish that task.)

It’s at this point, I think, that Clara also demonstrates that she has mastery of storytelling.  For telling stories, well, it’s all words, words, words.  But stories are fictions (even the purportedly “true” stories) and yet there’s a delightful irony or contradiction in the fact that we use lies to tell the truth.  Or, as Vastra demonstrates, that we can use truths to tell lies.

VASTRA:  He was different, once, a long time ago. Kind, yes. A hero, even. A savior of worlds. But he suffered losses which hurt him.  Now he prefers isolation to the possibility of pain’s return. Kindly choose a word to indicate your understanding of this.

Vastra negates her previous words. Which ones are true, and which are false? Both, and both. However, she does point to the central concern of this story, which is the Doctor’s reaction to loss. This is what the entire story is about, and the truth of it is spoken at the halfway mark of the episode, at the center.

When Vastra asks for Clara’s response, she asks Clara to do so kindly. This establishes Clara as someone who is kind, who possesses the lost aspect of the Doctor, who can function as his mirror. And her response is beautifully two-fold, not singular. On the one hand, “Man” can refer to all of humanity, that this propensity to avoid grief is an aspect of the human condition, and this is certainly true. But it can also be taken in a gendered fashion. In this scene, we have three women. They all care, they all engage in relationship despite the inevitability of grief. Back in Victorian times, at least, this was also a truthful way of distinguishing the gender roles expected of men and women.

And yet Clara’s answer is kind, because it does not cast blame or shame on the Doctor’s current situation.  She simply positions his failings as a matter of inevitability. And Vastra agrees, while Jenny nods enthusiastically.

VASTRA:  We are the Doctor’s friends. We assist him in his isolation, but that does not mean we approve of it. So, a test for you. Give me a message for the Doctor. Tell him all about the snow and what fresh danger you believe it presents, and above all, explain why he should help you. But do it in one word. You’re thinking it’s impossible such a word exists, or that you could even find it. Let’s see if the gods are with you.

We don’t actually hear Clara give her response. In the climax, we get empty space, a beat before the reveal. The ultimate negation. Which is also revealing of Clara, not just as a storyteller, but as the ghost she really is in this particular story.

There are two refreshments in our world the color of red wine. This is not red wine. Wine is a metaphor. To the Sufis, it is used to talk about divinity, the movement of God within us. And the gods are with Miss Clara. “Pond.” A single word, which carries so many meanings. The physical pond at the Latimer estate. The loss the Doctor has suffered. Not to mention the central metaphor of the story, that frozen water, a mirror to the hardened heart.  Perfectly perfect. The work of gods.