Phil, once again atop someone else’s post to announce the second episode of the Eruditorum Press Doctor Who Series 9 podcast, this time featuring a conversation between me and Jane on The Witch’s Familiar. You can grab that here, and I hope you enjoy. Meanwhile, here’s Jane with her own take on the episode in our very own Eruditorum Press version of her famed mirror threads at GallifreyBase. 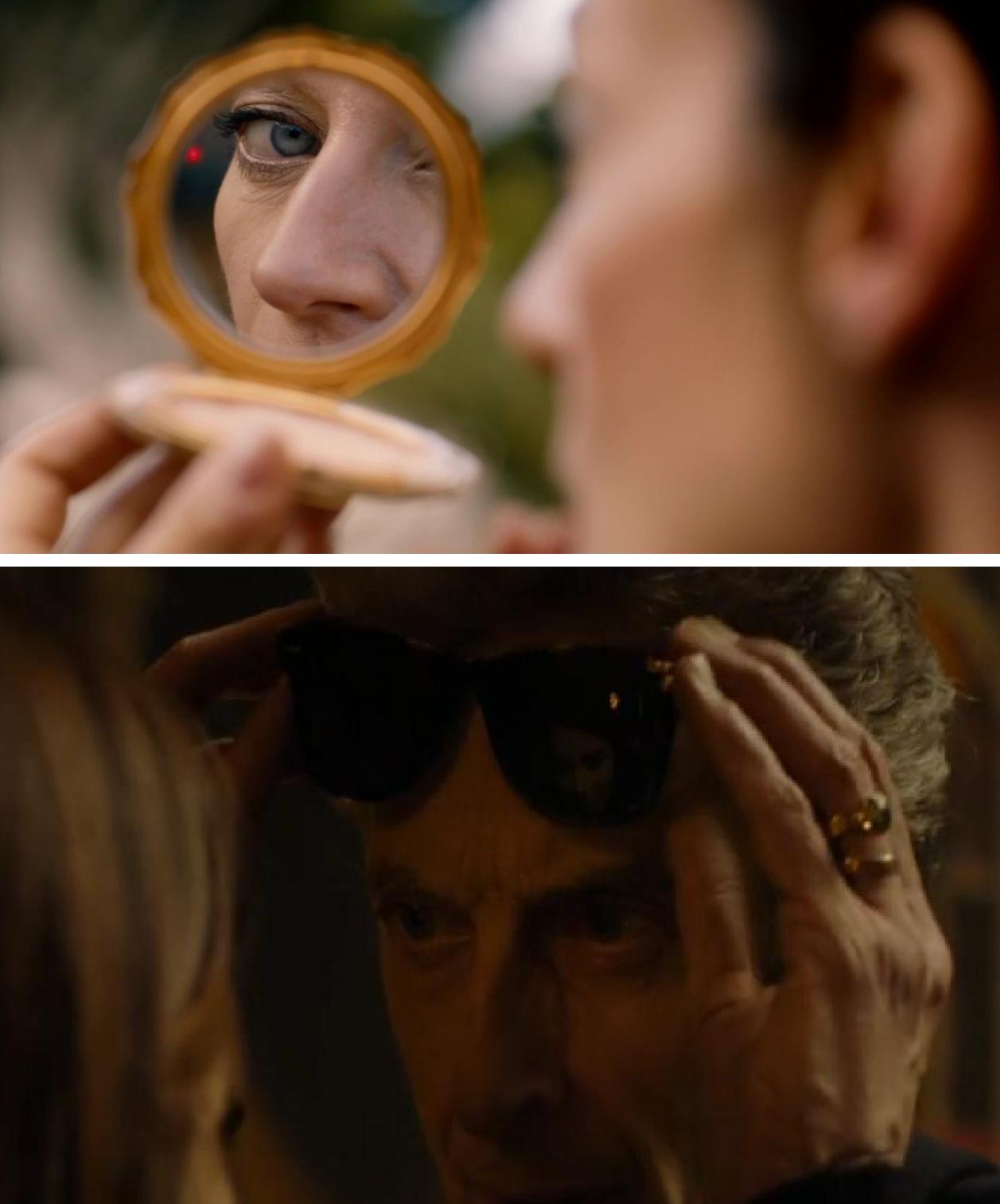 First and foremost, I look at the various mirror-shots within an episode as a skeleton key for unlocking my interpretations. So, for The Magician’s Apprentice we start with shots of Missy reflected in her compact, and Clara reflected in the Doctor’s sunglasses; in The Witch’s Familiar we have both the Doctor and Davros reflected in an eye-shaped window in the Infirmary on Skaro.

Given the titles of these episodes, the mirror shots are strangely reversed. We’d expect the pairing of the Doctor and Davros in reference to The Magician’s Apprentice, in no small part because Bors refers to the Doctor as “Magician,” while the shots of Missy and Clara most easily translate to The Witch’s Familiar, both given the contemporary gendering associated with “witch” and how Missy likens Clara to a couple’s puppy, as pets are generally consider the “familiars” of witches.

But there are all kinds of student/pupil relationships in this episode, depending on your point of view. Clara could be the Doctor’s apprentice. So could Missy, given she steps into a Doctorly role here. Or maybe Kate is an apprentice to the Doctorly Clara. Hell, the Doctor could be Davros’s apprentice, given the cliffhanger, with the Doctor now wielding the Dalek equivalent of a sonic screwdriver. Colony Sarff, partaking of an animal motif, could be a “familiar” to Davros. And so it goes. All this is to say that I don’t think there’s any singular correspondence to elicit; rather, the general aesthetic of the Magician/Apprentice and Witch/Familiar relationships are highlighted here. Relationships which are rooted in a particular power dynamic, which we’ll get to eventually. 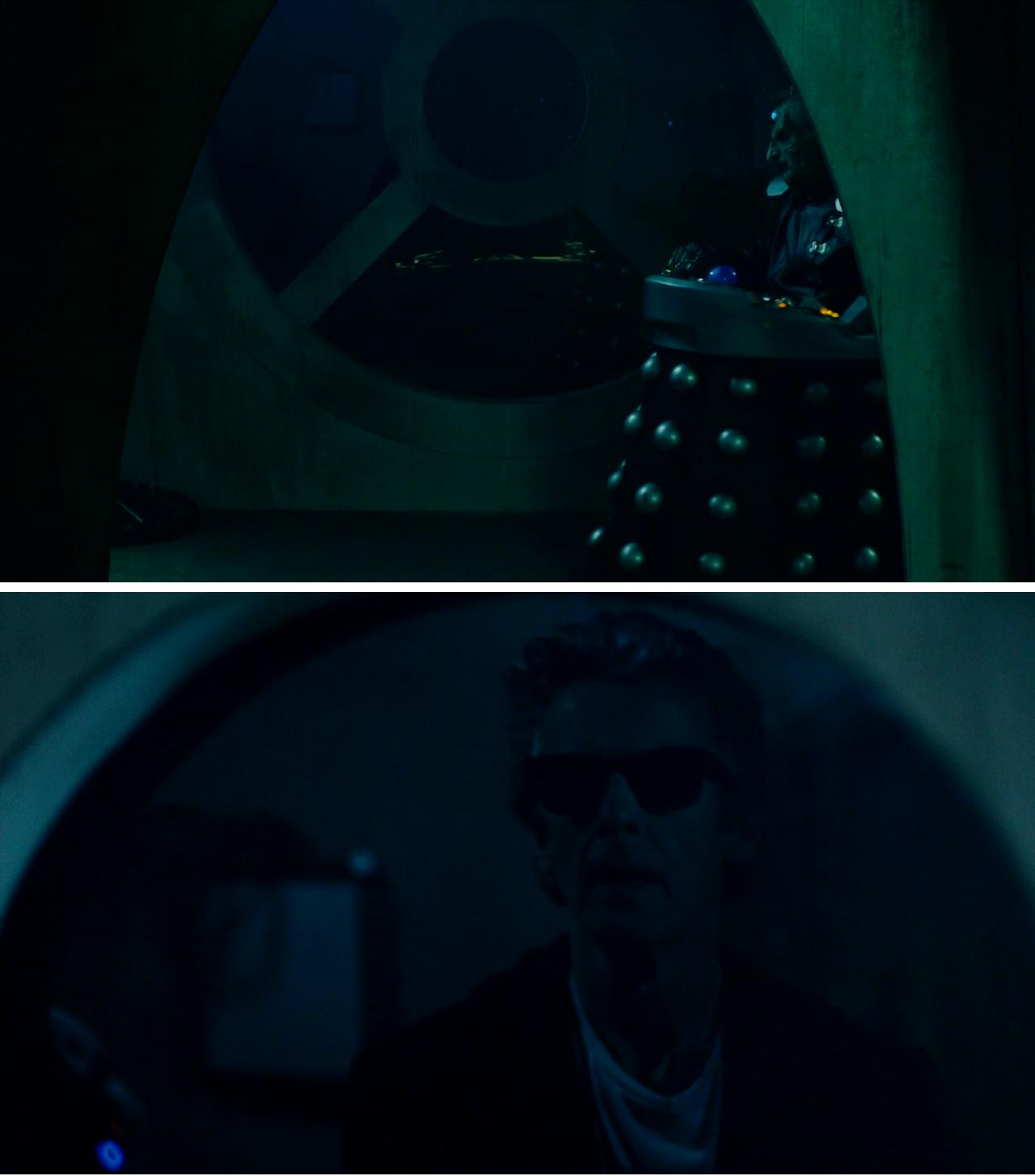 Anyways, the word “apprentice” is rather interesting, given the new monster that appears at the beginning of The Alchemist’s Pupils (my title for the two-parter as a whole). Here we see Hands with Eyes in their palms, which is actually a rather ancient symbolic motif: the Hamsa, primarily from Middle Eastern culture, is considered a talisman that wards off or protects against the Evil Eye. It’s particularly notable for being a matricentric symbol to ensure a healthy and successful childbirth. But in this episode of Doctor Who the monster is demonstrably portrayed as malevolent, sucking a soldier down into the ground.

But in mythology, which Doctor Who most certainly is, a trip under the earth isn’t synonymous with death. Rather, it’s symbolic (or more properly metaphoric) of a journey through the subconscious mind. So it’s in this context that I’m interpreting the story’s exploration of, for lack of a better word, nostalgia. For the story is obviously concerned with the past, from the plethora of continuity references to a classic time-travel trope whereby the Doctor is presented with the opportunity to kill boy-Davros well before the creation of the Daleks.

The thing about Mythology is that it’s a literary form that we can’t take literally. There are no monsters, there is no time-travel. As such, I’m generally disinclined to consider interpretations that hinge on reading the text literally. So I don’t see the Doctor’s pointing a Dalek weapon at the head of Boy Davros as a philosophical trolley-problem. Rather, as so much of the story suggests, I see it as meditation on our relationship to history and memory. Which is rather more alchemical, in the sense of material social progress, because it’s something to which we can all relate. We all have relationships to material history, and to our own memories.

And of course we have relationships to each other. And as this episode demonstrates, the roles we play in those relationships can and will change over time.  Clara, for example, has already demonstrated her ability to be Doctorish.  I wonder if this season we’ll see her becoming Missyish, as suggested at the beginning of The Witch’s Familiar when she asks for her own pointy stick. 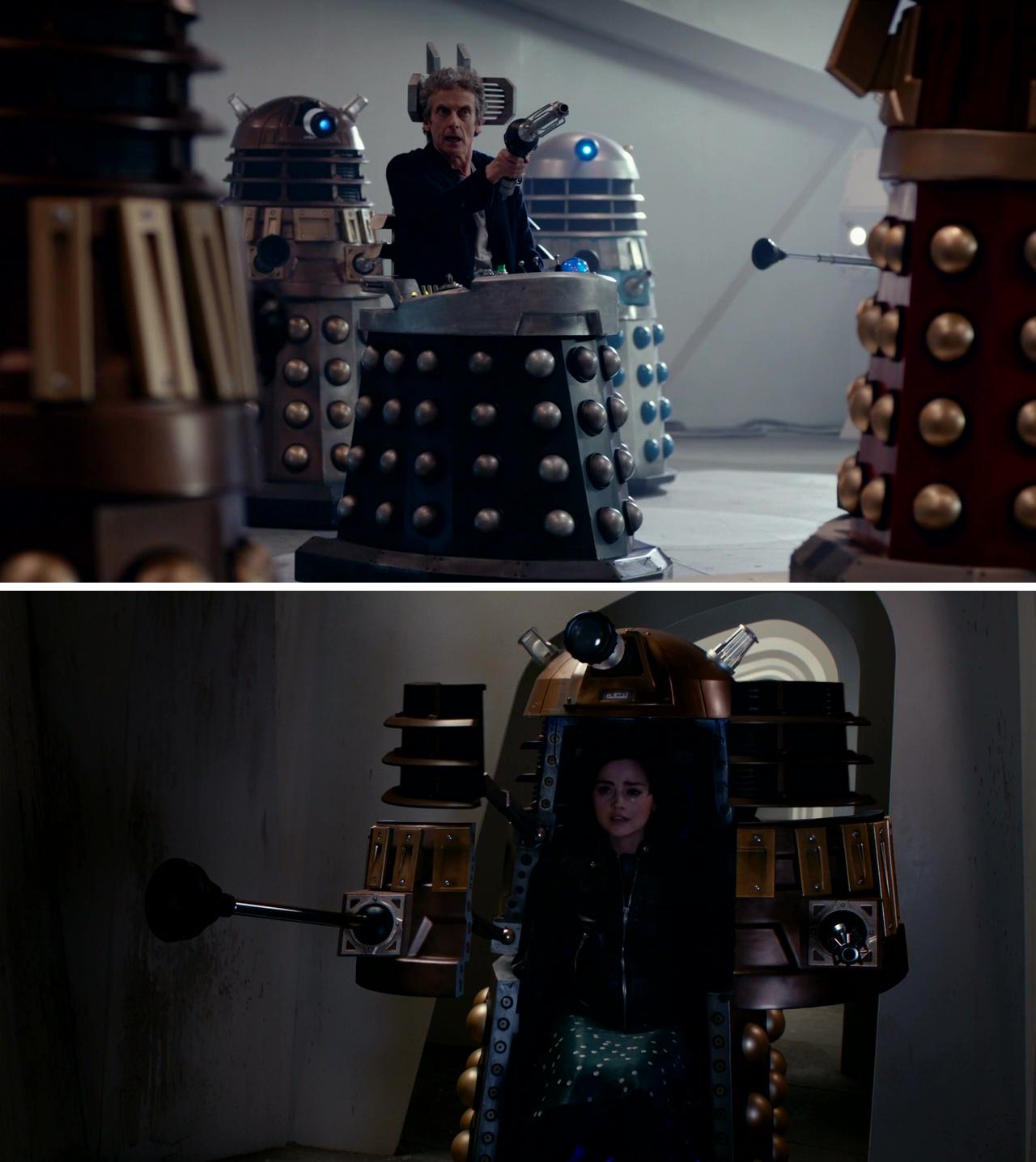 But the really poignant metaphors, as far as I’m concerned, has to do with how the Doctor and Clara take on aspects of the Daleks themselves — it’s always about the monsters, not as scares, but what they represent.  When reading mythological texts, monsters primarily represent our inner fears and our inner demons; they can also represent the underbelly of society.

Here we see the Doctor in the Chair of Davros (I’ll be writing about The Chair Agenda next week) and of course this represents him grappling with what he feels is his complicity in the creation of the Daleks.  It’s also a way for him to manifest his rage.

While the Doctor’s demons are embedded in the role he’s played in history (and by the way, I love how his solution to his complicity is to foment class revolt), Clara’s are more intimate.  Familiar, we might say.  For Clara is a control freak, and that includes tamping down those emotions which do not fit her own self conception.  The episode spells out the underlying issues — Clara’s still coping with Danny’s death, but now she also has to deal with her negative feelings regarding the Doctor, specifically with regard to his suspecting (and likely hoping) that Missy had in fact escaped at the end of Death in Heaven.  So the Dalek casing becomes a metaphor for Clara’s psychological process — encasing herself in armor so the world can’t see her face, and only now can her own negative feelings get channelled into acts of violence. She finally has a pointy stick. 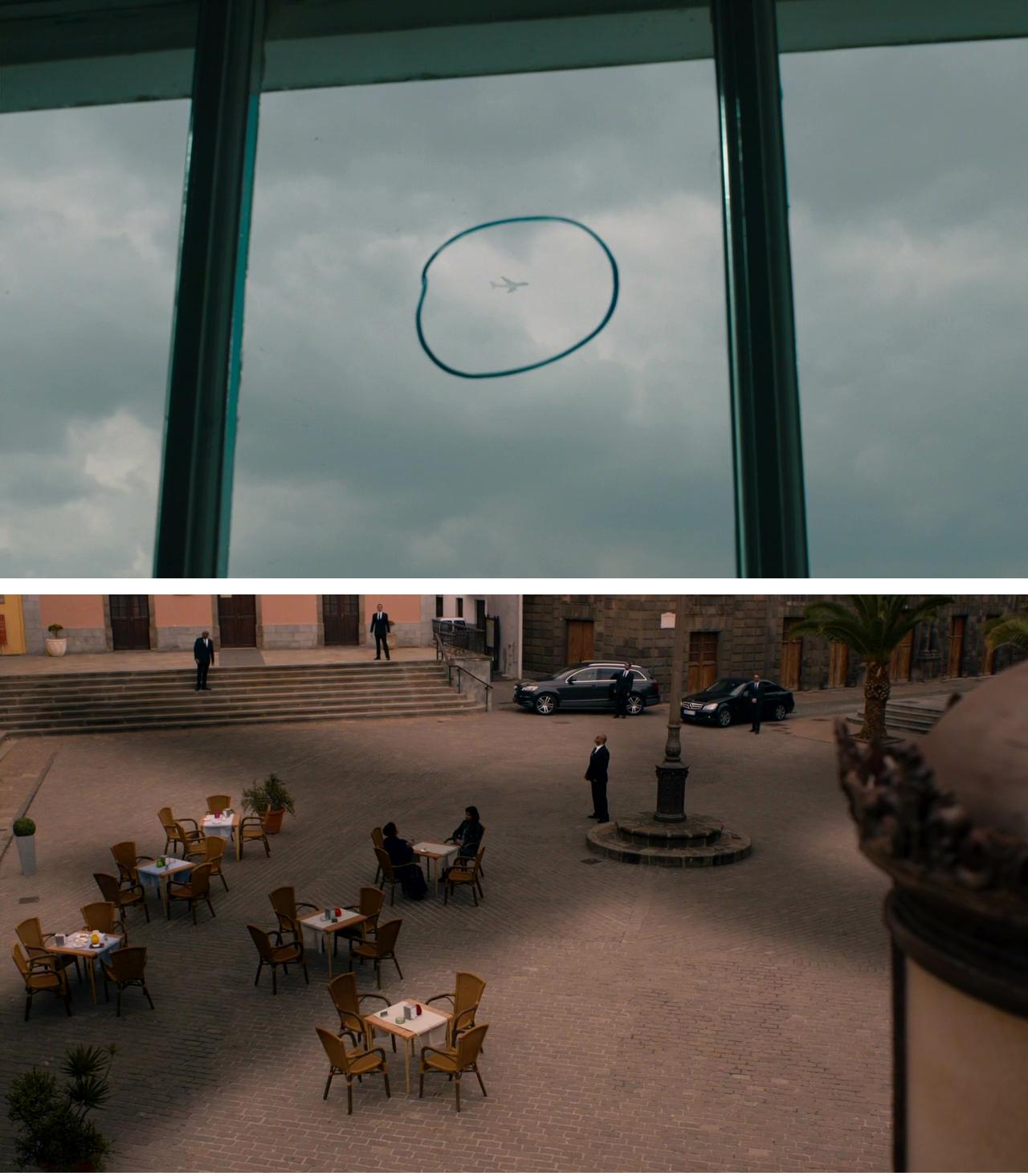 And this whole process is kind of pointed at through other esoteric images conjured by the show.  In The Magician’s Apprentice we see a reference to LOST, for example (the threat of crashing airplanes, and the establishment through dialogue that Boy Davros is “lost”) and LOST is very much concerned with how we deal with our own regrets and personal traumas, which in time-travel terms is expressed by the desire to go back and change the past.  Interestingly, this reference is coincident with a couple of other recurring symbols, namely the Circle in the Square (which represents the union of the Divine and the Material Body) and the X Motif, which is centered on a circular axis mundi in the middle of a square, where Missy presents the Doctor’s “confession dial” (a circle) to Clara by placing it on a square table.  This is done in shadow — it’s only our shadows that need confessing, not our light.

This icongraphy is repeated at the end of Witch’s Familiar, when the Doctor grabs the confession dial from the Davros’s box, another Circle/Square image.

But the whole point of this is really about psychological integration.  “Let in the shadow, let in the light of your bright shadow,” went Abigail’s song in A Christmas Carol.  Which is to say, we are wont to reject the darkness that is part and pacel of every human being.  But that desire to reject the shadow can lead to the false belief that the darkness is not (or no longer) a part of who we are.  And often that leads to a certain kind of egotism, which often manifests as a kind of perfectionism, especially in regard to how we present ourselves to the world.  Which is Clara in spades. So the X, the Circle in the Square, it signifies integration, and this too is a thematic thread in this story.  Missy spells it out for us in the end: 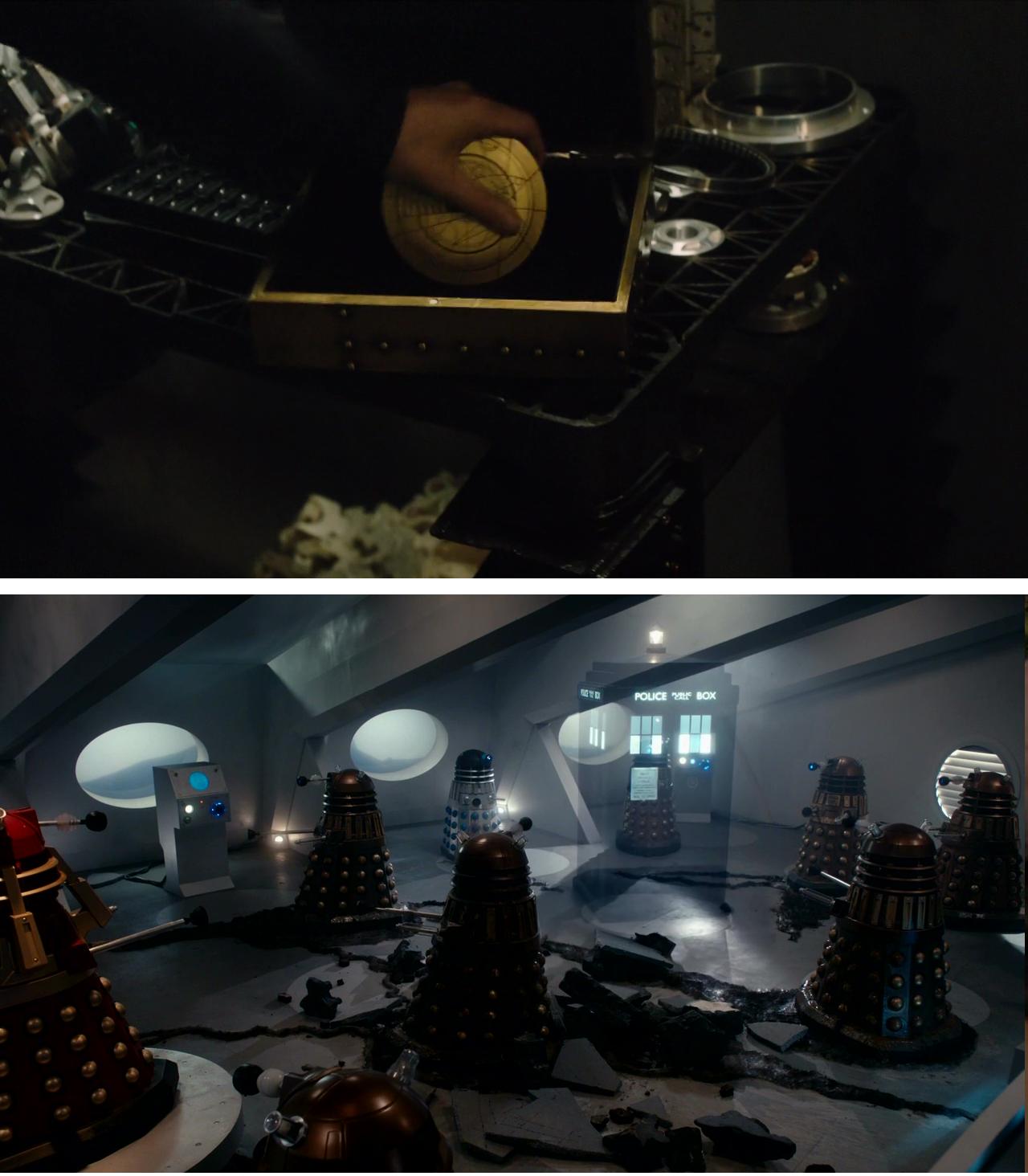 And we even get one more image at the end to drive this home.  The Doctor and Clare stand upon a circle in the Dalek headquarters, but when the Daleks fire, an invisible force field protects them.  A force field that’s square, of course, because it’s the TARDIS.  And so our heroes escape, but look at the image presented us as it disappears: a union of Square and Circle, yes, but also the image of a Dalek inside the ghostly shell of the blue box.

Finally, I really like that the Doctor’s sonic is now embedded in his wearable technology.  Just the juxtaposition of an aural device with something that assists our vision is delicious in of itself.  But, moreso, I love the idea that the magic wand is now in the form of something associated with perception, the ability to see, which is ultimately a receptive action… as opposed to a screwdriver, which is a tool for manipulating objects, for gaining control, for exercising power-over… and which also happens to be a phallic symbol.

So, yeah, I liked this one a lot, the second half much more than the first.

Comics Reviews (September 30th, 2015) “Eternity is in love with the productions of time”: True Q