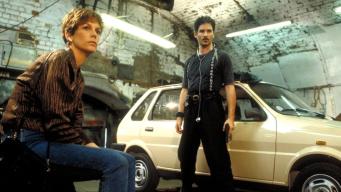 Like the cinematic heists it pastiches, “There Goes a Tenner” is both defiant and preemptively defeated. Bush’s least successful single ever, it died on the charts, slouching at a staggering #93 in the UK, was largely ignored by radio stations and TV programs, and faded into the ether with a paucity of fanfare. Following the resounding 15-month gap between the releases of “Sat In Your Lap” and The Dreaming and the title track’s subpar chart performance, the lack of public response to Bush’s twee ballad of panto Cockney robbers is perhaps a predictable outcome. In the weeks preceding and following the release of “There Goes a Tenner,” the UK Top 10 encompassed a cadre of new wave and R&B hits from Culture Club, Tears for Fears, Marvin Gaye (with “Sexual Healing,” which we’ll talk about someday), and Kool & the Gang, an overtly goofy caper homage single seemed at best like a hard sell and total commercial folly at worst.

Even on The Dreaming, “There Goes a Tenner” feels rudimentary and extrinsic. It’s a piano/bass/drum-based track like the majority of Bush’s earlier material, which lends it a vintage quality. The rhythm of the refrain’s first line (“MY-ex-CITE-ment,” “BOTH-my-PART-ners”) has an almost trochaic pattern that’s also present in Never for Ever’s “Egypt.” Unlike the psychological abstractions of “Sat In Your Lap” or “Suspended in Gaffa,” the song’s subject is narrative and conventional. It’s a classic heist movie channeled into pop music, wherein a neophyte crook assists in a robbery (“remember that we have just allowed/half an hour/to get in, do it, and get out,” “the sense of adventure/is turning to danger”). Parabolically, the heist fails explosively (“you blow the safe up/then all I know is I wake up/covered in rubble/one of the rabble/needs mummy”) and leaves the protagonist craving their simpler, less desperate past when “you [a vague pronoun] would carry me/pockets floating in the breeze.”

Such aesthetic, narrative quaintness is decidedly out of place in 1982 pop. Bush’s mockney shtick and the thinly-layered mix sound like the score for a Buster Keaton film. She’s functionally put out a novelty single, a damning move for a pop artist in her chart heyday. The result is an odd synthesis of her older work and her newer work. Like The Dreaming’s other singles, “Tenner” is an intensely vocal track, built around the use of the human voice and mix as an instrument, especially with its Cockney hashup (“OH-KAY-RE-MEM-BAH”). What we wind up with is a song that’s more weird than interesting.

It would be comforting to assert that “There Goes a Tenner” is a lost classic that was ahead of its time, but such a claim would be more than a touch mendacious. “Tenner” is approximately Bush’s nadir as a singles artist, an unfocused mess with little distinctive musicality, a lack of imagination (comparatively, at least), a grating and flatly offensive Mockney dialect from Bush, and an unsatisfying production with a post-chorus meandering synth break that sounds like Bush giving up. If there’s a great unloved single from The Dreaming (spoilers: there is one; it’s “Night of the Swallow”), this is not it.

Time for an “and yet” moment, as I have a blog post to write if I want to eat next month. Alas the “and yet” still means expounding on the flaws of “There Goes a Tenner,” but its flaws at least communicate something about a certain British attitude to class. Said attitude is toxic, problematic, and only theoretically has anything to do with poverty and the working class, but Dreams of Orgonon is fundamentally not a story of leftist or progressive values. Chronicling Kate Bush’s career entails exploring the values of the stratum of civil society which informs her work.

“There Goes a Tenner” is Bush’s most direct acknowledgement of class to date. Admittedly this isn’t saying much, since Bush adopts an offensively bad mockney accent for its duration — “OI go in/the CROIM begins.” Her evocation of a working class Londoner involves simple language, mostly descriptions of the action such as “we got the job sussed/this shop’s shut for biz-ness” and “I’m having dreams about things/not going right/let’s leave in plenty of time tonight.” A middle-class white woman equating a panto accent, simplistic articulation, and crimes with working class identity is tremendously vexed. Alongside the troubling title track and “Pull Out the Pin,” The Dreaming isn’t a great example of Bush avoiding cultural stereotypes.

Yet even with her classism, there’s some worth to her attempts here. Fundamentally, “There Goes a Tenner” channels the heist movie through a children’s panto. It treats poverty and crime with the tropes and language available to Bush through English popular culture. “Ooh, there’s a tenner/hey look, there’s a fiver” interpolates British currency onto the trope of money exploding in the middle of a robbery, as seen in such films as Butch Cassidy and the Sundance Kid. There are some hat tips to old gangster films, like when Bush observes her partners’ conduct in the middle of their robbery: “both my partners/act like actors/you are Bogart/he is George Raft/that leaves Cagney and me.” Clumsy, to be sure, but distinct in its aesthetics, and in a better song, Bush’s dive into British class politics with crime film tropes might be enlightening.

There’s something more going on here though. Bush asserted that her robbers were incompetents with limited experience: “It’s about amateur robbers who have only done small things, and this is quite a big robbery that they’ve been planning for months, and when it actually starts happening, they start freaking out.” She goes on to cite Butch Cassidy and the Sundance Kid as an example of hypercompetence in cinematic criminals, objecting to the composure of the genre’s heroes, observing “the crooks have always been incredibly in control and calm, and I always thought that if I ever did a robbery, I’d be really scared.”

Certainly the heist genre is populated by “chill” paragons of masculinity. It’s how you get lead actors like Paul Newman, Al Pacino, or George Clooney as top notch criminals. The genre offers the pleasures of breaking with the decorum of civil society while still keeping a layer of masculine authority in the mix, and its films tend to conclude with major punitive measures for the culprits (see Bonnie & Clyde, Dog Day Afternoon, etc).

Bush’s resulting bemusement at this is almost quaintly middle-class. “But don’t people who’ve robbed hundreds of banks get scared when they rob a bank” is the sort of question your childhood friend who’s horrified by shoplifting would pose. The pantheon of confident men in her early work is broadly absent from The Dreaming, which abounds with self-destructive masculinity. Moving beyond the bourgeois fantasy of domestic bliss between a man and a woman shakes up Bush’s faith in men. Femininity and masculinity become fluctuant, throttled by patriarchy, colonialism, trauma, and poverty. Bush could feasibly be writing a character of any gender here, but to have a woman’s voice leading the charge and vocalizing the anxiety that might pervade a robbery is canny.

Bush also taps into a tradition of British comedy which pivots on woefully incompetent characters issued a societal role or occupation completely unsuited to them. The likes of Python or Fawlty Towers spring to mind, and doubtless Bush saw some Ealing comedies. The children’s panto delivery of “There Goes a Tenner” infers a stylistic awareness of Bush’s debt to this tradition. The music video certainly tips the viewer off to what kind of song this is, with its frankly adorable deployment of Bush and Gary Hurst in black jumpsuits and soot on their faces, its dutch angles depicting the Very Scary robbery, and the explosion of a safe full of money. Its stars are the major aberration among these cliches; a woman and people of color aren’t supposed to be the daring stars of a heist film. This isn’t the heroic act of white men showing up the rest of the world; it’s women and minorities acting out of desperation.

For its vexed class dynamics, “There Goes a Tenner” does acknowledge poverty as a motivation for its characters. “Pockets floating in the breeze” indicates impoverishment, and the final line of the song “there’s a ten-shilling note/remember them?/that’s when we used to vote for him” is a weirdly subtle political critique for “Tenner.” When the single dropped in 1982, Margaret Thatcher’s Conservative Government was enjoying a 51% approval rating in the wake of the Falklands War and Thatcher’s craven sinking of the retreating Argentinian battleship the ARA General Belgrano, killing 323 people. By the 22nd of September, 9 days after the release of The Dreaming, 14% of the United Kingdom’s workforce was reported to be unemployed. As the Tory government waged a war on inflation in its slow establishment of neoliberalism, it caused a glut of unemployment that lost 1,500,000 people their jobs. “When we used to vote for him” is an odd phrase — but clearly the robbers have turned to crime because alternatives are unavailable (one merely has to point out that poverty is a major contributor to crime).

“There Goes a Tenner’s” death on the charts was not a tragedy. Bush’s decision to release it as a single is one of her oddest choices as a public figure. Yet even if by accident, she’s tapped into the zeitgeist of early neoliberalism and Thatcherite austerity. How come we’re not getting paid any more? Because Margaret fucking Thatcher ruined everything.

Christine Kelley writes about speculative fiction and radical politics from a queer revolutionary perspective. Currently her main project is Nowhere and Back Again, a psychogeography of J. R. R. Tolkien's Middle-earth. Her first project was the now semi-retired blog Dreams of Orgonon, a song-by-song study of Kate Bush.Support Christine on Patreon.
Dark Side of the Moon (The Cover) IDSG Ep71 Trump Loses