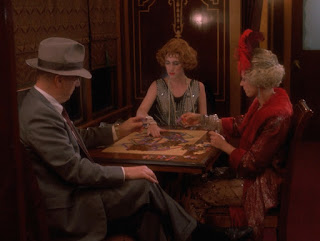 “Emergence” is Star Trek: The Next Generation. It is the show doing the best it can at attaining the best version of itself. Is it the greatest episode in the series? I could argue that. There are other productions that are materially better texts, but that's neither important nor interesting. There is no episode that embodies the potential of Star Trek: The Next Generation better than “Emergence”. It's the very best of the series gathered together in one place for critical assessment and bittersweet introspection. “Emergence” is unabashedly the Star Trek: The Next Generation that I, personally, remember. It is the one story in the entire seven year television journey I can point to and tell you that I saw this. This represents and speaks to that which I witnessed and experienced long ago, and that which I think about as I put words onto paper. It is a textual artefact and like all textual artefacts it is an artificial construct. It is a series of metonymic symbols that is itself a symbol, but perhaps it is a symbol that can help us reach common ground.

“Emergence” brings us back to the self and personal identity theory, and also to consciousness. “Emergence” makes us conscious. Whatever we are, we are more than the material sum of our brains and senses. It's a theme that has made up countless Data stories over the past seven years, which almost starts to explain and forgive his crippling overexposure here. At times one does begin to wonder why the ship has any non-Data crewmembers aboard considering they seem to spend most of their time having things explained and exposited to them. Clever child, that ghost of Wesley Crusher. And yet even now Star Trek: The Next Generation is admirably still trying to be an ensemble show: Doctor Crusher and Deanna Troi in particular get to showcase their problem-solving skills and contributions to the team in memorable ways. And for an episode that is for all intents and purposes the series' last, it's about bloody time.

“Emergence” brings us back to life force, breath and sex magick. The Enterprise gives birth. What does she give birth to? What's the analogy? That's thinking too narrowly. Saying it's Star Trek Voyager, while a broadly defensible reading given the historical context, is also unbelievably cynical and limiting. Maybe a symbol, or a metaphor, or an analogy, doesn't have to mean anything. Or at least not any one thing. There's no objective real out there, Odo. We live in a world of abstraction and radiant chaos, and meaning and symbolism is the mental trick we use to make sense of it all. Life is performative living, and we all have our own masks to wear and plays to act out. Etch a mastodon on the cave wall to give yourself guidance and purpose. We all tell ourselves stories to keep us sane: The magician is she who has mastery over stories and the power to use them to divine the truths she needs to channel. Like Jadzia Dax, the Enterprise impregnates and gives birth to herself. She is her own mother, but she is not her daughter.

What is the purpose of utopianism? Do we seek refuge in utopian dreams because they provide an escape from our world, or are we rather drawn to them because they provide us with visions of the way the world truthfully is? There is a feeling of cathartic bliss and righteousness within true revelation-A cleansing and a healing of spirit and body. Perhaps paradise is all around us, and all we need do is shift our perspective and alter the lens with which we view it. Secrets are not hidden so much as they are willfully and deliberately ignored. You are not a prison, you are a medium. An antenna tuned to the waves of universioharmonic radiance. Tune in and find your favourite song, you know the one. That one song that speaks to you, that just gets you and everything about you. You've got the best reception in the world.

A journey of discovery is a journey to discover my deepest self, for the only world we can fully explore is the world we see. We all seek the Fortunate Isles, but their secret location is different for each of us. You can draw a map, but I cannot read it. We each have a language and a god unto our own, and none but ourselves may ever know or speak it. We all seek this because we are all this. We can become this. Become reborn through the act of giving birth to our cosmic truths. Purify yourself and distill yourself: Feel the water and the air of your journey refresh and reinvigorate your truest essence.

“Emergence” can only be spoken of in abstraction. A train speeds by, flashes of light in the dark of the night. It's raining. Geordi and Data clamber over tracks that emerge from the heart of the ship itself. There's a secret room aboard where secret people live: A dining car or a bar. The secret door opens to the seminomadic world, which migrates across the ocean to the barrow-islands at the quarter of the year. Commander Riker talks to them, but they only speak in riddles. “That's how you communicate, isn't it? By metaphor!”. Star Trek: The Next Generation is annotated image poetry. A CliffNotes version of a representation of the eternal. Data will explain everything for us. Fantasy couched in science fiction technobabble and diluted so that our brains, limited such as they are, can process what they behold without going mad. And what is madness except enlightenment with no context or reference? “Emergence” is immortality, and Star Trek: The Next Generation is the world. Who do you talk to when you talk to yourself? Who am I, and who am I when you talk to me?

I do not create. I am creation. I live the art that I bear for you, and the art shall speak for itself. We shape the mask and give it a voice, but the mask speaks. But the mask's voice is also ours, yours and mine. Transform, transmute, transition, transcend. Ascend this-Ascend yourself. 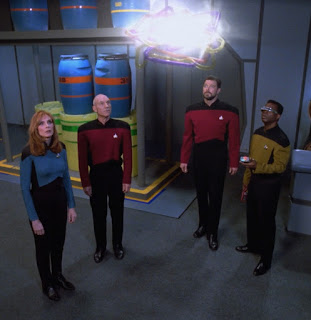 Honestly, this could work as the season finale.

There's so much that's great about this episode, it's almost impossible to believe that it was created as "the ultimate holodeck episode." That's like calling The Inner Light "a flute episode."

The neatest thing about this episode for me is actually what isn't in it. The Enterprise just became sentient and had a baby... And everyone is just cool with it. They're just like "Aight. That's a thing our ship can do. We'll roll with it." There's no conflict-for-conflict's-sake, no "tragically we must kill the ship and ensure this never happens again to preserve the status quo", no "the space-baby turns evil and comes back to avenge its mother's enslavement", it's just, yep, this kind of thing happens.