“Portrait of a frightened man”: Realm of Fear 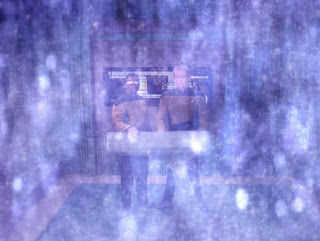 “Realm of Fear” has always been memorable to me for two reasons: Being my favourite Reg Barclay episode (I've always hated “Hollow Pursuits”, was skeptical of “The Nth Degree” and forgot he was in “Ship in a Bottle”) and being a great example of a solid, all-bases-covered Star Trek: The Next Generation episode. It's been ages since I last saw it though, and considering how much this project has made me come down with self-consciousness and self doubt about my own taste-making abilities, those positive memories could be meaningless.

Happily past me did well this time: “Realm of Fear” is great, and this season is off to a strong start so far.

This episode is pretty obviously about a fear of flying. It's kind of hard to read it any other way when Geordi tells Reg “transporting really is the safest way to travel”, and writer Brannon Braga (who suffers from mild aviatophobia himself) freely admits that was the impetus. Simple as the concept may be, that's a legitimate fear many people face, and it's a fitting thing for Star Trek: The Next Generation to look at. The primary thing that makes “Realm of Fear” so successful is that this is the rare occasion where all the different little stylistic sub-genres this show can effectively play with come together harmoniously: Given its cut-and-dry brief, you could potentially read this as a mild “Issues” story and the inclusion of Barclay gives the story's dramatic focus to a guest star, which worked to great effect in stories like “Half a Life” and Separation Anxiety and means the show doesn't have to cripple one of the mains by writing them bizarrely out of character.

(Braga also admits inspiration from the famous Twilight Zone episode “Nightmare at 20,000 Feet”: I'd never thought of that before reading that, but it does make sense. I suppose this means you could also read “Realm of Fear” as a “Let's Do” story too, though Michael Piller says he felt it was important to downplay any such comparisons.)

Again like last time, and fittingly given this is a Brannon Braga story, “Realm of Fear” is also a decent tech mystery. Some might argue there's an overabundance of technobabble here, especially during the last act, but frankly I don't have a problem with that. The way I see it, the technobabble in Star Trek: The Next Generation serves two purposes at this point. Firstly it serves as window dressing to reassure a certain subset of obsessive viewer that the Star Trek universe obeys its own scientific rules (regardless of whether or not those rules map on to anything remotely resembling any real world science) and makes the constructed world feel richer and more believable, which is what it's always done. But now it fulfills a secondary role in the narrative, which is giving each member of the crew a chance to show off their unique skillsets: Beverly gets to solve a life sciences mystery while helping to save Reg's life, Deanna offers her psychology expertise, Will and Worf offer Reg support and encouragement and Geordi, Miles and Data come up with a technical solution to save the day while helping guide Reg through his anxieties and apprehensions.

And I just love how supportive and understanding the rest of the crew is to Barclay here, and while everyone is lovely this is most clearly a terrific showing for Geordi, who for once gets an entire episode to do the sort of stuff he should be doing all the time. In fact if I had one complaint about “Realm of Fear” it would be that a lot of Deanna's dialog with Reg here could have just as easily gone to him. But that would be screwing her over: Deanna is the ship's counselor after all, she has a documented pre-existing relationship with Reg and could use all the spotlights she can get. This is also a great episode for Miles O'Brien-I love how he gets to play a role quite similar to the one he did in Separation Anxiety with Terry Oliver, empathizing with Reg and bringing up comparable experiences in his own life to help Reg get over his fear and anxiety the same way he did.

From a naturalistic and cosmic perspective, Geordi and Miles are doing a wonderful thing here because not only are they extending a hand to a friend, they're doing so in such a way that helps him become closer to the universe. A phobia is defined as an “irrational fear”, and I tend to conceptualize them as basal reflexive reactions against natural things the body has been artificially sheltered from that it might otherwise be accustomed to. Topically, I personally tend to see arachnophobia, entophobia and ophidiophobia most commonly in people who grew up in urban environments and never spent a lot of time in the wilderness. The more you're around something, the easier it is for you to accept it as part of the necessary interconnectedness of the world and the less likely you'll react out of instinctual fear or ignorance.

This is especially significant for Barclay, whose last outing saw him undergoing a transcendent spiritual experience. His fear of transporters is obviously a fear of something technological and humanoid-made as opposed to something organic, but remember also that the transporter is special technology: By breaking people down into their component particles, it is in effect returning them, however temporarily, to their most cosmic and primordial forms. One would imagine beaming anywhere would be a kind of mini-epiphany that's just another part of the mundane everyday, and that's as clear a sign as any that we've attained a kind of utopia. Actually, if you can cast your thoughts all the way back to Alan Dean Foster and “In Thy Image”, which is where Star Trek: The Next Generation more or less began anyway, you might recall Earth's technology was supposed to have reached perfect balance, harmony and integration with the universe, with architecture and urban design that seemed as natural as the land around it. The Galaxy-class Enterprise itself is made up of all those elegant organic curves: No matter what we might say about the Federation elsewhere, if there was any place that had achieved cosmic harmony it would be here.

It's so incredibly important for Star Trek: The Next Generation to tell a story about issues like this, to be caring and, crucially, not to belittle or dismiss those who might be lost or suffering. “Realm of Fear” is no different from those times when Mister Rogers would tell stories to us from the Land of Make-Believe to help children better understand and come to terms with their feelings and experiences, and because of that it's a success. Here's where Star Trek: The Next Generation's performativity, freed from the shackles of having to do damage control on itself, can do real material good: The world the show creates is an allegorical one where we can visit and work out what our life experiences mean to us and how to deal with them. It works just like the Land of Make-Believe, because it *is* a Land of Make-Believe, just for grownups. And this is oral history too, because the ancients knew stories were the best way to pass on important knowledge, skills and life lessons to, well...to The Next Generation.
Share on Twitter Share on Facebook

Even though the actual answer seemed kind of underwhelming, I liked that this episode was the first time they'd ever made a stab at addressing what the subjective experience of being transported was like. We'd never had a POV shot of someone getting beamed before, far as I know. I'd always kind of wondered if people were aware during the process, and whether the person getting beamed actually saw the transporter sparklies (Contrast with, say, Quantum Leap, where, and I don't think this actually comes up until the finale, neither Sam nor Al has ever actually seen what the audience sees when Sam leaps)

Of course the in-transporter effect actually kind of raises more questions than it answers and a sort of "take for granted magical future tech" thing by trying to be depicted 'on the inside' does change how I see it by overplaying it. But that's a tiny little nitpick for a stellar episode.

This is my favorite Barclay Annual too, and it's obvious why because he's front and center in most aspects but it's still a total package ensemble. And this episode leverages the heck out of the previous episodes. You see proper progress - and not just from Reg, who is more assertive (if still unsure), grooves with the Enterprise vibe better, gets a big damn hero moment - but also from the rest of the cast, who now that they're done being arrogant bastards the first go round and concerned but starting to like the guy in Nth Degree, are free to actually just be friends with him. He's absolutely Enterprise material. And if it's a ship where people strive to better themselves then why in hell would you want it to be crewed only by "perfect" (loaded term, of course) examples?

The transporter blob monster effect was another one that freaked me out in the good way as a kid. The show itself does monsters often enough that the ending, if tidy, was still a total surprise the first time I saw it. A proper "WAIT, WHAT?" moment and then the realization of Barclay's heroism.

There's a weird disconnect for me here too as I realize that I'm pretty invested in the Engineering Team episodes. It makes me wish that all those commercial breaks - ostensibly used for the periods of time while the Enterprise is traveling great distances - were filled with just Engineering Team troubleshooting. Space politicking is great, sure, but seeing a Senior Chief who's seen a few things giving the benefit of the doubt to this Junior Officer Technician while their teacherly Engineer and Life and Technical Scienctists do their part is just good times. And ironically it's pretty categorically not Nuts & Bolts tech-centric sci-fi. The space jargon is just there to make these people look competent at their space jobs, it's the character beats that matter here.

One tiny thing I remembered today, as DS9 encroaches - ignoring the fact that any episode where Colm Meaney shows up is technically building to DS9, this episode still features that nice, short, unobtrusive bit of world-building where Picard talks to that admiral about the possibility of Cardassian involvement.

Now, the Cardassians are certainly a discussion for about halfway through this season, but it is interesting to compare their arrival with how the Ferengi or Borg were introduced or the Romulans reintroduced. We met them fully formed and aren't sure what to think about them. And bless the creative decisions to be made, we never will be. But there won't be a lot of "Well, I wish it had been 'this way'" 20/20 hindsight could-have-beens in regards to their overall depiction.

Love this episode too. The POVF shot was brilliant and great to have an episode where the team were supportive to Barclay.