A Message from Ian Chinashop CBE 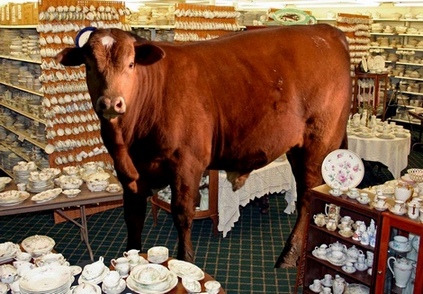 Hello, I’m Ian Chinashop, and I own and run the Ian Chinashop China Shop Co.™ And I’m here to tell you how I made it in business, and how you can make it too.

The secret of success is hard work and determination.  Without these things I could never have turned the million pounds my dad gave me on my 21st birthday into a global business empire.  Some hang around waiting for handouts.  That doesn’t work.  You just end up embittered, entitled and useless.  Some people expect life to serve them what they want on a silver platter.  I can’t stand people like that.  I had to work hard to succeed, and there’s no reason why you can’t do that too.  Some people say I had advantages, but who doesn’t?  Even if you grow up in the poorest housing estate in the country, you can turn your desire to escape into an advantage.  If life hands you lemons, make lemonade – as my friend Ian Lemonademanufacturer OBE of the Ian Lemonademanufacturer Lemonade Manufacturing Company™ always says.  He should know.  When he inherited his company from his father – Sir Simon Lemonademanufacturer – it just made lemonade.  I mean, how 20th Century is that?  Simon diversified into limeade and cherryade and cola, lemonade ice lollies, a lemonade chocolate bar, lemonade flavoured condoms… the company’s mascots – the Lemonade Family – got their own TV series and now sell millions of pounds of merchandise every year.  He puts a lot of his profits into a nice lemony hedge fund.  You see what I’m saying?  Take a disadvantage (i.e. ‘my father’s company just sells lemonade’) and turn it into an advantage.  Okay, so he had lots of help… like when he was able to pay for meetings with government ministers to lobby for relaxation of rules on what he was allowed to put into the lemonade… and able to get away without paying corporation taxes for more than a decade because he could pay accountants to put it all off-shore for him… and able to pay his staff less, and give them fewer holidays, and less compensation for work-related injuries and poisonings, and stop them joining unions, and pay less for more part-time workers on precarious contracts, all thanks to liberalisation of labour laws… but hey, that’s just winners helping other winners.  You can’t complain if the winners do that, it’s part of how winners get to be winners.  If you want to be part of the winners club, where the winners help the other winners, then use your individual enterprise and initiative to turn things around for yourself.

There are certain facts of life that everyone has to come to terms with.  You never get anywhere without a hard-headed appreciation of how the world works.  This is especially true in business.  If you’re going to succeed in a business, you need to make yourself master of the facts of that business.

I’m going to explain to you how the china shop business works.  We all inhabit our own separate universe.  Maybe my universe works differently to yours.  But I’m going to tell you about mine and you can hopefully draw lessons to use in your own life.

So here, in a nutshell, are the basics of the China Shop business.

Every china shop must sell china, of course.  Also, every china shop must have a bull in it.  This is just common sense.  This is how the world works.  There are, apparently, a few loonies in the world who have suggested that it’d be better not to have bulls in china shops, but we can safely ignore them.  They’re in a tiny minority, nobody listens to them anymore, they’re in the dustbin, they lost the war a long time ago, history itself has adjudicated upon this issue and shown that it’s simply crazy to not have bulls in china shops.  It was tried, and it didn’t work.  Human nature, the laws of economics, whatever.  People are just not built to not have bulls in their china shops.  Ages ago, there was a global movement to take the bulls out of the china shops, and it ended in disaster.  A bunch of tyrannical and dictatorial bullies set up an entire system of china shops without bulls in them.  They mercilessly deprived entrepreneurs of the liberty to put bulls in china shops, robbing them of their individual property rights.  The bull-free china shops all became authoritarian and mistreated their employees.  That’s just the way it goes whenever you try to take the bull out of the china shop.*

Now, a lot of people (actually, it’s very few people)** say “but it’s absolutely crazy to keep bulls in china shops!  They smash up all the china!  Nobody can get any unsmashed china for Chrissake!”  To such people I would say: you have to remember that we’re living in the real world.  It’s always been this way.***  Bulls have always needed china shops and china shops have always needed bulls.  There have never been any china shops without bulls in.  It’s been tried and it didn’t work (see above).****  On the other hand, the invention – by brilliant, enlightened, progressive geniuses – of putting bulls into every china shop instantly made the world much better for everyone.*****  People actually don’t see that this is a great world where people can do well!  How can they not see it?  I mean, look how well I’m doing!  It’s amazing to me that some people want to go back to the bad old days.

Anyway, to address the criticism.  Yes, it’s true that there’s no way of buying unsmashed china… but look at the choice the market provides people with.  You can choose to buy all kinds of smashed china.  There’s cheap smashed china for people on reduced income.  There’s luxury smashed china for those who’ve had more success in life.  There’s kids smashed china – little smashed plates featuring cartoon animals and alphabets, etc. There’s novelty smashed china, like the range of smashed china featuring cartoons of the Lemonade family that I sell in conjunction with my friend Ian Lemonademanufacturer (one of my best lines!).  Okay, so people find it hard to eat off smashed plates, or drink from smashed cups… but there’s always dented pewter (manufactured by my friend Lord Ian Pewterworks) or scratched and brittle plastic (manufactured by my friend Sir Ian Plasticmoulding).  There are even special companies which glue the china back together for you.  See how the market provides!  Yes, a few people get poisoned because they choose to eat with their hands, or off work surfaces, rather than use smashed china… and yes people catch infections from germs that breed inside the cracks and chips… but that’s all a product of their choices.  That’s what the current system is all about, you see… choice.  And you have to take personal responsibility for your choices.  I, for instance, choose, to use china that isn’t smashed.  I take it out of the shop before the bull gets to work.  That’s my choice.  Now you can whinge and whine about how “it’s not fair” or you can get off your arse and make the kinds of choices in life that put you where I am, and thus give you that choice.  It’s not hard.  Besides, if you’re scared of hard work you only have yourself to blame.

People often wonder how china shops can make a profit from smashed china.  Well, it’s simple, my friends.  So simple, I’m not going to even bother telling you.******

Now there a lot/few people these days who want to go back to the bad old days when people questioned the inherent and obvious rationality of the bull-system.  There is even a leader of a major political party now (he might’ve gone by the time you read this) who is a raging anti-bull fanatic.*******  Firstly, to him and people like him I say: #BullLivesMatter.  Secondly, as I never tire of sying: it’s been tried and it failed.

in recent years a certain South American country came under the sway of an evil anti-bull dictator******** who turned his country into a bull-slaughtering hell-hole where people who even mentioned bulls were tortured to death.*********  Well look at that country now.**********  That’s what happens when you try to change the eminently sensible bull system.

I rest my case.

**Notice how Ian can simultaneously believe that the people criticising him are manifold or scarce, depending on how victimised or triumphant he wants to feel at any given moment. – JG

***Notice how baldly this is presumed.  It’s this way now, so it must always have been this way.  Soon Ian will also say – without any sense of contradicting himself – that the bull-in-a-china-shop system is a recent invention that made everything much better. – JG

****Notice how Ian can simultaneously believe that it’s never happened and that it’s been tried and didn’t work. – JG

******There are various rumours about how profit is extracted from smashed china.  Some say the smashed china manufacturers made a deal with Satan.  They sold him their souls in return for him opening a permanent portal to another universe (to which they would have exclusive access) where smashed crockery is used for currency.  Actually it’s simpler than that.  We have to buy the smashed crockery because that’s all there is.  So they make money.  They make more money than they pay out to the people who make the china, or stock the shelves, or rear the bull, or feed the bull and clean up its shit.  I mean, of course they do… nobody would ever pay anybody to do anything if a) they didn’t need it done in order to profit in some way, and b) the profit they got back was more than they paid in wages.  QE-fucking-D.  – JG

*******Actually he’s a very moderate reformer who just thinks the bulls should be better restrained inside the shop so the damage they to do the china is minimised.  But he looks like a bloodthirsty matador to us now because the centre ground has been shifted so far towards ideological pro-bull extremism. – JG

*********Actually, the country in question did not overthrow the bull-system at all.  It just reformed it along lines that are anathema to the fanatical ideologues of neobullism, the doctrine which states that all public services need to be sold off to bull more bulls to put in all shops of any kind. – JG

**********Again, what Ian won’t tell you is that the country in question was relentlessly undermined by the pro-bull fanatics who wield enormous power in the world, up to and including sponsored coups.  Meanwhile, the country is in such a state now because, while the system was reformed to an extent, it stopped short of a full anti-bull revolution, and continued to rely on bull-based trade on the world market, which crashed (owing to the internal contradictions of a system that relies upon smashing things up so a tiny number of people can profit).  The fate of the country alluded to, though often adduced as proof of how non-bull-based economies always fail, is actually further proof that the global system we currently live with – the one based on deliberate destruction – is insane. – JG

Satire is dead.  Metaphors all fail.  Analogies never work.  Allegories are inherently inadequate.  I won’t make the inevitable pun on ‘bull’.  This dead bull has been flogged enough.