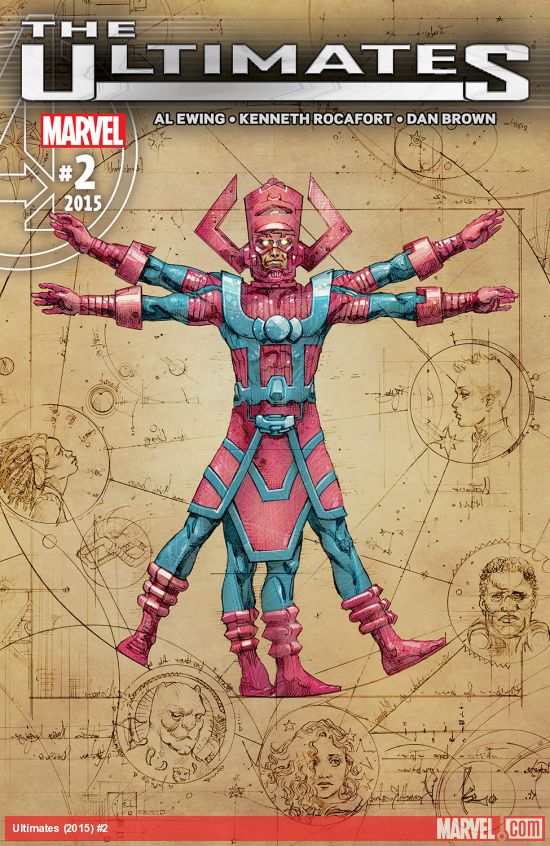 The splitting of issue #7 into two proves rough, mainly because #7 was just a big fight book, and two issues of punching in a series that’s past due for conclusion ends up being a bit of a hot mess. I’m invested in the main character conflict of this – Reed, Sue, Doom, and Valeria, essentially – and looking forward to its resolution, but everything else feels like it’s been going on for simply ages, persumably because of how it’s been going on for simply ages.

Guardians of the Galaxy #3

Bendis’s books are often slow, but this one is really being intolerable at the moment. Three issues in and it feels like virtually nothing has happened, and like nothing does happen in this issue. As ever Bendis remains good at character moments, but he’s not integrating those moments into any sort of directioned overall storytelling here. The return of Yotat is a complete non-thriller, three issues in there’s still no visible benefit to Ben Grimm’s addition to the team, and just… meh.

Gillen does an espianoge done-in-one, which is a genre I don’t feel like he’s played with much outside of Alastor. Definite notes of Ellis throughout, which is basically where you’d expect Gillen spies to go, but with a nice, approachable Star Wars sheen that makes it distinctly fun. I assume this is continued in next week’s Darth Vader Annual, also by Gillen, but I base this entirely on the vaguely cliffhanger ending and not on anyone bothering to indicate this anywhere whatsoever in the issue – there’s not even a house ad for the other annual. That’s dumb. Anyway, this is fun.

After two issues that felt a bit slower and more setup-based than one necessarily wants for something basically pitted as “ultimate punch book,” this finally takes off and starts using its premise in full. Ewing is fantastic at playing with the deep weirdness of the Marvel Universe, and things like an Elektra Natchios Bullseye, the original Eddie Brock Venom, and a Rick Jones Hulk full of 60s idealism adn smashing are genuine treats, used here in fun ways. Glad to see this getting up to speed.

Some brilliant stuff in the first half, in which Ellis comes very close to tipping his hand about what he’s doing in this book, which is probably a good thing by issue #13 of something. The second half is more of a let-down, as Ellis does a basically wordless action sequence that, while drawn beautifully by Jason Howard, is brutal to follow given the absolute lack of reminders as to who anyone is. The incoming mayor seems happy with who’s getting shot, so that’s something, and I assume the fallout from this next issue will make some sense, but there was some distinct roughness here.

This picks up a lot, and is my favorite issue of the relaunched series to date, rescuing it from my half-considered drop. Only one major downside: almost everything that’s great about it is Gwen in Earth-616 (and I had no idea we were still calling it that) talking with Jessica Drew, which kind of confirms my sense that Gwen is more interesting crashing in with the main Spider-Man continuity than off in her own little corner. Although even that stuff was pretty good this issue, truth be told. A welcome return to form.

There’s a really nice, bombastic statement of purpose in the back of this book where Ewing talks about trying to live up to the Millar/Hitch run. Which is really charming, as it’s not like Ewing and Rocafort came onto this book with the critical buzz and reputation of Millar and Hitch. But there’s a sense of direction and ambition to this that’s really satisfying. Ewing is playing to many of his strengths – the team selection is excellent, Rocafort’s art is genuinely gorgeous, and all in all this is just a delight of a book. Interested in seeing where Ewing goes with this rather significant change to Galactus though. And just in general with this.