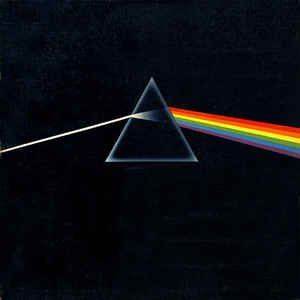 The alarms go off!  Thunder in the other course of heaven!  My sister and I scream, and Daddy laughs out loud, his voice booming off the walls.  The lights flash on.  “Bill!” my mother yells, “Don’t get them wound up before bedtime!” As if we weren’t wound up already. Dad only laughs, self satisfied.

I love my Father.

47 years later — that’s an esoteric number for you JJ Abrams fans — and now I’ve got that feeling once again.  I’ve heard the album well over a thousand times, more than anything else I’ve ever listened to.  I have a strange take on it, I hope.  I’m not going to drear you with the history of the album, how many weeks it charted, how much cash it made.  It’s easy enough to find those stories.  But to be honest, I’ve never written about music before.  I’m not a musician, despite having learnt the piano.  About all I can remember how to play is a version of the Doctor Who theme stitched together from various composers — Gold and Howell primarily.  It’s clunky.  I’ve never studied music theory.  You’ll do better from other sources if that’s your gig. My approach to describing music will be a bit more synesthetic.

What I am is an alchemist.  And in Dark Side of the Moon, I see a lot of alchemical themes.  I think this is an album that I can use as a prism into my insights regarding alchemy. I think this because Dark Side of the Moon charted for, like, a gazillion weeks.  It takes something special to last for so long.  It has become embedded in our collective consciousness.  Something about it must be… true.  So I will be reading it like a piece of mythology.  I will be reading it closely… as if it were truth.  As scripture.

I propose a number of essays, loosely oriented around each of the songs. (The songs merge into each other; dividing them is an act of consciousness.)  The songs will ground and amplify the alchemical materials — Ritual, Duality, Reflexivity, Putrefaction, Synchronicity, Equivalent Exchange, Purification, Sacrifice, Perfection.  The alchemical themes will open up the songs to deeper understandings and aletheian meanings.

Let’s talk about the cover for a bit.

You shine a light through a triangle of glass, and it cuts into little pieces the distinct colors of the rainbow.  The whiteness is transformed into color; it is actually made up entirely of colour, not the absence thereof.  But the colour only exists in your head, which is why the “u” belongs in the word.  Objectively, it’s just a narrow band of electromagnetic radiation. You are the master who makes the grass green. But you are not the master. Your brain is God, creating a holographic simulation into which your consciousness may reside. Thou art that.

On the Other Side, colour becomes white light, the pyramid is inverted, and verily all is surrounded by darkness. The moon is a harsh mistress. She is a sign, a harbinger, a symbol of the subconscious, and a mirror. Albedo 0.12 and counting. 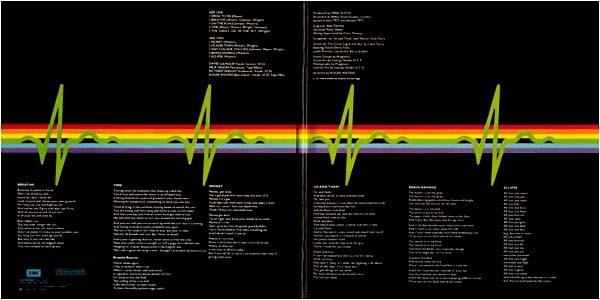 There are no words on the outside, no title; we have to open up the album and look inside for some context.  Rainbow lines run across the interior, with a heartbeat along the green band — the color of the heart chakra.  There’s no indigo; the chakra of the mind is skipped entirely as we pass through the light blue throat chakra and directly to the crown.  Above the rainbow, words. 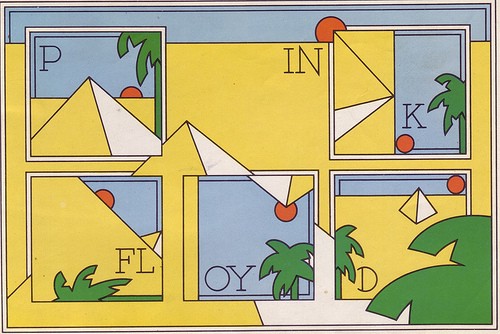 Deeper inside we find two posters and some pyramid stickers.  The stickers have the name of the band scattered about as distinct letters, with the whole tableau and each little box containing the same icons: pyramid, ground, sky, sun, tree. All from different perspectives.

The Tree is an alchemical symbol, one of Connectivity — that which bridges Above and Below (ground and sky, Matter and Mind).  The Sun is the Divine Masculine, shining forth to give us the day, the light, the fire of warmth that grows the tree and keeps everything alive, and everything is alive.  Except in the Pyramid.  Inside the Pyramid it will be dark, forever dark, for the Pyramid is a tomb, is death, is permanent, which is why it was constructed this way. There’s no water in the pictures.  The endless river is apocryphal.

The Pyramids are reflected in the first poster, a photograph taken at Night, under the Moon, the Divine Feminine hidden from direct view.  So we find a Union of Opposites, an Alchemical Marriage.

The other poster gives us the band.  “Roger” means “famous spear” which invokes the Centurion’s Lance that pierced Christ.  Water, of coursre, is a reflective surface, but “Waters” also symbolize Chaos, the primordial Divine Feminine in all Her terror, before the construction of the world via the Logos — of course, Roger Waters is the primary lyricist.  “David” means “beloved” and is known as he who slays Goliath.  “Gilmour” derives from a Gaelic name meaning “Son of the Follower of the Virgin Mary” — a son of Christ, in other words, but again with an emphasis on the Divine Feminine.  He slays with his guitar.  So the two leads of the band are intertwined.  “Richard” means “strong ruler” and “Wright” means “maker” — compare to “Mason” who is a builder of stone, (bringing us back to the Pyramids) but this one is a “Nick” which has all kinds of interesting connotations (cutting and stealing, he of course delivers sampled sounds and voices to the tracks) as well as deriving from Nicholas meaning “victory of the people.”  They stand in the background, historically, but these two are also linked and form a scaffolding for the quartet to construct their art.  (Don’t forget, the ghost of Syd Barrett lurks unseen, whose names mean “broad island” and “bear power” so I can’t help but think of Polar Bears on the Island, whispers of LOST.)

So, let’s talk about Equivalent Exchange for a little bit.  Alchemical transformation is based on universal principles.  In the Universe, Matter/Energy is neither created nor destroyed, only transformed.  To make alchemical changes, you must give something to create room for something else to flourish.  It all comes around in the end.  Karma is a bitch.  She who hath ears, let her hear.

I will put these essays out to the Universe, here at the Eruditorum.  I will give them to you, every few weeks or so.  You, in turn, will support the Eruditorum, but in a particular way: I am asking you to make your sacrifices (your “making sacred”) to Christine Artemisia Kelley — daughter of Christ, heart of the Goddess-Wild, borne of Strife. The first goal is to raise her Patreon by 2.3% (numbers are important). You can find her Patreon here: https://t.co/BllZ1bYIc0?amp=1

I have faith that the energy she receives from this will form an alchemical circuit that will in turn feed me to write more essays, until this Great Work is completed.  As of right now, her Patreon sits at $301.  When it reaches $308, I will be on the hook for the first essay (which will focus on Ritual, and run quite long).  It’s swirling in my head right now.  I can see the shape of things to come.  Be patient.  I promise.  If it’s meant to be, it will be.

I have faith in the Universe.

I’ll see you on the Dark Side of the Moon. 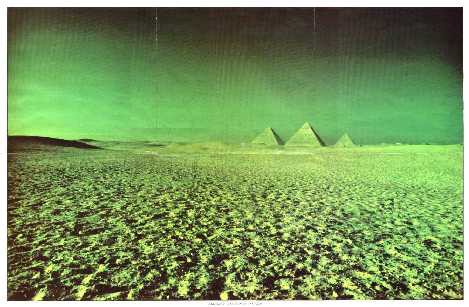