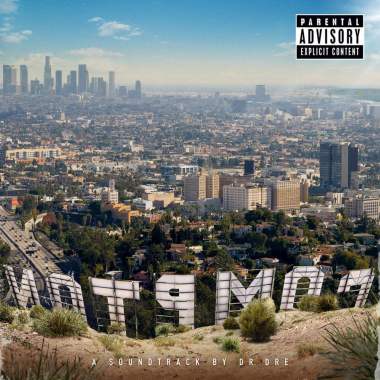 August 7th, 2015 will presumably not join January 24th, 1984 and October 23, 2001 on the list of celebrated Apple anniversaries. This will, I suspect, be a mistake. The release of Compton (all together now, “Dr. Dre’s first new album in sixteen years”) is every bit as significant a cultural moment as the Macintosh and the iPod, even if its status as a pop moment is likely to obscure its status as a moment in the history of tech culture, and, more broadly, the way it positions Dre as the king of both Compton and Cupertino, for good and for ill.

The album is, after all, an Apple product, even if it says Aftermath/Interscope on the label. Because, of course, there wasn’t a physical label when the album was released: it was an Apple Music/iTunes Store exclusive. This is part and parcel of Dr. Dre’s newfound status as Apple executive, as was the album’s announcement, just a week before its release, on Dre’s Beats One show.

The theatricality of that move is not the only thing borrowed from Steve Jobs. Dre is working in the same role of renowned visionary overseer that Jobs occupied in his later years. Dre’s albums have always been intensely collaborative affairs, but on Compton he is less the lead artist than the CEO, serving as the drummer for decades of hip hop talent, from Ice Cube to Kendrick Lamar, to march to. Beats by Dre, if you will.

In this regard too, Dre is following in Jobs’s footsteps, with Apple’s 2014 acquisition of Beats by Dre being made in the model of its 1997 acquisition of NeXT. In 1997 they sought both to use NeXTSTEP to make up for years of stalled and inadequate modernisation of MacOS and to (re)acquire the services of Steve Jobs. In 2014, the platform past due for modernization was the iTunes Store, the acquired technology was the Beats Music service, and the executive talent was Dre.

Central to this process is the fact that Dre functions as a luxury brand. That’s the whole point of Apple Music itself, which, for all its interface foibles, still has the sense of quality design one expects from Apple, carefully chosen and immaculately kerned typefaces over lush stock photos all combining to scream “we’re classier than Spotify” as loudly as possible. But this sense of design is just as visible in Compton. A Dre album has always demanded that it be listened with an ear trained on the quality and innovation of the production. It has to be a smash hit also, but its true audience is the engaged connoisseur. With its collage of 70s funk and analogue synths, 1992’s The Chronic hinted to listeners that hip-hop’s most formidable power wasn’t revolutionary rhetoric or gun love, but a particular poise of laid-back confidence; seven years later, 2001 was a victory lap featuring the era’s top names paying Dre tribute, demonstrating the immeasurable material payoff of his approach

Or, to put it in terms of the tech buzzword du jour, Dre has always been curatorial, presenting new sounds and artists to the world so as to carefully cultivate an image as the ultimate in tastemakers. It’s telling that the abandoned Detox lived (or failed to) in the period between his launching of Eminem, whose emergence coincided with 2001, and the imperial phase of Kendrick Lamar, which is to say, the period where Dre lacked a brilliant protege. And Lamar’s three appearances on Compton are all overt standouts, showcasing him at his most technically audacious, standing out even within what has, to say the least, been a hell of a year for him.

Lamar, however, is just the crown jewel of this career retrospective. Indeed, “Darkside/Gone” even has him share the track with a beyond-the-grave Eazy-E, a move that emphasizes the genuine sweep of Dre’s career. And most of the highlights of that career are represented here, with Ice Cube, Snoop Dogg, and Eminem all turning up for obligatory performances. One of the album’s most revealing moments comes in the latter of these, as the dizzyingly paranoid crescendo of Eminem’s verse fizzles into banal rape braggadocio. It’s tempting to call it unnecessary, but that seems a strange word for something so keeping in the style of both Eminem and Dr. Dre’s past work. Indeed, it borders on being an exercise in ticking off boxes.

Crucially, this sense of curation isn’t just biopic-inspired nostalgia on Dre’s part: it’s at the heart of Apple Music’s sales pitch. It’s the promise of the self-consciously broad reaching Beats One radio – a constantly and meticulously selected representation of the immediate moment in pop music, its quality warranted by Apple’s reputation (at least among its post-yuppie base) for impeccable taste. And Compton befits the brand, showing off a sonic palate that jumps from invocations of vintage g-funk beats to sampling Turkish psychedelia, with more focus on showing off the breadth of Dre’s magpie museum than on smooth transitions; at times it can’t go more than thirty seconds without overtly repositioning itself.

This proves a good fit for 2015; certainly it suits Kendrick Lamar, but Eminem and Snoop Dogg are also flattered by the flood of sounds and concepts rushing around them. And the album takes pains to situate itself in the present, with things like the resolution of “Deep Water” – a man drowning over a throbbing and indifferent saxophone line, his last words a desperate quotation of Eric Garner that give way to forty-five seconds of gulls and slowly deflating sax. The album regularly makes such efforts to reiterate its social consciousness. Its opening track features a voiceover from an old news segment proclaiming how Compton was the black American dream turned sour, and even Eminem muses thoughtfully about the systemic nature of white privilege.

It’s got the unmistakable sound, in other words, of a man who’s decided he wants to change the world instead of selling headphones. But then, as Dre reminds us throughout Compton, he’s already sold an awful lot of them; his first actual line on the record is the declaration that he’s just bought California, shortly before bragging that he’s still not opened all his Eminem checks. Dre has always been one of the pioneers of the hip-hop success narrative; 2001 was awash with boasts about his opulence. In many ways, this is why Dre is the hip-hop mogul to make the jump to billionaire tech executive. His braggadocio has always been rooted in the inviolate logic of capitalist spectacle whereby you can’t argue if it sells millions; the same logic that underlies the myth of Apple’s design genius.

But the whiff of cynicism doesn’t come close to invalidating the underlying accomplishment. Not only has Dre taken the role of “the black Steve Jobs,” he’s done it while keeping the emphasis firmly on the black part of that, ensuring that his myth is as rooted in black culture as Jobs’s was in 60s psychedelia and utopianism. The album never lets you forget that Dre’s ascent is a story of black America, constantly returning focus back to the systemic racism at the heart of Compton’s problems, most obviously in “Animals,” where the hook opens with Anderson Paak pleading “don’t come around these parts and tell me that we’re all a bunch of animals.” In this regard too, it’s well-suited to its time, embodying the post-Obama turn in civil rights away from mere equality and towards acknowledging the singular importance of black perspectives.

For all its dangers and problems, though, Compton is, as always, an object of celebration. Its role in the story is not that of dystopian urban hell, but as the crucible out of which Dre’s genius is forged. In this regard, it’s impossible to think of Compton as entirely separate from Mavericks, whose famously dangerous waves and obvious utility as a symbol for Apple’s brand of creative vision started the tradition of naming Apple products after California locations in which Compton follows.

This ends up pointing towards the problem with repackaging Dre as a latter day Steve Jobs. Dre’s social conscience has always been selective, as willing to lay down a beating on Dee Barnes as he is on a racist cop. But as schizoid as it is to have an album that’s simultaneously evoking Black Lives Matter and presenting a comedy sketch about shooting a woman and burying her body, there’s something truly baffling about Dre rapping about how he was “just a young black man from Compton wondering who could save us and could barely read the sentences the justice system gave us” on one track, and then on another proclaiming that “anybody complaining about their circumstances lost me.”

It’s not just that Dre has acquired the conservatism that middle-aged self-made men do. Sure, at various points on Compton he’s heard complaining that girls act older than they should, kids spend too much time on the Internet, and music these days all sounds plastic, but you can hardly begrudge him the right to tell the kids to get off his lawn. (Actually, he probably has security for that.) The problem is that the myth of Dre as singular visionary genius means that his narrative is necessarily unrepeatable. The dangerous waters of Compton may have spawned Dre, but they can’t possibly do so again. Which makes a track like “All in a Day’s Work,” which opens with fellow Apple mogul Jimmy Iovine talking about fear as a motivational force and closes with Dre admonishing the world that “if you really wanna do it like this, shit you better get back to work” more than slightly tone deaf.

But nowhere are the contradictions implicit in Compton more visible than its final track, “Talkin to my Diary.” For all that the title and its status as the one solo Dre track on the album implies a level of intimacy and confession, we never get access to the diary – “no ink in the pen, no lines on the paper,” as the chorus has it. Instead, the talking is an internal process, done while staring at the sky. Dre remains a wholly absent figure, a fact emphasized by the fact that after the end of the second chorus, nearly two minutes from the track’s end, Dre simply disappears, replaced by a trumpet bridge that simply fades out with the track and album. We see the shape of him, an eternally recognizable silhouette cast over a sonic hue at once striking and sparse. The sound is unquestionably that of a hip hop icon. But the design is that of an Apple icon.

The Chair Agenda “Aside from his face, he’s ugly”: A Fistful of Datas

We Will Reach The Promised Land: Liberal Science Fiction at the Fall of Democracy

The Wasted Daughter of the Moon: The Trans Genius of Dave Carter