Marcos Told Me to Think of Time as a Record Player, with the Stylus Tracing the Present (The Last War in Albion Book Two Part Twenty-Three: Alan Moore)

Previously in The Last War in Albion: Yeah, you should probably just go read that one again if you don’t remember.

It is October 1987. Moore is sitting down to dinner after a Glasgow signing to promote Watchmen. At the table is Grant Morrison, a neophyte comics writer. It is the only meeting between them that Moore recalls, although he had given Morrison advice at a 1983 Glasgow comic mart when Morrison was on the cusp of transitioning from a failed rock star to a successful comics writer. Moore will eventually, to Morrison’s chagrin, describe him as an “aspiring” comics writer at the time of this meeting, one of many swipes he will take at Morrison over the years. They talk about vegetarianism. (“Sometimes you can’t live with the contradictions, Grant,” Morrison recalls him saying.)

It’s Christmas 2013. Alan Moore, in the course of an interview, offers the stunning transition, “this, I think, leaves us only with the herpes-like persistence of Grant Morrison” before launching into a four-thousand word account of his history with Morrison and concluding that he would prefer if “admirers of Grant Morrison’s work would please stop reading mine, as I don’t think it fair that my respect and affection for my own readership should be compromised in any way by people that I largely believe to be shallow and undiscriminating.” 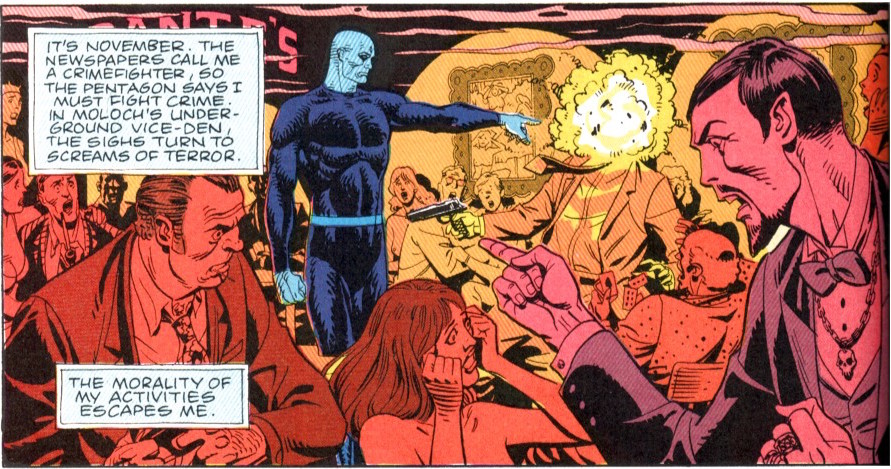 It’s summer, 1992. Alan Moore is thirty-eight. Just a few years out from the twin smoldering wreckages of Big Numbers and his first marriage, he takes a call from Jim Valentino at Image Comics. Moore is unimpressed with the Image output, thinking, “I’ve been away for five years, and comics have turned into some bizarre super-steroid-mutant hybrid that I’ve got no familiarity with at all,” but the business model of Image appeals to him, and the failure of Big Numbers along with a relatively fallow period in Moore’s output means he needs the money, and so he throws himself into “teaching myself this new language and trying to understand this new audience.” He ends up creating 1963 with Steve Bissette and Rick Veitch, a colorful pastiche of vintage Marvel comics written in explicit contrast to the post-Watchmen style (largely embodied by Image itself) of violent and cynical comics.

It’s 1996, and Alan Moore is calling Steve Bissette to end their friendship over comments Bissette made in an interview with The Comics Journal, including some suggesting Moore had lost interest in 1963.

It’s 2010, and the last hope that the final installment of the project, an intended crossover between the 1963 characters and the rest of the Image line will ever come out finally sputters out. 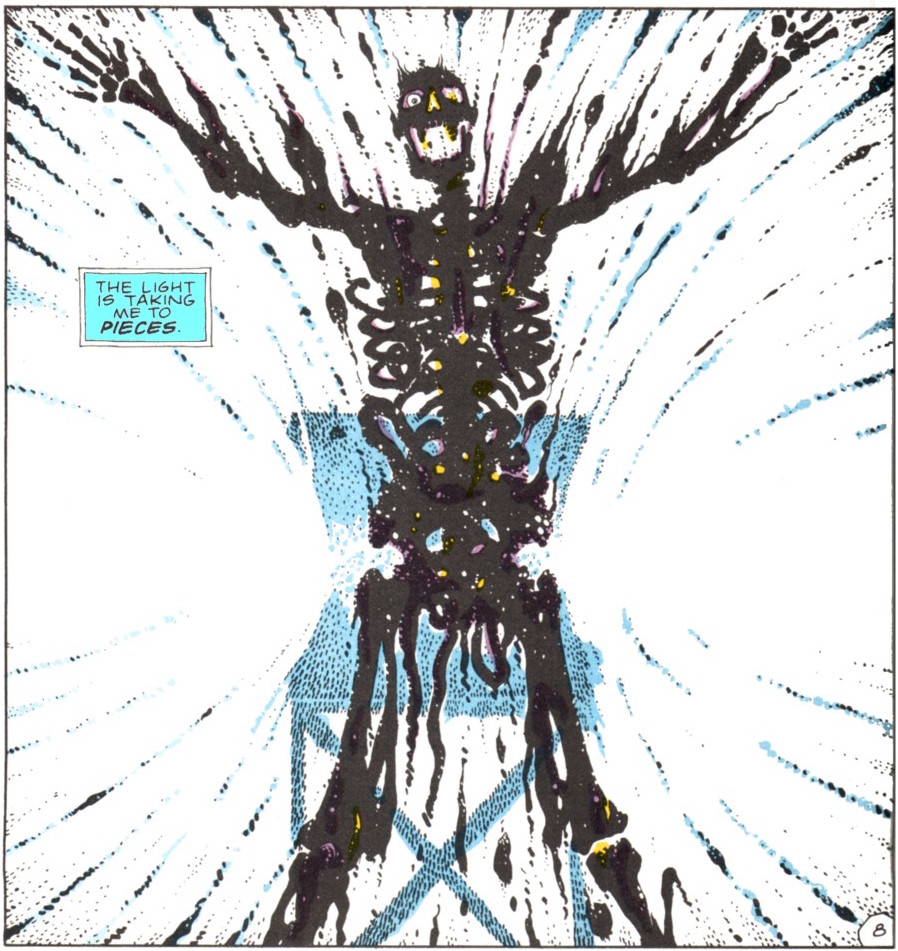 It’s January 7th, 1994. Alan Moore is forty, not two months past impulsively declaring himself to be a magician. He is in London, on Shooter’s Hill, visiting Steve Moore. A psilocybin-infused conversation about the Burroughs/Glysin cut-up method as alchemical process gives way abruptly to spiritual vision. The room itself opens and unfolds into some higher space, the chain of conversation – “an idea that turns out to be connected to another, then another, and the discourse makes its labouring progress upward from one concept to the next” until it reaches some divinity that reveals itself in spite of its unknowability. The city of London opens up to him, its psychogeographic resonances becoming visible, all its ideas and history a tangible, real part of it. Through all of it, there is one strange certainty – the sense that the godhead he has inadvertently scraped against is serpentine in form, “dream-spine, knobbly with conceptuual vertebrae but smooth as viscous liquid in its movement, living chain of muscular and dangerous notion, looping and recursive thought-meat winding, coiling back and forth upon itself, a current dragging helpless consciousness along its length in rippling peristalsis.”

It’s July 16th, 1994. Alan Moore is on stage at the St. Bride Foundation Institute and Library alongside David J, performing as part of a three-night event organized by Iain Sinclair. It is his first public magical working, eventually released on CD as The Moon and Serpent Grand Egyptian Theatre of Marvels. He speaks of Glycon, the serpent he encountered on Shooter’s Hill just 190 days earlier, describing “the parched air oiled with myrrh, a depthless, lidless dark before awakening, but pin lit, scented, pearled in thousands, naked brainstem, arid spine of lightning, fossil stripes the white dunes outside time, his belly filled with understanding, jewel, and poison.”

It’s August, 1998. Alan Moore is forty-four, and on holiday in Wales, having just signed the contracts to create a new line of superheroes for Jim Lee and Scott Dunbier’s Wildstorm imprint. Dunbier and Lee fly out on short notice to do Moore the courtesy of telling him in person that the company has just been sold to DC. Moore, noting that the deal was struck almost immediately after the contracts were signed, and that DC had previously tried to buy Rob Liefeld’s Awesome Comics in order to re-acquire Moore. Despite his intense misgivings (Moore described DC as “a really weird, rich stalker girlfriend”), Moore was unwilling to take the contracted work away from his artistic collaborators, and so agreed to continue producing the comics, albeit with a firm editorial firewall between himself and DC; indeed, a company called Firewall was created to serve as the nominal entity cutting Moore’s checks so that DC’s name wouldn’t even appear on them.

It’s April 2000 and Paul Levitz, by now publisher at DC Comics, is breaking the agreement, stepping in and ordering the entire print run of The League of Extraordinary Gentlemen #5 pulped and blocking a story in Tomorrow Stories #8 over what Moore viewed as minor concerns.

It’s Late 2001. Alan Moore is forty-eight, and being visited in Northampton by Steve Moore. He has come in order to seek clarity regarding his ongoing sexual relationship with the moon goddess Selene, attempting to discern whether she is a sign of his own madness or not by asking his friend whether he can see her too. He sits on his friends sofa and begins to chant. Moore describes the experience: “oh fuck she’s blue, electric ultra-violet blue on her illuminated contours, see-through in the shadows like a special-effects hologram. She’s riding him, she’s straddling his lap, her narrow back is turned towards me and she’s nothing like her picture, nothing like the way he sees her and describes her.” The existence of his lover verified, Moore returns home to Shooter’s Hill the next morning.

It’s March 17th, 2014. Steve Moore is seen alive by his neighbors. Alan Moore describes this as “kind of annoying, as neither Steve nor myself had any axe to grind for ghosts,” although he appreciates the Algernon Blackwood nature of the tale.

It’s June of 2010. Alan Moore is fifty-six, and having his last conversation with Dave Gibbons. Their relationship had already been strained after Gibbons had conveyed a message from DC suggesting that Moore would be “quietly compliant” about the Tales of the Black Freighter motion comic, a phrase Moore took in the context of him having previously asked DC not to play games with Steve Moore (who had previously novelized the V for Vendetta film) as his brother was dying, especially after DC spiked Steve Moore’s planned Watchmen novelization when Moore was less quiet and compliant than assumed. Following this Moore had asked Gibbons to not talk to him about Watchmen anymore for the sake of their friendship. “Alan, got a few minutes? I just want to talk to you about Watchmen,” Gibbons said, before presenting a series of offers from DC regarding either returning the rights to Watchmen or officially buying Moore out in exchange for his sanction of Before Watchmen.

It’s December 2nd, 2011. Alan Moore is fifty-eight, and speaking to Honest Publishing. He is asked about Frank Miller’s then-recent comments calling the Occupy movement “spoiled brats who should stop getting in the way of working people and find jobs for themselves” who “can do nothing but harm America.” Moore decries his apparently former friend, complaining that “there has probably been a rather unpleasant sensibility apparent in Frank Miller’s work for quite a long time,” complaining of the overall right-wing slant of the comics industry and stressing that “me and Frank Miller have diametrically opposing views upon all sorts of things.”

It’s early 1987, and Moore is deciding to walk away from the company for good. 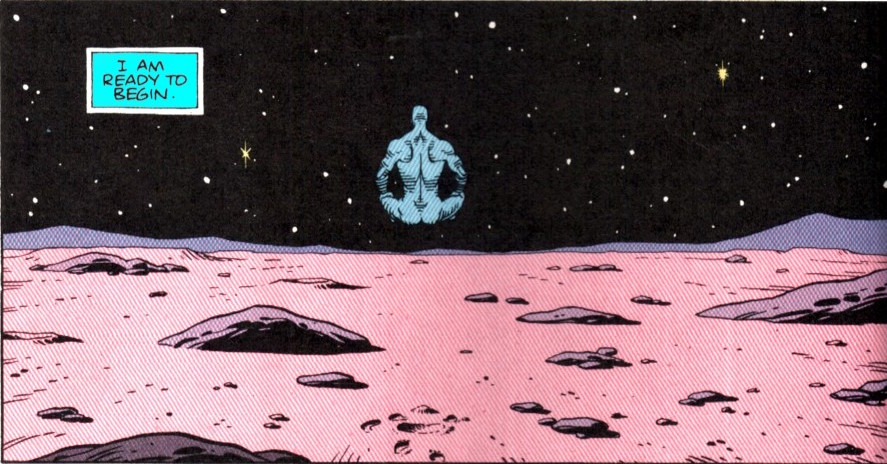 All the same, he stays the course, completing his contracted work for DC and moving on. By January of 1988, he’s done; all the Watchmen press tours and signings are completed. He finishes the introduction to the collected edition, another for the completed V for Vendetta a few months later. He is finished, free of whatever conceptual prison or labyrinth he had been walking in these past five years. He can choose his next project. He can choose not to have a next project. He can do whatever he wants, if only he can discern what that is. 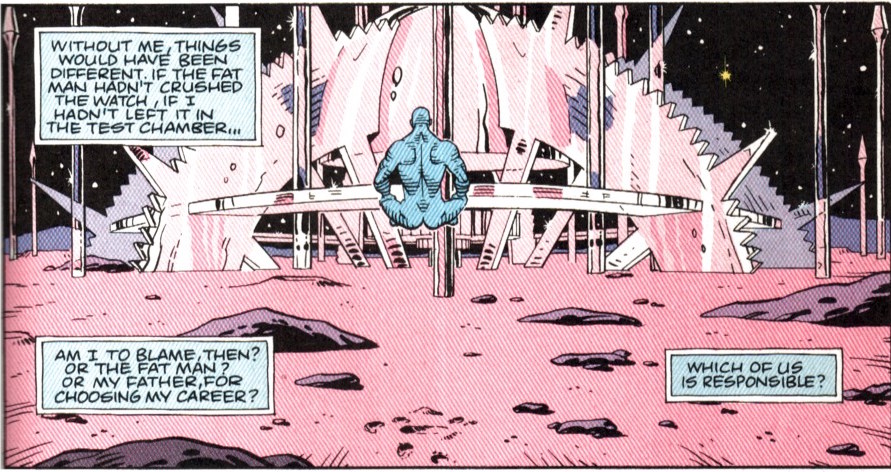 Had he been spoiling for a fight? Trying to prove a point? Was he just a chancing freelance chasing whatever muse flickered before him? What had his ideas meant? Where did they lead? How long had he been climbing the tail of the serpent before he realized it? And where was he actually going? Perhaps there are not answers to these questions. Perhaps Watchmen is less a thing that was done than a thing that happened; less a creation than an event. Perhaps, like the stroke of midnight on the clock printed on the back cover of every issue, it was simply a thing that history approached inexorably. A certainty that could no more have been engineered than it could have been prevented. 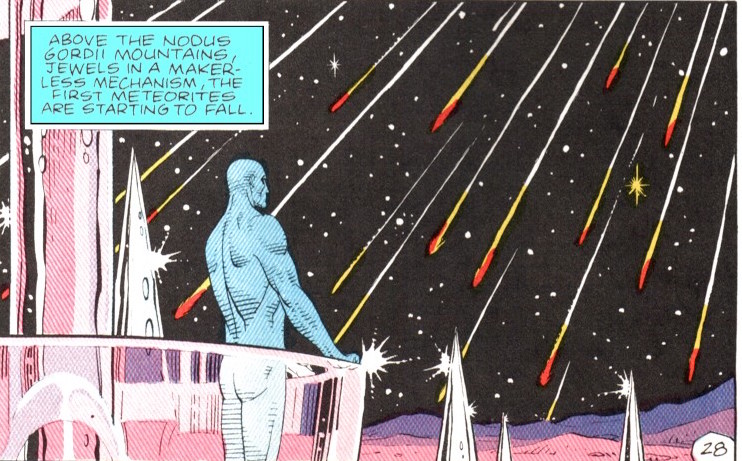 “I can’t fight, for god’s sake. I can’t fight anymore. Marcos told me to think of time as a record player, with the stylus tracing the present, while the past and future exist simultaneously… Neat little analogy, huh? I asked him what record it was, but he didn’t know… Hey, did you hear the one about the nuns?” – Grant Morrison, “The Checkmate Man”

Hey, Did You Hear The One About The Nuns? (The Last War in Albion Book Two Part Twenty-Seven: Nemesis)

I Asked Him What Record It Was, But He Didn’t Know (The Last War in Albion Book Two Part Twenty-Six: Olympus)

While The Past and Future Exist Simultaneously (The Last War in Albion Book Two Part Twenty-Four: Miracleman at Eclipse)