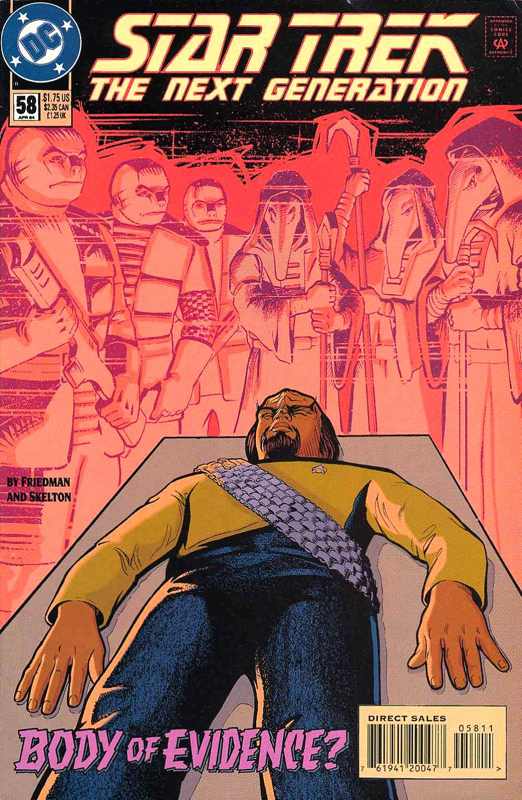 As with all issues of this kind, we begin with a couple of pages of recap from Captain Picard. The Enterprise then sends down three teams to assist the three gestalts in retrieving the missing bodies as per Deanna Troi’s request, each containing a doctor and an engineer (needed to disable the shield generators surrounding the holy sites). While on the ship, Captain Picard asks Reg Barclay to try and track down the base where the crewmembers were captured initially, just in case Deanna’s plan runs into trouble.

Each team has to navigate some kind of harsh environment to reach the holy sites in question. Needless to say, they all make it and everyone gets their body back in one piece. The first team, led by Deanna (in Alexander’s body) also includes Commander Riker and Robin Lefler. As they hop across a series of ice floes in an arctic environment, Will regales his team with tales of an old friend who fell through the ice and couldn’t look at ice cream sundaes for months right before Deanna promptly does that. She’s fine (as is Alexander) though, and no sooner do they fish her out then they come across what they were looking for. Deanna comments on a very literal out-of-body experience.

Doctor Selar’s team (comprised of her, Alyssa Ogawa and Jenna D’Sora), has to navigate through a desert in the middle of a howling sandstorm. Thankfully Selar has figured out how to use Geordi’s VISOR and can lead everyone through the sand no problem, except for Alyssa who stupidly wanders off and gets lost. Thanks to the VISOR though, it’s no time at all before she’s found again. And just as before, the team finds the missing person, the engineer disables shit (while Jenna stands guard) and they beam out. And finally, Ro Laren leads Lwaxana Troi and Doctor Crusher through a dense thicket of tropical jungle. The three most kickass ladies in the crew use their phasers as machetes and fry their way through the undergrowth to reach the temple where Worf is being held (to which Laren kicks the door in to get inside, because you’d better fucking believe she does). On each team, someone comments on how strange it is that none of these places seem to be guarded.

On the Enterprise, Captain Picard is about to contact the Sakerionites to let them know the missing crewmembers have been retrieved safely and to take them up on their offer to put everyone’s consciousnesses back where they belong. But before he does, Reg comes in and tells him he might not want to do that until he hears what he discovered. What follows is one of the worst dumps of exposition in the history of mankind: For the duration of an entire two-page spread, a bunch of Sakerion randos explain in extremely loud and exacting detail about how it was in fact they who orchestrated the whole body-swapping fiasco and framed the Ergeans in order to sabotage their application for Federation membership and cover up the fact the Sakerionites have been exploiting Ergeus’ natural resources and have been effectively using its inhabitants as slave labourers. And naturally, it is the most excruciatingly unnatural and stilted dialog you could ever possibly conceive of. This makes Dirty Pair: The Motion Picture look like an elegant haiku. Thankfully, Worf is there disguised as a body and uses his comm badge to record the evidence the Enterprise crew needs to implicate the Sakerions in their nefarious plot, so we’re spared having to have this all explained to us a second time.

We are not, however, speared having to hear Reg explain how he figured out it was the Sakerions and not the Ergeans behind it all: Something having to do with particle decay of carrier waves or some shit. I read it and even I’m not too sure what happened. And of course, we also need to have an observation lounge scene where everyone has a good laugh and explains in very stilted language about how they were able to relay their findings to the Ergeans, how the Ergeans saved everyone and how the crew will be able to help the Ergeans rebuild their ecosystem and cure the diseases they contracted as a result of the environmental disasters. While the Ergeans are at the table, naturally.

Michael Jan Friedman’s conclusions are never the neatest of affairs, but this one is a really prime example of the problems that happen when you fetishize and privilege technobabble worldbuilding. Star Trek: The Next Generation is actually pretty good about this, as is Friedman: The technobabble is basically used as a handwave to ensure the series’ universe feels consistent and the characters feel competent. The problem this time is that *so much* of the story’s conclusion hinges on explaining the technobabble for the benefit of Nerds instead of simply ignoring it. It’s a problem that’s going to dog Star Trek Voyager from the start. When you get to the point the series becomes about justifying its existence at an in-universe continuity level and you’ve got nothing else to say besides that, you’ve got a real problem.

Thankfully, this story does in fact have a few other things to say. Ultimately, Divided Light is about “walking a mile in another’s shoes”, or in this case, mind, and the book’s last few pages do follow up on this theme. The afflicted crewmembers (and Lwaxana) are sitting around in Ten Forward discussing their recent escapades. This mostly consists of Lwaxana trying to goad Worf into saying whether or not he enjoyed sharing her body and him mostly trying to change the subject, although he does say it was “utterly debasing”. Selar and Geordi get an exchange that could actually be construed as sort of awful if read a certain way: He says there was an “orderliness” about her mind that he enjoyed experiencing, and she brags “all sentient beings are attracted to order, unfortunately, only we Vulcans have so far manage to embrace it”. This is really not the time or place where I want to get concerned about Star Trek taking a hard swerve back into fascism, but it has to be said that reading is there. Those Vulcans are dangerous. Perhaps Geordi liked all the logic and order because he’s an engineer, but that’s concerning too. I’d hoped Geordi would be the playful hacker type of engineer instead of the Scientistic one, and this line is usually better than this at emphasizing this sort of contrast.

What bugs me more here is the story’s failure to pick up on the empathy angle it definitely had going for it in the previous two issues. Alexander gets nary a word in edgewise and Deanna is absent from the table altogether: I’dve thought it obvious to put the two of them together to talk about Alexander’s very clear crisis of conscience at being someone raised a warrior who could suddenly feel the emotions of his enemies. Does this mean Alexander, as Selar suggested, is now pursuing a pacifist path? That would tie nicely into “Firstborn” at any rate. Or does this mean that Alexander is going to become an even better, more true warrior, because real warriors and hunters empathize with their foes? That is *prime* Star Trek: The Next Generation material, and the book shockingly does absolutely nothing with it apart from a passing mention two months back. And Friedman *never* shortchanges Deanna Troi.

Furthermore, the concept of Geordi and Selar respecting each other and knowing each other’s strengths and weaknesses was absolutely a theme in the earlier issues, and this one fails to bring any sort of conclusion to that. I would have thought Geordi and Selar would actually have grown somewhat close, albeit perhaps not to Ro Laren levels (I do appreciate her being here, by the way). Instead, Selar has a typically Vulcan flippant remark about how chaotic and disorganised human minds are, and while Geordi challenges her he does wind up ultimately agreeing, which kind of shelves the topic. The book could have spent probably half to three-quarters of its page length going over these topics in more detail because they definitely warrant it and, after all, this line has done entire issues that are nothing but people talking. We really did not need all those mounds and mounds of scenes of repetitive and stilted exposition and rote plot advancement. I’m at a loss to explain why they’re here and they have a markedly negative effect on the finished product.

Although this is ultimately just a serviceable run of issues for this book, it does raise some especially nagging questions. Far and away the weakest part of this story arc has been the science fiction plot, or, to be more precise, the underlying assumption that the science fiction plot needs to be grounded and explained to us. The textual narrative reason for these people to end up sharing each other’s minds for a brief period of time is ultimately irrelevant, because the real story is self-evidently about understanding one another and re-examining perspectives. The fact that Star Trek so frequently feels the need to sit back and fixate on details and particulars like this is as worrying as it is telling: We’re once again pushing up against the limits of what genre fiction is capable of doing here, and this story gets it from two fronts-The Hard SF notion of futurist technofetishism and the pulp notion that stock but rousing adventure plots are what the masses want to see.

Genre fiction says it’s about the ideas and not the plot, but that argument starts to ring a bit hollow when it ends up privileging its archaic plot structure above all else.

L.I. Underhill is a media critic and historian specializing in pop culture, with a focus on science fiction (especially Star Trek) and video games. Their projects include a critical history of Star Trek told through the narrative of a war in time, a “heretical” history of The Legend of Zelda series and a literary postmodern reading of Jim Davis' Garfield.
like this (poem) Comics Reviews (August 31st, 2016)