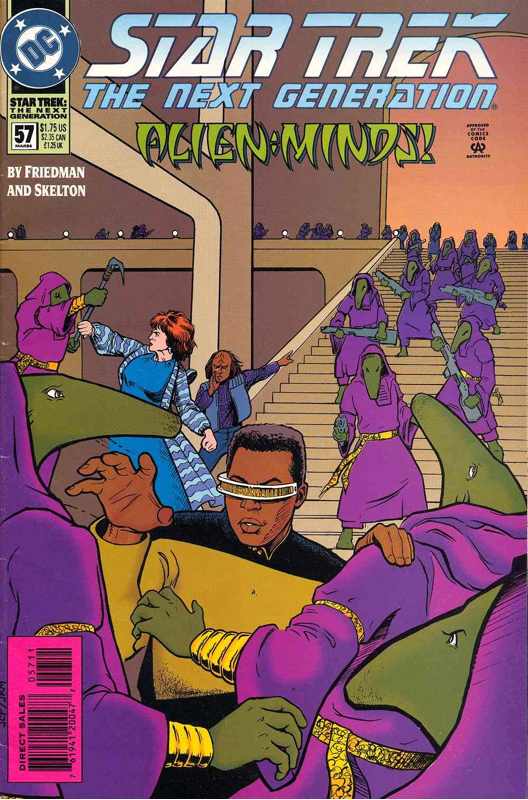 So the Ergeans are really annoyed that Alexander/Deanna, Lwaxana/Worf and Geordi/Selar are up and about, so they order them back to their cells. Worf (as Lwaxana) isn’t having any of that though and, in a single, beautiful moment I *really, really* wish Majel Barrett had gotten to act out, throws his/her head back, yells out a battle cry, body slams the Ergeans and powerbombs all three of them to the mat while bellowing “Cowards! This time you have bitten off a great deal more than you can chew!”.

Frankly if you’re not already sold on this book by the concept of Majel Barrett powerbombing aliens and immediately convinced this series is one of the greatest things in the history of Star Trek, there’s nothing more I can do for you, so you might as well pack it all in now.

Back on the Enterprise, the Sakerions exposit that while outsiders have long believed that the Ergeans were governed by a succession of triumvirates, this is actually not the case. In truth, there was only ever one triumvirate, but they gave themselves functional immortality through a machine that allowed consciousnesses to be transplanted from one body to the next. And due to the Ergeans’ strong regard for life, the donor body’s original consciousness was transplanted as well, so nobody would ever have to die. But over time, the triumvirate grew authoritarian as Ergean society went through hardship, and one day the people refused to transplant their consciousnesses, instead sealing them away in mind receptacles until the time where it was felt they would be needed again. The Sakerions think the Ergeans might feel that time has come, and they’ve chosen the bodies of Worf, Selar and Deanna as the latest “volunteers”. Captain Picard asks if the process is reversable, and the Sakerions say yes (luckily for us they managed to…acquire…the necessary technology from the Ergeans) but they will have to hurry, as the bonds between consciousnesses and their original bodies break down if they are separated for too long.

Down on the planet, the issue’s requisite fight scene is still going on. Selar (as Geordi) is busting some sick action moves until one of the Ergeans grabs Deanna who, as Alexander, is not in much of a position to fight back. It looks like Selar will be forced to surrender too until Worf (again as Lwaxana) unloads a phaser rifle round into his chest from across the room. Lwaxana herself re-enters the picture shortly thereafter, and is decidedly not amused by the alleged indignity of being forced to become a warrior. This is no throwaway joke either, because it’s promptly followed by a truly great scene where Alexander returns to the surface and expresses shock and horror at being able to feel the emotions of his attackers the same way Deanna Troi can, because it makes it difficult to be a warrior. To which Selar responds, “this is why Vulcans prefer peace”.

Geordi comes back and explains that he’s found a way out in the form of a sealed off room with a large energy flow. Because she shares his body Selar could see the same thing, but because she’s not used to seeing the way Geordi sees she didn’t know exactly what she was looking at. But Geordi is quick to explain he couldn’t have executed the Vulcan Nerve Pinch the way Selar can, and Lwaxana begrudgingly points out that Worf’s muscle and enthusiasm will be missed so long as his consciousness remains buried. The team finds themselves in a giant Ergean transporter room, and Lwaxana tries to read their minds for clues as to how to distract them. On the bridge of the Enterprise, Captain Picard contacts the Ergean council with his suspicions, which are summarily and huffily dismissed. Commander Riker begins to organise a series of away teams to clandestinely inspect several “holy sites” that are shielded from sensor sweeps, where it’s more than likely the missing crewmembers (and Lwaxana and Alexander) are being held.

On the planet, Lwaxana is having poor luck. Betazoids can’t read everyone, and that would seem to include Ergeans. Just as Geordi begins to bemoan Selar’s absence, who could have used the Vulcan Mind-Meld, Lwaxana somehow reaches her telepathically and brings her back. Selar discerns how to operate the transporter and kills the lights, guiding the others with Geordi’s VISOR. Alexander and Lwaxana manage to hold off the advancing Ergeans long enough for Selar to locate the Enterprise, and beams them all back aboard safely. In the Observation Lounge, the team fills in the rest of the crew about what happened. Deanna suggests that she, her mother and Doctor Selar might be able to locate their missing bodies due to their telepathic understanding of the link between their consciousnesses and their bodies. But they’ll have to hurry, because that link is already in the process of being dissolved.

What struck me most about this issue is how it’s a frankly remarkable display of teamwork. All six afflicted officers (plus Lwaxana and Alexander) are keenly aware of each other’s strengths and weaknesses and know who among them is most suited to any given situation. Ironically it’s not Lwaxana, who famously and amusingly doesn’t get on well with Worf, who is the best example here: It’s Geordi and Selar who stand out the most on this front, each seeming to have a close and effortless grasp and understanding of the other. In hindsight this is a really clever move for the book to take, reinforcing our “Geordi as storytelling empath” reading” and tying into a certain sort of symbolism the Vulcans have traditionally had: One attractive conception of Vulcans is that they’re spiritually enlightened pacifists very much akin to traditional light elves (whether or not this is technically true given their fixation on masculine Logic and Rationality or just a case of mistaking Spock’s character for a species-wide Hat is something to keep in mind, as it’ll be very pertinent in about seven or eight years), which even ties into that great scene with Alexander early in this issue, so in that regard Selar and Geordi are a very interesting match to watch.

Looking at how these six characters get to know each other better through sharing consciousnesses is a really tantalizing tack to take and it opens a terribly interesting can of worms that I want to examine in more detail later on. But right now I want to focus on how refreshing it is to see just basic teamwork here: In the chapter on Star Trek: The Next Generation Future’s Past and Star Trek: The Next Generation: Echoes from the Past I pointed out how a natural-feeling way to make a video game based on this series would be through a party-based RPG where each party member has a unique skillset that would help in specific situations. And that’s almost what our little gang of six here does, especially Selar and Geordi. But even going back to last issue, it was Alexander who figured out how to escape the shackles, while here Lwaxana helps bring Selar back, and in the last couple of pages it’s Deanna who figures out that the telepathy she shares with her mother and Selar will help them be reunited with their original bodies. I said it was remarkable, but if it is it’s only because, astonishingly, this is something we almost never see on the TV show, or at least we don’t see it often enough that it would be worthy of note. Even in “Emergence” Data basically did everything, and that was a constant problem all throughout the series’ run. And yet it feels perfectly natural for Star Trek: The Next Generation to be doing this. This seems straightforwardly like how this series should operate. So much so we forget that for most of the TV show itself, it didn’t.

Yet another thing the comic book does better than the TV show is its handling of interpersonal relationships. Pretty much everyone who ever wrote for the show famously whined and moaned about how “undeveloped” everyone was, how they didn’t know what any given two characters would have to talk about with each other and how hard it was to write them without conflict. And here we have yet another example of the jobbing comic book writer quietly making them look like the fools they were: This entire issue hinges on the characters knowing each other will enough to understand and value their individual strengths and specializations, and recognise the situations when each of them are needed. These people all rely on each other, and, more importantly, they all respect and admire each other. This is straightforward proof-of-concept stuff. This is really the most basic justification of its existence that Star Trek: The Next Generation needs and always seems so nervously self-conscious about. This is where the real story and its appeal lies, and if you can’t get behind that, then maybe Star Trek, and all of utopian idealism, simply isn’t for you.

L.I. Underhill is a media critic and historian specializing in pop culture, with a focus on science fiction (especially Star Trek) and video games. Their projects include a critical history of Star Trek told through the narrative of a war in time, a “heretical” history of The Legend of Zelda series and a literary postmodern reading of Jim Davis' Garfield.
Resurrection (memoir) Comics Reviews (August 3rd, 2016)