Myriad Universes: Hearts and Minds Part 1: For the Glory of the Empire 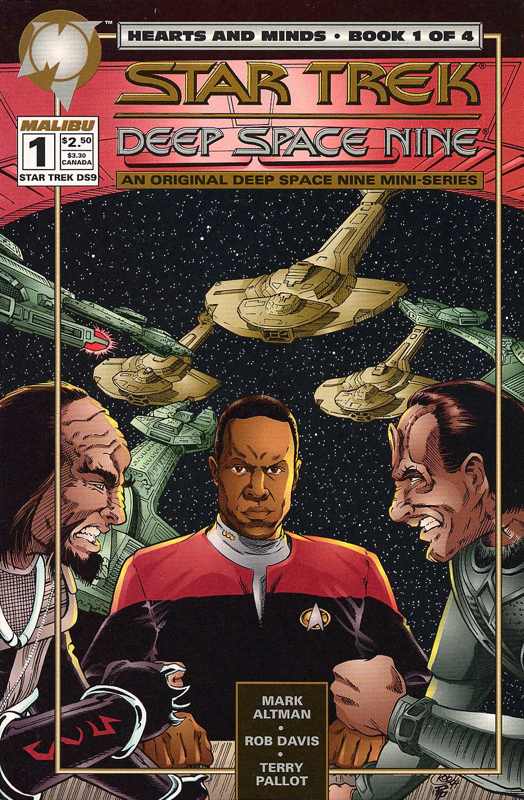 Major Kira is holding down the fort in the Ops office, having a heated argument with a woman who demands she be allowed to open an establishment on the Promenade, even though there are no vacancies. It’s Maura, but if you didn’t read “Requiem” you wouldn’t know that. Just as things are about to get ugly, Jadzia Dax pages the Major to tell her they have a little situation she might want to take a look at. The situation in question is a fleet of Klingon warships, who have Deep Space 9 surrounded.

Kira orders Commander Sisko to be brought up to Ops at once, forcing Ben to give Jake and his baseball game yet another rain check. While still in his baseball uniform, Sisko meets with Captain Kol, the commander of the fleet’s flasghip, the ‘Avwi. As a staunch ally of the Federation, Kol offers his support and protection to Deep Space 9, which he claims will be the most strategic location in the forthcoming war with the Cardassian Empire. This takes Sisko somewhat by surprise, as he had been unaware there was a war between the Klingons and the Cardassians. Kol recaps the events of the prologue for anyone who might have missed it, explaining how their cruiser the K’Tang has been missing for several days, and an investigation has led the Klingon High Council to the belief it was destroyed by a Cardassian Galor Warship in an unprovoked attack. While Sisko presses for evidence, Kol is reluctant to provide any, but declares that he and his crew will stand by him no matter what. As Kol leaves, Sisko and Kira are unconvinced even the Cardassians would be brazen enough to provoke war with the Klingons, and they summon the senior staff to conference.

Over subspace, Commander Sisko express concern to Admiral Kernwill that the Klingons will expect the Federation to support them, and the admiral asks him to hold on until the Cardassians can send a delegation, and they can get negotiator Tal Berel to come out of retirement to sort things out. In Ops, Odo complains his security staff is overstretched dealing with the Klingon delegation, let alone having to handle a Cardassian one on a Bajoran station. Miles O’Brien pulls some people from engineering to help in the meantime, and Doctor Bashir offers his help too. Although Odo brushes him off with a snide remark, Sisko says he has a special mission for him: He and Dax will take the Rio Grande into the Gamma Quadrant to conduct their own independent investigation into the K’Tang‘s destruction to find out who really destroyed it and, if the Klingons are right and it was the Cardassians, why. But before they can take off, a Klingon named Koleth reports for duty. He was assigned to the mission by Kol, which annoys Commander Sisko because he didn’t go through him first. But Sisko lets him on, so long as he agrees to be subordinate to Dax.

As Dax, Bashir and Koleth depart through the Bajoran Wormhole, the Cardassian delegation arrives. Unfortunately, Quark has decided to capitalize on the heightened traffic by hijacking all short-wave subspace frequencies to broadcast advertisements for his bar. To make matters worse, one prominent member of the delegation is none other than Gul Dukat, who is probably not the most pacifistic individual in the Cardassian Empire. In the Gamma Quadrant, Dax exposits that their first stop is Keltara (or as the Klingons call it, The Frozen Death), the K’Tang‘s last known coordinates and where they dropped off a survey team of warriors to train in its icy climates. They start to chat about shore leave and Bashir tries to chat up Jadzia again, which we are mercifully spared seeing once the action cuts back to Deep Space 9, where Sisko welcomes Dukat and mediator Kotan Marak to the station.

At the bar, Quark is at his wits end with the Klingons breaking furniture, when things get worse with the arrival of a couple of Cardassian extortionists who claim the barkeep owes them money in protection they had failed to collect when the empire withdrew from Bajor. But before things can get any more violent, Maura steps up and knocks them around. Over dinner, she begins to offer Quark a proposition, and tries to seduce him into accepting. As Kol and Dukat trade insults over the negotiation table, Commander Sisko tries to introduce Tal Berel on the viewscreen, who starts to deliver a stock speech about the things gained and lost by cooperation as opposed to conflict. But before he can continue, the negotiator lets out a cry of shock, as his runabout suddenly explodes just feet from the station.

It’s tempting for me to give Hearts and Minds perhaps more of a pretense than it warrants. This miniseries, run alongside the monthly Malibu series throughout the summer of 1994, is Mark A. Altman’s defining contribution to Star Trek (at least in terms of actual scripted Star Trek fiction), and it’s hard for me not to talk it up to the point I overhype it. The reason for this is that Hearts and Minds is the single most crucial and definitive Star Trek: Deep Space Nine story for me, because this is the story that made finally made me a fan of Star Trek: Deep Space Nine. It is a preposterously ambitious and overreaching myth arc that pits the Klingons and Cardassians in an interstellar war that threatens to destabilize the entire galaxy paired with an adventure story spanning both the Alpha and Gamma Quadrants. All throughout the summer Malibu boasted how this was a story the TV show could never do and that you could only see in their book, and they were right. The VFX budget alone would have been astronomically prohibitive, but frankly, I don’t think Paramount had writers who had the necessary chops to do something like this anyway. A thesis I argue is supported by the fact the very next year Star Trek does in fact attempt to depict a war between the Klingons and the Cardassians as a lead-in to their own galaxy spanning war arc and proceeds to fall completely on its face in the process.

But more importantly, this is a story that gives each and every person in our cast a myriad of opportunities to be incredibly, breathtakingly heroic (well, with one important exception, but we’ll get to that). If there were any doubts I may have had about whether this new Star Trek deserved my attention, respect and admiration, they were all thoroughly dispelled and laid to rest at the culmination of Hearts and Minds. Although that said, revisiting it today there doesn’t seem to be *all* that much of this in “For the Glory of the Empire”: Like all first issues of stonking great story arcs, this one has the burden of setting up its premise and putting the pieces of the plot in place, and while it opens and closes on two bombshell revelations, most of this issue is comprised of Altman putting people where they need to be so that their individual subplots can be set into motion, and there isn’t a ton of development in any of them. In fact, back when I first read this miniseries in 1994, I was missing this issue as well as issue 3, and in hindsight I actually didn’t need it to infer what was going on and extrapolate back, which is maybe telling.

(Missing issue 3 by contrast ended up to be far more damaging, but, as I said, we’ll get to that.)

But let’s stop and take a look at “For the Glory of the Empire” from the perspective of someone who knows exactly how the rest of Hearts and Minds is going to play out (and I do. I know this story better than the back of my own hand). Of the supporting cast in introduces, Kol and Kotan Marak are the immediate standouts, as well they should be: Kol is wonderfully charismatic, but also frighteningly bloodthirsty, which makes for a potent combination. Marak is well-positioned as Gul Dukat’s opposite, seemingly being a true negotiator and the person who genuinely does have an investment in bringing about a peaceful resolution to the conflict, which nicely sets up his more ambiguous portrayal in the next issue. Maura is obviously evil, almost a cartoon vamp, especially if you read the prologue, whereas she seemed at least a bit more mysterious to me without that context. Koleth is a bit of a joyless dick here, but that only sets up his later character development. And it’s interesting to see Tal Berel as a character, albeit briefly, instead of “that dead guy” whose body is the macguffuin at the heart of the whodunnit plot that makes up the rest of the series.

Among the regulars, there’s no one person in particular who stands out as the book has to move so quickly through setting up all of its plots. Dax is smart in every sense of the word, slightly foreshadowing the dramatically increased focus she’s finally about to get. But if there’s one image that sums up “For the Glory of the Empire” and its great expectations, its Commander Sisko staring at the viewscreen with grim understanding and resolve as the runabout carrying Tal Berel, and perhaps the only chance at stopping all-out war, explodes before his eyes.

L.I. Underhill is a media critic and historian specializing in pop culture, with a focus on science fiction (especially Star Trek) and video games. Their projects include a critical history of Star Trek told through the narrative of a war in time, a “heretical” history of The Legend of Zelda series and a literary postmodern reading of Jim Davis' Garfield.
Pex Lives 36: The Curse of Peladon, or, #imwithher Comics Reviews (October 19th, 2016)