Myriad Universes: Hearts and Minds Part 2: On the Edge of Armageddon 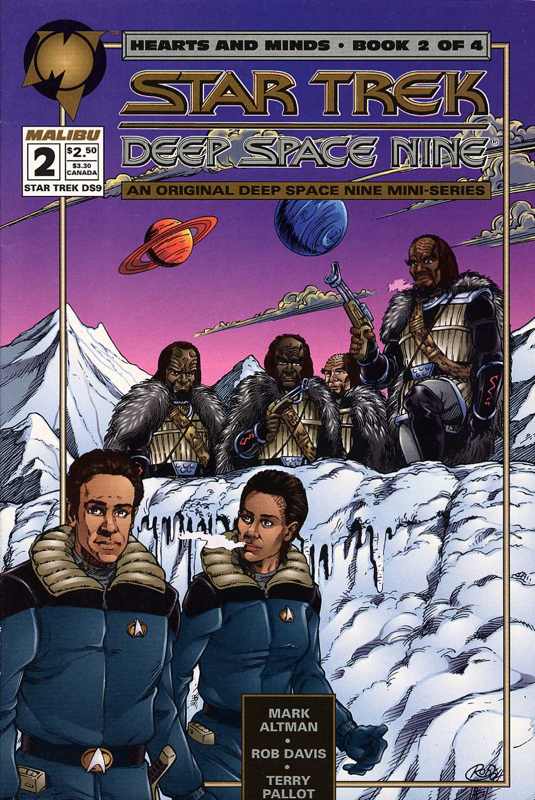 There is no time to process what has just happened. No time to even be shocked about it. Not only has the dust not cleared from the explosion onboard the runabout that killed Tal Berel, but it actually hasn’t even finished exploding yet before Kol immediately blames Marok for assassinating the ambassador. An indignant Marok fires back, demanding Kol explain why he feels the Cardassian Empire would have any reason to destroy a Federation runabout and murder a mediator. Kol threatens to kill Marok where he stands, to which the Cardassian diplomat basically says “bring it” before Commander Sisko intervenes, breaking up the fight and imploring the delegations to stand down until an official investigation can be launched.

But Kol is not having it, demanding Sisko and the Federation back the Klingons because of their treaty arrangements. But for his part, Marok tries to manipulate Sisko into siding with the Cardassians, claiming that the Cardassians and the Federation have always been “brothers in spirit”, and transparently threatening him with Gul Dukat’s presence, claiming that he “would hate to see him get a chance to sit down in his old chair again”. Meanwhile in Quark’s, it’s after hours, but the titular Ferengi lets Maura in anyway, and that’s before she reveals she has a case full of gold-pressed latinum, plus more on her ship, that she’s willing to give him if he sells her the bar and leaves Deep Space 9 for good.

In the Gamma Quardrant, Jadzia Dax, Doctor Bashir and Koleth have arrived in orbit around Keltara, the last planet the K’Tang was known to have visited before being destroyed. They beam down to what looks like a frozen wasteland, but then Bashir gets attacked by a giant purple snow beast and is saved by a member of the survey team the K’Tang left behind. Koleth and Dax fill the landing party in on the situation, but the commander is adamant that the Cardassians would never dare make war with the Klingons. Koleth tells the commander that he had privileged access to the K’Tang‘s distress beacon, which claimed that while the Cardassians attacked them, their weapon and defense systems had already been sabotaged prior to their opening volley. Dax is irritated that Koleth didn’t find it necessary to share that information with her and Bashir, his nominal commanding officer and crewmate, but before she can reprimand him the commander of the away team begins to mount a defense of his team, the surviving K’Tang crew. Dax reassures the commander that in no way is she accusing him or his crew, but rather wanted to ask if he knew where the K’Tang was scheduled to go after leaving Keltara, as Captain Krek never filed a proper flight plan. The commander points them to Caldonia 3, the best place to restock and get information on this side of the wormhole.

L.I. Underhill is a media critic and historian specializing in pop culture, with a focus on science fiction (especially Star Trek) and video games. Their projects include a critical history of Star Trek told through the narrative of a war in time, a “heretical” history of The Legend of Zelda series and a literary postmodern reading of Jim Davis' Garfield.
The Genocide of the Vampires Faeces on Trump 3