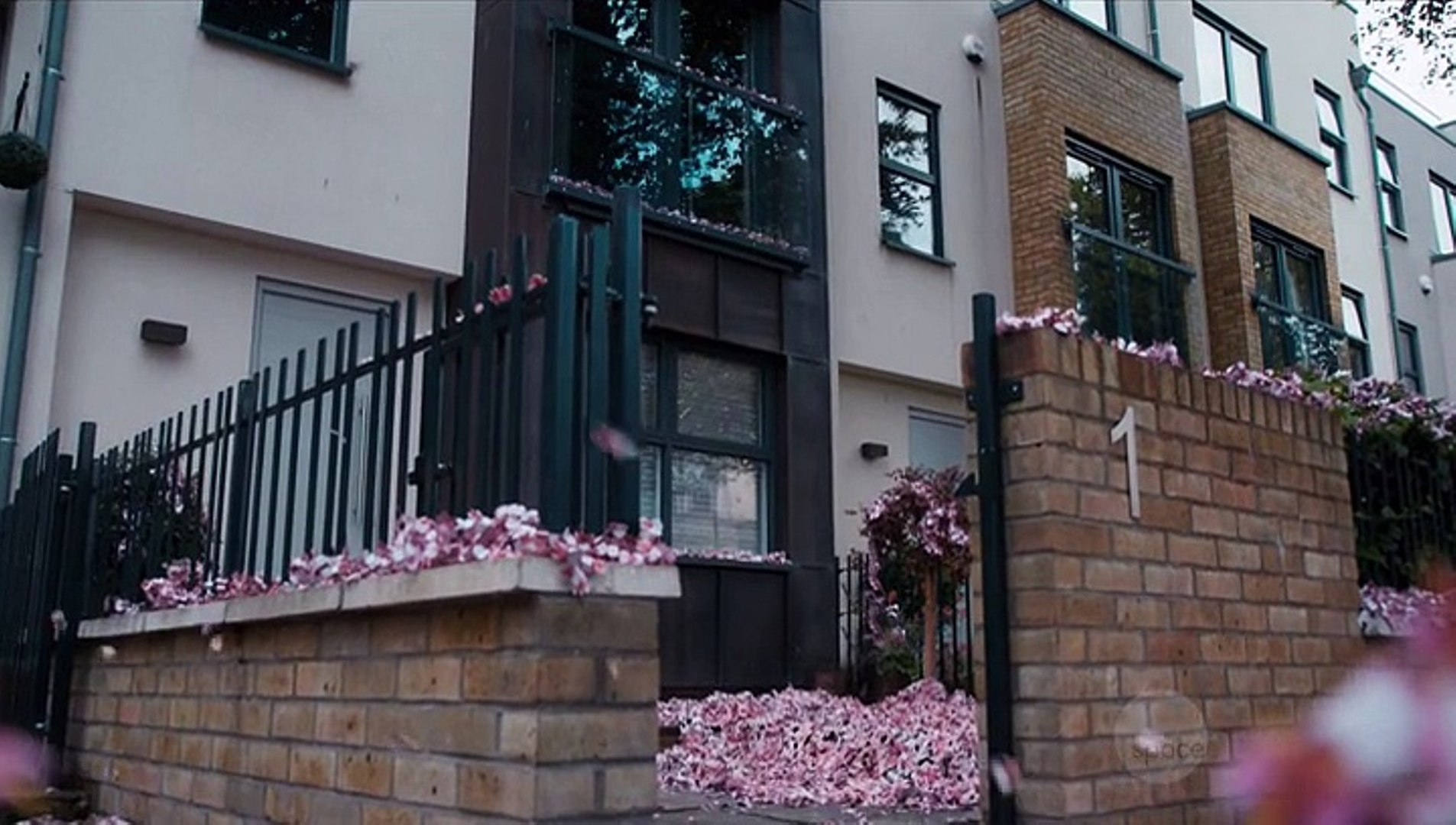 Let’s start with the basic structural oddity: a midseason two-parter in an eight episode season. This means that there’s never really a sense of momentum in the show. Its apparent initial pattern of being a monster-of-the-week show that picks a focus character each week is discarded. The subsequent structure of the next two episodes, in which the cast is split to do a bottle episode and an expensive episode that takes place at the same time, is too singular to establish a new pattern. This could be a compelling gambit of a show that has no pattern and is constantly surprising the viewer, but as we’ve seen, Class just isn’t that show; its source material is all about the repetition of patterns, and indeed the ritualized reiteration of their basic structure is part and parcel of their fun. Class instead blows up its patterns before it’s really established them, and ends up feeling like a dilettante, flitting from structure to structure without ever honing one to the point where it shows off its full potential.

The obvious solution to this would have been to rethink the arc of this, either splitting the Shadow Kin plot over two prospective seasons so that the big two-parter comes at the end of the season or reducing this middle beat to a single episode. Certainly the underlying structure of this, with its parallel crises and perpetually escalating stakes, is well-suited to a finale. (Indeed, this is more coherently imagined finale than “The Lost” will end up being.) This would have forced the show to build and use its status quo for a few more episodes, and then allowed for enough of a shift following this as Quill is let off her leash. The biggest problem is that you’d lose the next episode in this structure, as it’s unimaginable as a season premiere, and of course that the show had flopped by its second episode and was never going to get a second season anyway. Well, that and it would (assuming the show continued to build to the same basic plot beats and just took longer to get there) involve spending two seasons on the Shadow Kin.

Indeed, this is the even larger problem with a midseason two-parter in the course of an eight episode season: it leaves the show stranded with four episodes about the fucking Shadow Kin. We talked back in “For Tonight We Might Die” about the basic pointlessness of creating a monster that’s “the Vashta Nerada only stompy.” Here, however, the concept deforms into something more or less reducible to “goth Klingons.” There’s some nice gestures to something more interesting, such as their planet being called the Underneath (apparently because it’s “underneath the universe”), but there’s no sense of what that means, and as a name it sounds like the show is just very hastily ripping off Stranger Things. These are just angry warrior aliens, with a design that is, while probably not outright racist, way more uncomfortably close to blackface than a show this woke ought to be doing. They’re not more threatening than the Lan Kin (and what the fuck is with naming monsters in two consecutive stories the ____ Kin? Also, does this mean that the joke of the Lan Kin, who were after all a giant tangle of tentacles, was that they are kin to Local Area Networks? Can we play Doom on them?) or the murderous coach. Hell, they pale in comparison to this story’s carnivorous flowers, which are a fantastic concept that, by the time things escalate to “Brave-ish Heart” and we get people staggering around covered in blood as they’re eaten alive by flowers, both the most effective use of the show’s ability to portray gore and its one properly iconic and indelible image.

With such a soggy foundation, there is only so much you can build. “Co-Owner of a Lonely Heart/Brave-ish Heart” tries, and tries with the sort of “ah, bless” wholesomeness that one expects from Class, but the fact that what it’s trying is to do compelling and epic drama about the Shadow Kin fundamentally puts a cap on its ambitions. The good bits, like Ram’s total nonchalance after getting caught having sex with April and April’s repeated puncturing of his tough guy normativity as just a bunch of lines are substantial, as is the fact that he’s ultimately entirely useless to the resolution of things and really does just tag along spouting mostly unhelpful cliches at April).  Similarly, the resolution of April’s plot with her father is nice in that it’s finally a clear decision to come down on the side that you don’t have to forgive your abusers. And the “Corakinus wants to cuddle after sex because of his link with April” joke is solidly funny, even if it comes at the expense of a particularly coherent idea of how the Shadow Kin’s culture is supposed to work. but they ultimately get lost in the face of an episode whose most fundamental decisions prevent it from ever transcending mediocrity.

The same goes for Charlie’s plot. The central tension of it—using the Cabinet of Souls to wipe out an otherwise insurmountable enemy—is… well, actually it’s a drab cliche that we’ve seen too many times. But Class spices things up by treating the position that wiping out the flowers and/or the Shadow Kin would be an entirely reasonable act. This is not at all how these sorts of shows are supposed to view morality. There’s the usual waffle about staining Charlie’s soul and all that dull stuff, but underneath it the case for killing the murderous genocidal species that slaughtered your people for sport is taken seriously. More interestingly, Charlie’s reticence to commit genocide is intriguingly undermined as moral high ground by the open criticism of the fact that he keeps Miss Quill as what is blatantly a slave. The narrative defaults to a degree of skepticism about Charlie that prevents it from ever falling into the amoral pacifism that is the default of these shows. (I am, for what it’s worth, more inclined to pause in the face of genocide than in the face of most violence against unambiguous evil, but the Shadow Kin are pretty clearly at the same basic moral level as Daleks, and my position on the “have I the right” debate has always been that Sarah Jane was right.)

And Charlie’s plot is further enhanced by the addition of Dorothea, who immediately announces herself as a useful, if somewhat one note character for the show. It’s immediately evident how much the show has been suffering from the degree to which the titular school is weirdly blase to all the events happening at it. Its initial setup is basically that of Buffy—everybody knows that something’s up with the school but the details are mysterious to everyone but our heroes. But in a show as nominally trope-savvy as Class, this kind of willful obliviousness was a quietly awkward fit. Its replacement with a still very genre normative mysterious organization that knows more than it should is… well, it’s actually just the jump to Buffy season 4, but it’s still a fresher and more nimble-feeling take on the structure. More to the point, Dorothea is a satisfying antagonist. Pooky Quesnel approaches the job with an appropriate amount of camp relish while still managing to remain a figure of understated menace. She’s no Missy, but she largely works and adds something to the show that had been missing.

But for all of this, it ultimately gets wrapped up when April swoops in to save the day. And April’s plot, in turn, hinges on the utterly un-sold concept that she can take Corakinus in a fight, which is a much heavier lift than the show seems to imagine. There’s a frankly bewildering failure to get all the pieces to come together here—a point where the show starts simply dropping plot beats into place not because they make sense or are saying anything useful but because they look more or less like the sort of plot beat that’s supposed to go in that spot. It’s a bad sign and yet another parallel between Class and the looming Chibnall era.

A final note that needs discussing is the plot point of April’s mother regaining her ability to walk. There’s a lot going on here, and it’s difficult to come to a simple conclusion about it. At base level, a “fix the disabled person” plot is a bad look. But this becomes subtler when you note that this is a plot being done with an actually disabled actress in Shannon Murray. Ness has said that his goals were to do precisely this and give a disabled actress material she wouldn’t normally get, which has a ring of nobility to it. But of course, ultimately material a disabled actress would normally get is nothing at all, and taking away the disabled representation in the part isn’t really helping that. On top of that, because the character now requires an effects shot to use the effect is still to minimize her ability to appear. Ultimately, the decision serves as a microcosm for the show as a whole: well-intentioned but simultaneously too clever and too foolish for its own good.

L’Amour Looks Something Like You I Don’t Speak German, Episode 6 – Christopher ‘the Crying Nazi’ Cantwell, Part 2