TARDIS Eruditorum will return on March 19th. But as a prelude, we’re rerunning lightly edited versions of some old essays from the earliest days of the Patreon, now reskinned as the Outside the Government essays for Series 3 of Sherlock. I would also be remiss if I did not note that we are in the final 48 hours of the TARDIS Eruditorum Volume 7 Kickstarter, and it’s a nailbiter whether we’ll make all the stretch goals. 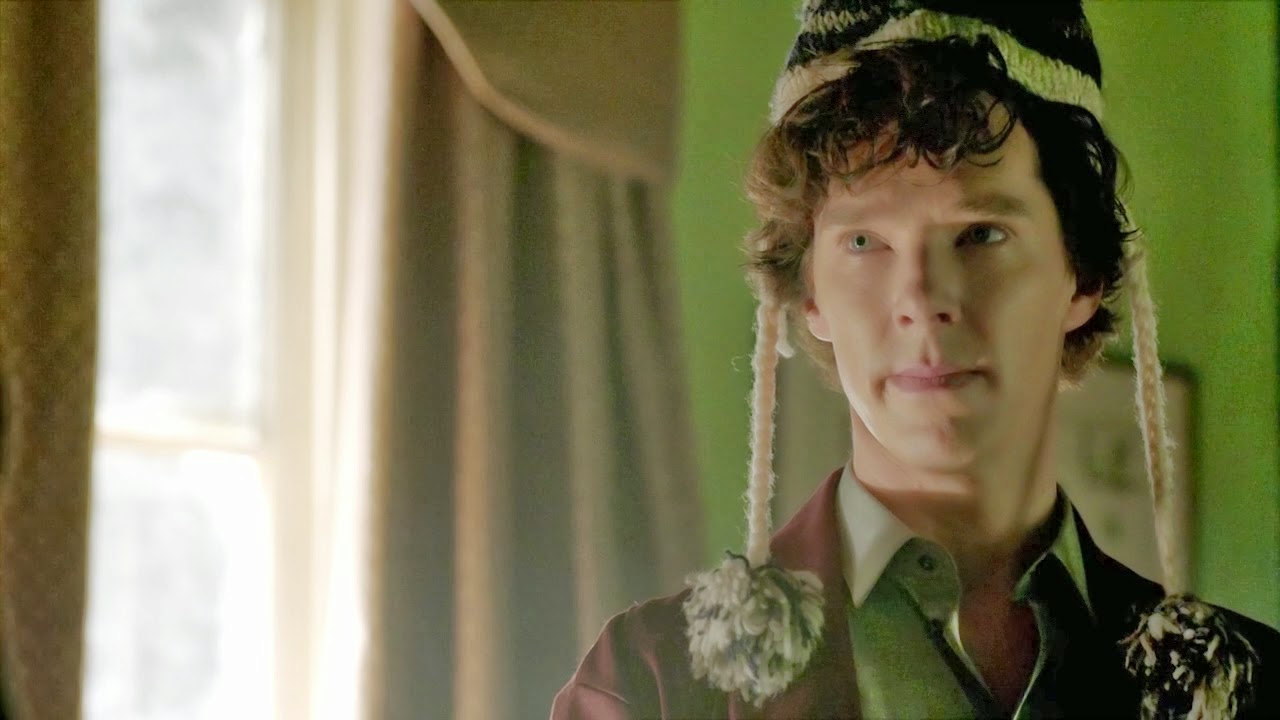 It’s January 1st, 2014. Pharrell Williams’s “Happy” has unseated Sam Bailey at number one, while Eminem and Rihanna, Lily Allen, Ellie Goulding, Katy Perry, and One Direction also chart. In the news, since Matt Smith got old and died it’s been exceedingly quiet. Obama signed a budget deal, marijuana was legalized in Colorado, incandescent light bulbs became illegal to sell in the United States, and Latvia adopted the Euro. While on television, Sherlock informed the audience that it was going to lie to them, and then went on to do just that. It had, in the tradition of fair lies, given ample warning. “It’s a trick. Just a magic trick.” And so, of course, it was. Indeed, The Empty Hearse is in effect a ninety minute exercise in arguing that the question of how Sherlock survived The Reichenbach Fall is irrelevant, or at least largely uninteresting.
To call this a bold response to one’s own iconic pop culture moment seems an understatement. And the reactions at the time are worth recalling, even if it is only a year on. First and most interesting were those who felt that The Empty Hearse was mean-spirited in its treatment of fandom, a criticism that focused especially on the depiction of slash fiction within the episode. And yet it’s difficult to quite articulate what about the portrayal of slash fans is offensive here. The only person to really mock them is Anderson, and Laura’s observation that her Sherlock/Moriarty slash is no more ludicrous than some of Anderson’s own theories is, in the context of the story’s larger attitude towards the idea of “solving” Sherlock’s survival, significant. She, at least, is in on her own joke, which Anderson never gets to be.

And it is, ultimately, the joke that’s at issue, which is where this episode’s boldness comes in. That The Empty Hearse was going to be read largely in terms of how well it resolved the cliffhanger was, of course, a foregone conclusion. You don’t get to have that kind of media coverage and then not be judged on how you stick the landing. Devoting an entire episode to it instead of, as they had with the cliffhanger of The Great Game, lampshading it with an absurdly trivial resolution was a necessity. But what wasn’t necessary was making The Empty Hearse into a ninety minute exploration of what it means to resolve the cliffhanger in the first place.

Which brings us to the second reaction, the accusation that the story was self-indulgent. Which misses the point in many ways. Yes, three separate flashback sequences of “how Sherlock did it” are a bit self-indulgent, but this is clearly the purpose of the exercise. The resolution isn’t how Sherlock did it, it’s Sherlock and John making amends over a ticking time bomb, hence the cut to the “actual” explanation (which may or may not be the actual explanation, but is fairly clearly the explanation they had in mind when they filmed The Reichenbach Fall) in the middle of the climax, so as to hammer home the point about what actually matters in resolving the cliffhanger.

This gets to the third interesting reaction at the time, which was the degree to which this episode’s best case scenario was clearly “not failing.” It was generally judged to have done so, but praise for the episode was thin. It was designed to get the highest ratings of Season Three, but even before The Sign of Three it was also fairly obviously designed to be the least important one—the one that tied off the unfinished business of Season Two and cleared the decks for the other two episodes, one of which, we should recall, was only four days away anyway.

The snarky thing to say right now would be “plus it was the Gatiss episode,” although that’s unfair in the context of Sherlock in particular. Nevertheless, it’s worth remarking up front about the implications of moving the Steven Moffat episode to the end of the run. There is no reasonable understanding of the Moffat/Gatiss partnership in which Moffat is not the senior partner. He’s emphatically Gatiss’s boss on the other show they work together on, he co-owns the production company, his wife and mother in law are executive producers, and, more broadly, literally nobody, one suspects Gatiss included, actually disputes that he’s the far better writer. In Seasons One and Two he wrote the big showpiece episode that got the bulk of the attention and praise, and, as you’d expect given the usual graph of television ratings over a season, he went first. This time, however, he’s moved to the final slot, with Gatiss getting to do the one everyone is going to pay attention to.

It’s cruel to suggest this is setting the show up for disappointment, not least because Gatiss’s approach—making the story about storytelling—is so close to what Moffat would do. But there is a clear sense of disappointment built into the episode, hence the immediate admission of lying.  Because the real crux of this is why it doesn’t actually matter how Sherlock survived. For one school of thought, this was a point of maximal hubris: how dare you build up a cliffhanger for two years and then declare that it doesn’t actually matter? But, of course, the episode ultimately makes a fairly compelling case, demonstrating that it’s not actually very hard to come up with ways Sherlock could have survived, and that, indeed, people had spent the last two years coming up with a near-exhaustive list.

And then there’s the other school of thought – the one that says that Sherlock is a show about the relationship between two people, and that the entire point of using Sherlock Holmes as the vehicle for this is because the actual act of deducing things and solving mysteries is effectively trivial. This, it’s pretty obvious, is the school of thought that the actual people making Sherlock subscribe to. And so in the face of a cliffhanger mystery that threatened to consume the entire definition of what the show was, this sort of retrenchment was absolutely vital.

And in hindsight, it’s what turns out to be most important about this episode. Watching Amanda Abbington’s performance with knowledge of what’s to come is fascinatingly revealing – her delivery of the line where she notes that of course Sherlock told Molly he was alive, because he’d need a confidant is delightfully nuanced – you can see her own version of John and Sherlock’s addiction to what they do as she finds herself instinctively playing along with Sherlock, providing the basis for her beautifully delivered “I like him” in the cab to John. This is clearly what the show would like to be doing, and fair enough – it’s appreciably more exciting than a ninety minute tease to get us back to the point where we actually have a functional show again.

It seems silly to complain that The Empty Hearse is bad, not least because it isn’t. It’s easily the best thing Gatiss has written up to this point. But it’s ninety minutes of retraining us to watch Sherlock—reminding us that this show is a shell game about how many steps ahead of the narrative Sherlock is, in which everything we see is game for a sudden forced reevaluation. Gatiss fills the intervening moments well – the choice of the Underground setting based on seeing Web of Fear is sweet, not least because Gatiss is right that it provides good imagery – and the fact that they do the Giant Rat of Sumatra case is both a nice nod to Sherlock Holmes canon and a charming Doctor Who joke.

More substantively, there are some great character moments both small (Lestrade’s reaction to Sherlock’s return, John apologizing to Mrs. Hudson in an inversion of the train scene at the end) and large (Mycroft and Sherlock’s game of deductions). At every turn, this is better than it needs to be. But it is, I think, the episode of Season Three where it doesn’t feel like their heart is in it, and when they’re stuck doing what they have to do instead of what they want to do. The result is a beautifully made clearing of the throat, to which the only real response is “fair enough, what’s next?”

Your Favourite Audio To Switch a Witch